Now suppose that \(w = i\theta\), where \(\theta\) is real, then rearrange into real and imaginary terms;

The real and imaginary parts are expansions of the cosine and sine functions respectively, therefore, if \(z\) is a complex number

Figure 4 shows the relationship in diagrammatic form. This equation was discovered in 1748 by the Swiss mathematician Euler, and is extremely important as it crops up everywhere from quantum mechanics to X-ray diffraction in crystals and other phenomena connected with waves.

De Moivre’s theorem can be derived from these equations: the power of a complex number \(w\) is

which some consider the most beautiful equation in mathematics, as it connects the most important numbers of mathematics \((0, 1, i, e\), and \(\pi)\) and uses the most important operations (multiplication, exponentiation, negation, and addition). Furthermore, an integer is produced by raising an irrational number \(\pi\) times the imaginary unit \(i\) to the power of another irrational number, \(e\). It is not at all obvious why this connection exists from an arithmetical standpoint, but from a geometrical one it is clearer. Consider a circle of unit radius on an Argand diagram; as the angle \(\theta\) increases from \(0 \to 2\pi\), the modulus (radius) is \(1\) when \(\theta = 0\), and is \(i\) when \(\theta = \pi/2\), and \(-1\) when the angle is \(\pi\) and so on; see figure 4.

Sum and product of the roots of unity#

Figure 5 shows the five roots of unity. The sum of these roots, provide there are two or more, is zero, which can be intuitively seen by looking at the image. A geometric argument is that each root can be considered as a vector based at \((0,0i)\) and their sum will be zero as each is equally spaced from its neighbour.

Euler’s formula is important in science, because it permits the description of a sinusoidally varying real quantity by means of complex exponentials as in Fourier Transforms described in Chapter 9. This change simplifies equations, because it is far easier to manipulate exponentials than trig functions. For example, the general form of a sinusoidally varying quantity, such as a plane wave, is \(f (t) = a_0\cos(\omega t - \theta)\), where \(a_0\) is the amplitude, \(\omega\) the frequency, and \(\theta\) the phase. These are all constants, and \(t\) is time and is a real variable. The equivalent complex function is

therefore \(f(t) = Re(g(t))\). Very often in chemistry and physics, the complex form is used without explicitly stating that it is only the real part that represents the waveform. Figure 7 compares these waveforms. 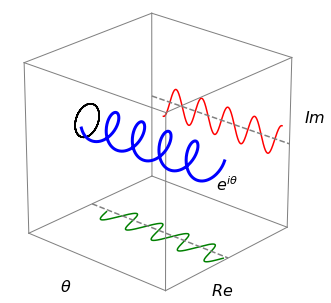 Figure 7. Visualizations of the complex number \(e^{i\theta} = \cos(\theta) + i \sin(\theta)\) illustrate that it has a wavelike form.

(iv) x-ray diffraction intensity. The Structure Factor In chapter 9, (Fourier Series and Transforms) and in section 13.6, x-ray diffraction by a single crystal is described. The structure factor \(F\) described how the intensity of a given ‘reflection’ is related to the coordinates of the atoms in the unit cell via the Miller indices \(( h k l )\) of the planes of atoms. The Miller indices are integers that can be positive, zero or negative. The planes of atoms occur because the unit cell is repeated throughout the crystal to form a lattice of points. The unit cell is the smallest arrangement of atoms from which the whole crystal can be constructed.

The fractional position of an atom is \(u,v,w\) making the scattering factor the straightforward formula

but it is often easier to use as eqn 21.

The intensity of the diffracted spot is \(I=|F|^2=F^*F\) which means that the series of terms in \(F\) has to be multiplied by its complex conjugate. The term \(f_i\) is the atomic scattering factor for each type of atom relative to that of a single electron. It is the electrons in an atom that predominantly scatter the x-rays and so \(f_i\) is proportional to the number of electrons, so is larger for heavy atoms than light ones. See Chapter 9-13.6 for details. Notice in particular that the structure factor does not depend on the shape or size of the unit cell, but on the fractional positions of the atoms.

The fact that the detector, e.g. CCD or photon counting array, always measures the intensity \(F^*F\) is the reason the phase problem exists which makes interpreting X-ray diffraction data somewhat complicated. To illustrate, if there are only two atoms then eqn. 21 becomes

where we let \(\beta_i=hu_i+kv_i+lw_i\) for clarity. The intensity is therefore

and we know \(f_0\) and \(f_1\) as these atomic structure factors can be calculated. However, with one measurement there are two unknowns in the difference term. The \(hkl\) values are known from the positions of the diffracted spots on the detector ( the image has been indexed ), and so a second measurement can be made with different \(k,h,l\), producing say \(\beta_1-\beta_2\), but the atomic positions are the same and this process can be continued producing a set of difference equations which can be solved until the structure is determined, i.e. the \(u_i,v_i,w_i\) are known. In particular cases some simplification is possible as shown next.

In figure 7a (left) is shown a unit cell of an orthorhombic crystal, this means all angles are \(90^\text{o}\) and the sides are of unequal lengths \(a, b, c\). An atom is at each corner and one atom in the base of the cell, (The second (top) atom is the base of the unit above). On the right is a body-centered unit cell.

Figure 7a. (a) Base-centred and (b) body-centred orthorhombic unit cells.

In the base centred unit cell there are only two distinct atoms positions located at positions \(0, 0, 0\) and at \(1/2, 1/2, 0\) and together with their the axes \(a,b,c\) will produce the crystal structure. We shall consider that the atoms are of the same kind and so the atomic scattering factor is the same.

The series for \(F\) has two terms which are

Although we can form the complex conjugate and calculate

The direct calculation is

(v) NaCl structure factor. The NaCl crystal has a cubic structure with \(4\) Na and \(4\)Cl in the unit cell. The coordinates (as fractions of the unit cell sides) are

and then the structure factor is the sum

The intensity \(F^*F\) will contain \(16\) terms and we could go ahead and calculate all the exponentials which because \(h,k,l\) are integers will be \(\pm 1\). This suggest that some simplification is possible and this is true for the chlorine terms where \(e^{i\pi(h+k+l)}\) can be factored out giving