The integrals so far studied have the form \(\displaystyle \int f(x)dx\), which means that integration proceeds uniformly along the x-axis. Now suppose instead that we wish to integrate along some other direction, such as any curved line that is in the \(x-y\) plane. This is not as obscure as it may sound. When you ride a bike, the force needed to keep you moving will obviously vary depending on which way or how fast you want to go. Similarly, the amount of energy you consume getting from one place to another depends on the path taken such as walking around a hill instead of over the top. In thermodynamics, line or path integrals are very important and explain why some integrals are represented as the difference between starting and ending values while other integrals have to be evaluated explicitly.

Three things are needed to calculate a line integral:

The \(C\) subscript on the integral is the conventional notation to indicate a line integral, although, unfortunately, this is not usually used in thermodynamics. The integral \(\displaystyle \int(x + y)dx\) cannot be evaluated as it stands, because we do not yet know how \(y\) is related to \(x\) and integration is with respect to \(x\). The path taken determines the relationship between \(y\) and \(x\) and mathematically, this can take almost any form we choose. In practice, of course, the specific problem being studied will determine this relationship. Therefore integration of \(\displaystyle \int(x+y)dx\) could just as easily be over the path \(y=e^x\) from \(x=-2\to 2\) or \(y=\sin(3x)\) from \(0 \to \pi/2\) and so forth and consequently there is no limit to the number of examples that can be devised even with a single surface.

Figure 33 shows the path of a circle of radius 3 projected onto the surface \(P(x, y) = x^3y+xy^3+50\). The line integral is the curtain-like area between the lower circle \(C\) in the \(x-y\) plane and its projection hugging the surface. If this seems rather esoteric, consider instead a prosaic example of finding the weight of a piece of wire. This is path \(C\) (Figure 33). Now suppose that the wire has a weight that varies with its length and the weight changes as described by \(P(x, y)\). The total weight must be the integral along the length of the string each little element of which is accounted for in proportion to \(P\) by integrating. The weight at each point is the height of the line draped on \(P\) above the \(x-y\) plane as shown in Figure 33 and the whole weight is the area between curve \(C\) in the \(x-y\) plane and its projection on \(P\). 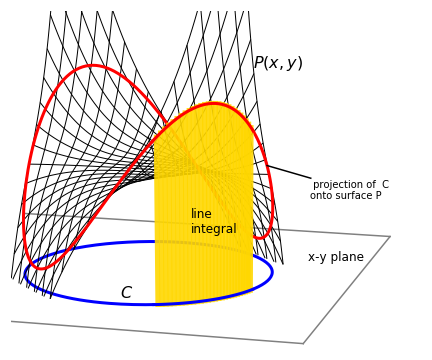 Returning to the original example, to calculate the integral is easier than it may seem. All that is necessary is to substitute \(y\) into the function \(P = x + y\) and integrate as normal. If the path \(C\) is \(y = x^2/2\) then

which does make the integral look rather ordinary.

13.1 Definitions of some different forms of line integrals#

A similar integral could be defined in terms of an integral in \(y\) instead of x; for example, if \(Q(x, y)\) is the line, then

but note that it is necessary to multiply by \(dy/dx\) and integrate in \(dx\).

Using Sympy to do the integral gives

Suppose that the length of a small section of the curve \(C\) is \(ds\) then a line integral can be defined in terms of this arc length. See the sketch, Fig. 4.35,

As an example, consider finding the length of the curve of the same parabola and limits as in Section 13.3. The integral is

If a curve is defined in plane polar coordinates, the arc length is

which after substituting for \(x\) and \(y\) becomes

The Archimedian spiral has the form \(r=a\theta\) where \(a\) is a constant. The length of this curve is

13.5 A surface defined by two functions#

Suppose that the surface is represented by two functions \(M\) and \(N\), which is often the case in thermodynamics, then the line integral can be written as two integrals in \(dx\) and \(dy\),

As an example, the integral

will be calculated over the upper half of the semicircle of a unit disc. The curve \(C\) is therefore the equation of a unit circle, \(x^2 + y^2 = 1\), and the integration proceeds from \((1, 0) \to (-1, 0)\), which is from the positive x-axis anticlockwise to the negative x-axis. The integral is, with the derivative in brackets,

which is the same result. Therefore, this integral is independent of the path provided both paths pass through the same end points.

There are clearly many other curves that pass through the points \((0, 0) \to (0, \pi/2)\) and all of these will return the same value of the integral.

The surface \(x + y\) would be called a state function if \(x\) and \(y\) had a meaning in thermodynamics. The value of a state function only depends on the starting and ending conditions and not on the means of getting from one to the other. The condition for the integral \(f = \int M(x, y)dx + N(x, y)dy\) to depend only on its end-points is

a relationship which has been met before in the discussion on partial derivatives; see Chapter 3.12.

Figure 36. The integral of a state function is independent of path and depends only on starting and ending positions \(A\) and \(B\).

In thermodynamics, all the integrals you are likely to meet are line functions in 8-dimensional space - not a very appealing thought. Thermodynamics can consequently appear to be so very complicated because the choice of variables is so very large. Normally, ‘natural’ variables are chosen depending upon which can easily be measured, usually these are \(p, V\) and \(T\). However, any two independent variables can be chosen from the eight state functions \(p, V, A, T, H, U, G, S\).

The first law, which is a law of the conservation of energy, states that the heat gained by a system \(q\) and the work done on the system \(w\), define the change in internal energy \(\Delta U\)% as

or in differential form

The \(\delta\) notation reminds us that \(q\) and \(w\) are not state functions but depend on the path. The integral therefore has to be performed as per normal and not obtained from the difference in starting and ending values, as is the case for a state function such as \(U\). The \(\delta\) notation also means that \(q\) and \(w\) are not perfect differentials and are calculated by path integrals. Other authors just use \(dU = dq + dw\) and leave it for you to decide which the perfect differentials are.

Recall that heat is energy in motion which means energy is being transported from one system to another and only occurs when there is a difference in temperature. Work means a gas is expanded with a volume change of \(\Delta V\) against an external pressure \(p\). Suppose the heat absorbed on expansion of a gas is taken to be a function of internal energy \(U\) that changes from \(U_0 \to U_1\) and volume \(V\) that changes from \(V_0 \to V_1\). Since \(U\) is a state function and work is not, integrating \(q =\displaystyle \int dq = \int dU - \int dw\) and replacing work with \(dw = -pdV\) gives

In a general thermodynamic system, it is unknown how the pressure depends on both the volume and internal energy, and how they vary along the path chosen. Therefore, the integral cannot be evaluated unless these relationships can be found. If the ideal gas law or van der Waals equation applies, then the relationship between \(p\) and \(V\) is known and the work integral can be calculated.

Suppose now that \(T\) and \(V\) are chosen as independent variables, instead of \(p\) and \(V\). By definition, the heat capacity is the gradient of the heat vs temperature and if constant volume applies it is called \(C_V\) where the heat is replaced by the internal energy as no work can be done, \(\displaystyle C_V=\left( \frac{\partial U}{\partial T} \right)_V \) then \(\displaystyle \int dU=\int C_V dT\) and the heat change \(\displaystyle q=\int dq=\int dU-\int dw\) becomes

This can be evaluated because the heat capacity and change of pressure with temperature and volume can be measured. Similarly, if \(p\) and \(V\) are the independent variables, then

The constant pressure heat capacity is defined as \(\displaystyle C_p=\left( \frac{\partial H}{\partial T} \right)_p \) where \(H=U+pV \) is the enthalpy, internal energy plus work. If an ideal gas expansion is carried out at constant pressure, then the first term in the integration is zero; and the second term is zero if carried out at constant volume; if neither is the case then the path equation must be known and \(dV/dp\) calculated to make the integral one in \(p\) or \(V\) alone.

As an example of a thermodynamic calculation, consider calculating the entropy \(S\), which is a state function and can be defined as

and in an integrated form

The heat capacity is by definition, \((dU/dT)_p\) making the left-hand side of equation 91

because the internal energy \(U\) of an ideal gas depends only on the temperature. The right-hand side of equation 91 is also zero because \(\displaystyle \frac{\partial }{\partial T}\left( \frac{R}{p}\right)=0\), verifying that \(S\) is a state function.

14.1 State functions do not depend on the path#

\(\quad\)(1) Substitute for any partial derivatives using (in this example) the ideal gas law to make an equation in \(p\) or \(T\) as necessary.

as illustrated in equation 85.

This is also obvious because \(T\) is constant along this part of path (a) and equation 92 could have been used directly. In the second step at constant \(p_1\) with the temperature changing from \(T_0 \to T_1\),

and the total change in entropy is the sum of these last two integrals.

The same method is used for path (b) along the line \(C_3\). As this path goes directly from start to finish it is the equation of a straight line;

A line integral of two functions is by Green’s theorem equal to the surface integral around a closed area, or

where integration is taken in an anticlockwise direction. It can be evaluated either as two or more line integrals, one for each part of the loop, or from the double integral depending which is easier, but is always around a closed area. The notation for this is often given as \(\int_C Mdx + Ndy\) . If the curve is given para metrically, the integral is \(\displaystyle A= \frac{1}{2}\int \left( x\frac{N}{dt}-y\frac{M}{dt} \right)dt\).

and note the change of order of integration in the second line which ensures that an integral in \(x\) with constants as limits is the final integration. The result is the same that obtained before.