Strategy: Energy is the integral of a force \(f\) over distance. At the classical turning point the molecule is instantaneously stationary, therefore the kinetic energy is zero and the total energy \(E\) is the same as the potential energy. The vibrational frequency is \(\displaystyle \nu = \frac{1}{2\pi} \sqrt{\frac{k}{\mu}} \mathrm{s}^{-1}\) if \(\mu\) is the reduced mass.

Strategy: You need to know that the Arrhenius equation is usually written as \(\displaystyle k = k_0e^{-E_a/RT}\). It is in this form in all the textbooks. Note that \(k\), the rate constant, more properly the rate coefficient, is a function of temperature and can therefore form the derivative \(dk/dT\) and that \(k_0\) is a constant and differentiates to zero.

The movement of a molecule of mass \(m\) in a viscous medium, such as its solvent, is subject to Newton’s equation: force equals mass \(\times\) acceleration, or

(a) Find the velocity at time \(t\) if \(v = v_0\) at \(t = 0\) and show that the constants are equivalent to a time \(\displaystyle \tau = \frac{m}{3\pi\delta\eta}\). This time is the time for the molecule to ‘lose its memory’ of its previous velocity and position and is therefore a measure of how rapidly its kinetic energy is dissipated into the solvent. (See Finkelstein & Ptitsyn (2002) page 100 for an interesting discussion relating to proteins).

Strategy: This is a standard integral, and can be looked up in the table or converted into its exponential form and then integrated. The result should be inspected at large \(L\).

The acceleration \(f\) of a particle is given by the vector equation,

Calculate its velocity and displacement (position) at time \(t\) if the particle is at rest at the origin at time zero. If you are not familiar with the vector notation you may want to look this up in Chapter 6.3.

In an ideal gas \(pV = nRT\). Show that for an isothermal change

Strategy: As the change is isothermal, \(T\) is constant. Substitute for \(p\) and integrate.

In an adiabatic process \(pV^\gamma = k\), where \(\gamma\) is the ratio of specific heat capacities \(C_p\) to \(C_V\) and is measured to be 1.404 for air, and \(k\) is a constant. In an adiabatic change no heat enters or leaves during the process, consequently the temperature must change. Also, by the first law, the work done must be equal to the change in internal energy \(U\) of the gas.

(b) Calculate the instantaneous temperature rise if the engine is initially at 300 K, assuming, somewhat unrealistically, that the cylinder itself does not absorb any heat. Assume also that the air is an ideal diatomic gas with heat capacity per mole \(C_V = 5R/2\).

You will need to use \(dU = C_V dT\) where \(U\) is the internal energy and know or look up the first law of thermodynamics.

Strategy: You are given the equation with which to calculate the work done. Note that the engine compresses the gas, so the final volume is less than that of the initial, hence the upper limit of the integration must be smaller than the lower. The lower limit is always taken to be the initial value, \(V\). Because the compression is adiabatic, you must use the equation given, \(pV^\gamma = k\), rather than the ideal gas law. It is easier to do the calculation algebraically first and evaluate \(k\) afterwards using the values in the question. In the second part, calculate the work as the increase in internal energy from an initial to final temperature and knowing the work from part (a), find the final temperature.

in which \(a\) and \(b\) are constants characteristic of the gas but independent of temperature.

(b) Calculate the change in enthalpy and entropy between 298 and 350 K.

The Clapeyron equation describes the relationship between temperature and pressure of a vapour.

between temperatures \(T_1\) and \(T_2\). Using this equation, knowing the pressure at one temperature, the pressure can be found at any other. This is illustrated in the next problem.

At the triple point

The coexistence curves are described by the Clapeyron and Clausius-Clapeyron equations calculated in the previous problem. The phase diagram will show regions containing solid, vapour, and liquid separated by the lines you calculate. To obtain a phase diagram similar to that in your textbook, plot three lines on the same graph but starting and ending at different temperatures each one containing the common value that is the triple point.

Strategy: Look up a typical gas-liquid-solid phase diagram in your textbook to see what your calculation should look like. Use the equations derived in the previous question. Note that the enthalpy of sublimation is that due to fusion plus that for vaporization. The common point is the triple point therefore the fusion curve ends at this point and the melting and vaporization curves start there. One atmosphere equals 760 torr which is 101326 Pa, therefore 1 torr equals 101326/760 Pa. You may find it easier to plot the log of the pressure.

A tube that is pinched in the middle and used to accelerate the gases in a steam turbine, jet aircraft, or rocket engine, is called a de-Laval or convergent-divergent (‘condi’) nozzle. In physical science, it is also used as a means of cooling a jet of gas molecules down to a few degrees Kelvin when gas from high pressure is expanded into a vacuum. The profile of a de-Laval nozzle is shown in the sketch, Figure 7. 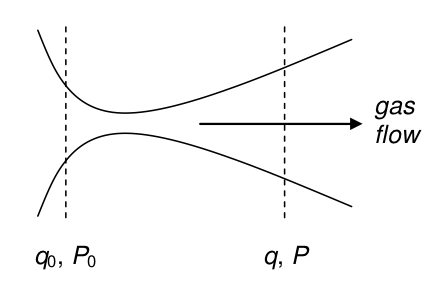 Figure 7. Sketch of the shape of the de-Laval or condi nozzle.

The fuel and air heated in a jet engine increases in velocity as it passes through the engine and by reaction on the turbine blades provides the thrust to drive the plane, boat, or train forward. The rocket engine similarly has the shape of a de-Laval nozzle whose profile decreases then increases along its length. In any turbine or rocket engine the gas is heated so quickly that this is done adiabatically (and therefore \(pV^\gamma = C\), where \(C\) is a constant) and also isentropically because the gas experiences no change in entropy. Because there is no heat loss, \(\delta q = 0\), consequently the entropy change is also zero because, under reversible conditions, \(\delta q_{rev} = TdS\). The enthalpy change (kJ/mole) from the front of the engine \(q_0\) to a value \(q\), at some point along the path, is equal to the change in kinetic energy of the gas which is moving at a speed \(u\) at that point, therefore for \(m\) g/mole of gas,

(a) By integrating the relationship

then calculate the gas velocity.

Using the relationship \(pV^\gamma = p_0V_0^\gamma\) rearrange this to an expression for \(V\), then obtain the jet cross section and find its minimum area that is at the throttle point.

Plot the nozzle cross section as a function of the ratio of pressure to input pressure, \(p/p_0\), and hence determine the shape of the gas profile in the jet and therefore by inference the internal profile of the engine. This should look something like that in the sketch fig 7.

(c) Show that the speed of the gas at the throttle point is that of sound;

Strategy: The fact that the entropy is constant allows \(\displaystyle \left( \frac{\partial q}{\partial p} \right)_S=V\) to be integrated but otherwise does not enter into the calculation. The expression for \(q\) is first separated by writing \(dq =\cdots\) then integrated with limits \(q,\, q_0\) and \(p, \,p_0\). The velocity is obtained via the kinetic energy expression and the cross section via the mass flow equation.