(b) Algorithm 5 needs slight modification. The rate constants are different and the timescale needs to be changed to \(100\) ns, which is a guess, and may need to be changed later on. Because there are two reacting species, the excited state and the triplet, a check has to be made to make sure that the numbers in any of the states do not go below zero. Try the simulation with A0 = \(1000\) initial molecules in nA and increase these numbers as necessary. Eventually, the number of triplet states becomes zero and the calculation must end when this occurs because there are no more molecules left to react. At this point, the number in the ground state is equal to the initial number, and this is checked for in the ‘while nG \(\lt\) A0 do:’ step at the beginning of the loop. 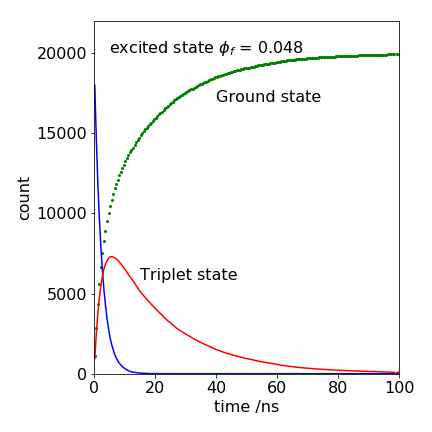 Figure 31. A Monte Carlo calculation of the decay of an excited state and the rise and decay of a triplet state, together with the increase of the ground state’s population. The parameters used are listed below.

Modify the code for question 7. After setting the initial values inside the loop, the following changes can be made to account for the filling of state \(T\). The value of \(k_{isc}\) as it changes, is now called knT.

The last statement \(\mathtt{phif = kf/k1}\) , is necessary inside the loop since this value changes as time proceeds. There are always two decisions to make; one calculates the time and the other which reaction will occur based on \(\mathtt{phif}\). At long times when the state T is full, the yield \(\varphi\) becomes unity because the state A can only convert to state G. If \(k_f\) is the fluorescence rate constant, then \(\varphi\) is the fluorescence yield, which is the same as the yield for ground state formation. The calculation should continue as long as nA does not become zero, and to ensure this, make its initial value equal to the number of events. The result of one simulation is shown below in Fig. 23. 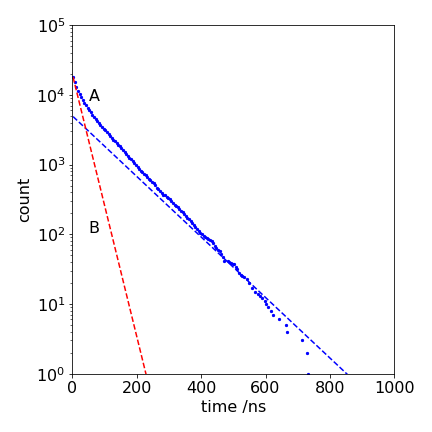 The following modification to the Gillespie algorithm could be used. The whole calculation will need to be repeated, say, 100 times and the results averaged. This is because of the small number of individuals who could catch the disease and hence only a small number of trials are possible.

The average of the profiles calculated follows the expected pattern, although each time the calculation is done, it is a little different because of its random nature. The infected numbers rise and then fall; those susceptible to infection fall as they become infected and then immune, and enter the R or removed group. 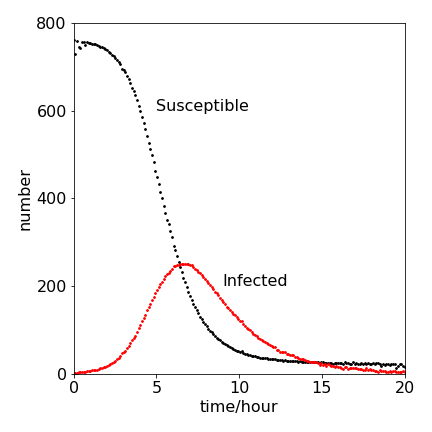 Modifying algorithm in the text produces the following:

Plotting the data, the populations oscillate as expected; one species grows at the expense of the other, which then almost dies off and then vice versa. See Chapter 11.7 for a fuller description. The fact that a Monte Carlo integration method is used means that the data is far more erratic than using an Euler integration method, just as might be expected because of random choices made as the calculation proceeds. Many more events would have to be taken to improve the result and to make it closer to a direct integration method. However, perhaps the result represents more closely what might happen in nature to two populations where there is only a limited number of individuals. 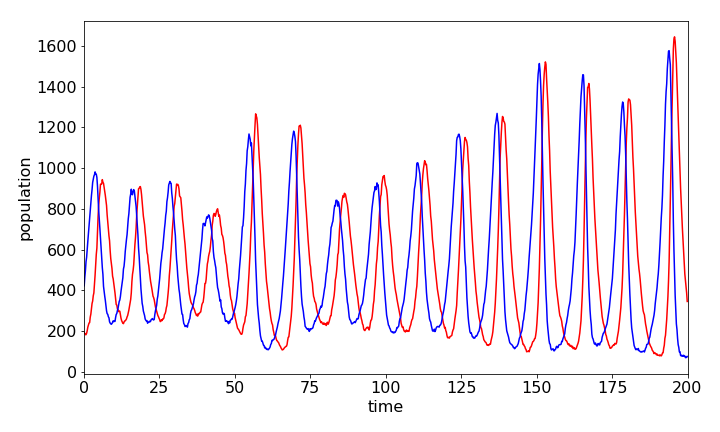