Product rule and function of function or chain rule.

Product rule and function of function or chain rule.#

Many equations have the form where a power of \(x\) is multiplied by another, or by an exponential, a sine or cosine and so forth, and you must be able to handle these more complicated equations because they occur so frequently. A couple of simple rules allow us to do this quite easily.

\(\qquad\qquad\) differentiate the main or ‘outside function’,

\(\qquad\qquad\) then multiply this by the differential of the inside function.

This simple but powerful method is most easily explained by examples; (i) to (iv) below are typical. The general formula is given in the next section. To differentiate the functions, use the table or various sections above to remind you of the rules.

(i) To differentiate \(\displaystyle y=\sin(ax^2+x^{-3})\) treat the sine as the outside function, differentiate it to produce \(\cos(\cdots)\), then multiply by the differential of the terms inside the sine bracket

differentiating the outside first, then the inside

which can be checked using the result for logs.

because \(dy/dx\) is the derivative of \(y\). The result of differentiating both sides is therefore

and \(y\) can be substituted into this result to obtain the equation in \(x\) alone.

which should be the same result as was obtained by using the first method but substitution and rearranging is necessary to show this.

4.2 Function of a function general formula#

Differentiation is performed by letting \(u = g(h)\) giving

In thermodynamics, derivatives often seem to appear out of nowhere. For instance,

and these are examples of the chain rule used in a way that you may feel is back to front. The left-hand side is expanded to give the right, rather than starting with an explicit function, of say, \(S\) in terms of \(T\) and \(p\). The functional form does exist but it is not needed for us to be able to write down the expression; the fact that it exists is enough for further calculations. The reason for using this approach is that the change of entropy \(S\) with pressure can be converted into a measurement of entropy with temperature, and a measurement of the change of temperature with pressure. The entropy change with temperature can be accurately measured with an electrochemical cell.

When there are products or ratios of functions, differentiation is done in two steps;

The general form of the product rule is:

and multiplying out gives equation 18.

Naturally the second derivative can be obtained by repeating the process:

which, if simplified, becomes

where the brackets and \(x\) are suppressed for clarity. For example using eqn. (20)

4.6 Differentiation with respect to a function#

where \(\Delta H\) is enthalpy and \(T\) temperature. The curly \(\partial\) indicates a partial derivative, which means only that \(\Delta G\), depends on something other than \(T\) alone, which here is \(p\), but is otherwise just the same as any other derivative. The \(p\) subscript indicates constant pressure, but we will drop this now for clarity. To calculate \(d(\Delta G/T)/dT\): the function-of- function method of eqn. 20 is used knowing that \(\Delta G\) is a function of \(T\),

Next the remaining derivative is substituted in,

A second commonly met equation is the van’t Hoff isotherm

Quite often, an equation we may want to differentiate contains powers or functions of \(y\) as well as \(x\). For example, \(\displaystyle \sin(y) + x^2e^x = 1\), and cannot easily be put into the form \(y = \cdots\). In this case implicit differentiation is necessary, which is just a grand sounding name for a rather simple procedure and one with which you are already familiar. All that is done is to differentiate any function of \(y\) using the function-of-function or product rule or both, as appropriate, and remembering that the differential of \(y\) is \(dy/dx\).

An apparently hard differentiation is to find \(dy/dx\) for \(\displaystyle y^y-x^x=0\). This is however made easier if logs are taken first then differentiated implicitly. Thus differentiate \(y\ln(y)=x\ln(x)\) leading to

which can be simplified to

4.8 Parametric functions and their differentiation#

Sometimes it is easier to describe equations in parametric form as two functions with a common or dummy variable, rather than in the conventional way; there is no fundamental reason for doing so, just convenience. An example is the equation of a circle. If it has a radius \(a\) and is centred at the origin,

In parametric form, this same equation becomes the pair of equations;

Therefore, \(dy/dx\) is always the ratio of the two derivatives with respect to \(t\), the parametric variable.

As a check we can use SymPy.

Consider finding the gradient of the elegant looking curve shown in Fig. 6 at a point such as \(x\) = 2, and then find the equation of the tangent line at this point and where the tangent is horizontal and where vertical. The curve is described by the parametric equations

The gradient from equation (23) is

Figure 6. Left. The parametic curve and tangent at \(x\) = 2. Right: The same function on a larger scale showing the oscillatory nature of the curve.

As an example consider finding the parametric equations of an epicycloid. This is the curve formed when one disc rotates about another, such as two coins. In the (false) models of the solar system, such as proposed by Ptolemy, epicycloids were used to describe the motion of the planets. Initially these worked quite well but as time passes such models, based as they were on incorrect physics, became increasingly inaccurate. If the epicycloid curve produced has one cusp it is called a cardioid due to its heart-like shape, those with two cusps are called nephroids after the shape of a kidney. Figure 6a shows two epicycloids, the number of cusps corresponds to the ratio of radii. 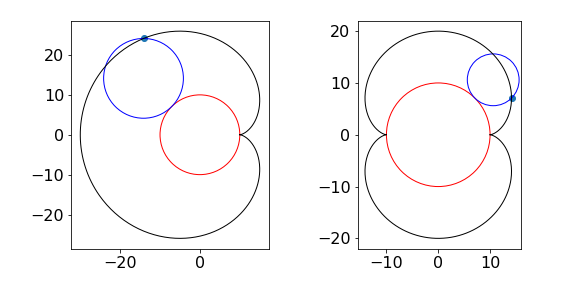 Figure 6a. Epicycloids. Left The cardioid is the black curve (radio of radii is 1) and right Nephroid (black ) with ratio 2.

Assuming that the fixed circle is centred at the origin of the coordinates (fig. 6b), the parameter \(t\) used in the parametric equations is the angle from the x-axis to the centre of the rolling circle as shown in figure 6b. The aim is to represent the point D in terms of the angle \(t\) and the radii of the two circles \(r_a\;r_b\).

Finally, if there are two similar coins and if one rotates (without slipping) half way round the other what direction will it now point compared to that initially? The answer is that it will point in the same direction as that when it started. The distance travelled is \(\pi r_a\) which is a rotation by 180o but there is also the rotation added by the fixed coin making \(360^\text{o}\) in total. 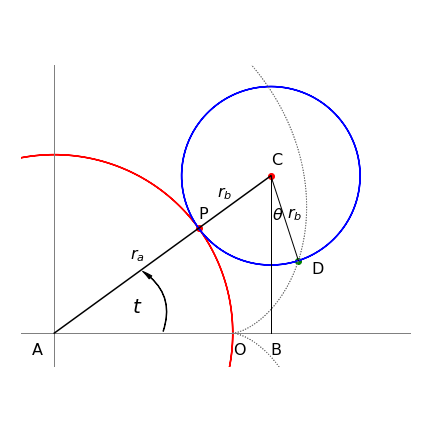 Figure 6b. Calculation of parametric equation for an epicycle.

To differentiate any vector, each of its elements is treated separately. In the previous section, we saw how to represent a curve in parametric form. The two parametric equations can also be represented in vector form; for example, a parabola is represented by the equation \(y^2 = 4ax\), but in parametric form this can be written as \(\displaystyle x = at^2\) and \(y = 2at\) and in row vector form as \(\displaystyle t = [x y] \equiv [at^2 2at]\). Since all elements are treated separately,

Similarly for the cross product

Differentiating vectors is described in more detail in Section 13.

Function of a Function or Chain Rule#