The characteristic polynomial is the polynomial resulting from expansion of the determinant and made equal to zero,

Factoring produces \((x-b)\left[ x(x+b)-a(a+b) \right]=0\) with the solution \(x=b\). The other solutions are found from the quadratic in square brackets. This produces \(x=-b -a\) and \(x=a\). Using Sympy is easy also, after factoring the solve step is really not necessary.

(a) As it is small construct the matrix directly and calculate the determinant as in the examples, section 2.5. The first calculation is a numerical evaluation using the numpy linear algebra package. The second used algebraic solution using SymPy. The numerical value is effectively zero being so small.

This is a numerical answer, as opposed to an algebraic one, meaning that an numerical algorithm was used to evaluate it. The answer is sufficiently small to assume that it is zero.

The prime numbers have to be found first. The first prime is \(2\). The \(\mathtt{def\; isprime(n)}\) checks only as far as the square root since, if it has a larger factor, it also has a smaller one.

Starting with the matrix, using the method of Algorithm 1 with \(n = 6\), modify the matrix to connect atom \(2\) atom \(6\) as in the structure; the atoms \(2\) and \(3\) 3 are connected already because adjacent atoms always connect in the numbering scheme. Adding the following line, as was done in the previous problem, links atoms \(2\) and \(6\),

The solution contains complex numbers, which is quite a surprise as the energies must always be real; perhaps there is a mistake? However, in this example this is a limitation of the numerical method used to solve the determinant. Notice how small the values of the imaginary part of the complex numbers are (the part containing \(j\)), they are all \(\lt 10^{-20}\) and so insignificant compared to the real part and can safely be ignored. To convince you of this plot the characteristic equation; the six roots are clearly real numbers, Fig. 75, and are the solutions to \(x+1=0,x^2 -x-1=0\) and \(x^3 -4x+1=0\). 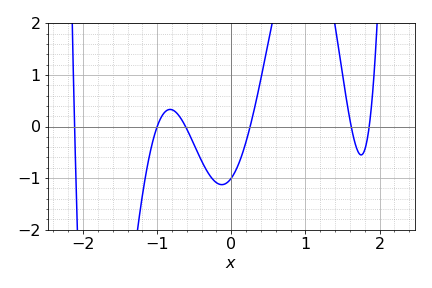 In its triangular form the Huckel determinant and characteristic equation is

Solving this equation produces \(x = 1, 1, -2\), with energies \(E = \alpha + \beta\), twice and \(E = \alpha - 2\beta\). The total energy of the three electrons is therefore \(3\alpha + 3\beta\) making the stabilization energy \(3\beta\). As this is slightly larger than \(2\sqrt{2}\beta\) the triangular form is expected to be the most stable. In the real molecule, the energy between the linear and triangular form is quite small and the triangular form is distorted by Jahn-Teller interaction and is not an isosceles triangle but an obtuse one. The linear structure was calculated by an ab initio method to be approximately \(13\) kJ mol\(^{-1}\) higher in energy than the triangular one (Martin & Davidson 1988).

(c) If atoms two and three are to be moved apart around a circle so that the \(1\to 2\) and \(1\to 3\) bond lengths are constant, then the Huckel determinant is

Figure 76. Left. The energy of Na\(_3\) as a function of bond angle assuming a simple exponential model of orbital overlap, and that the bond lengths remain constant as the angle increases, (right).

and for propene with three carbons

The Huckel energies for any linear polyene can now be calculated, provided the polynomial equations can be solved! If they cannot, you can always draw graphs to find the roots of the equations, and use the Newton-Raphson method, not that elegant, but does give good numerical values.

(b) Calculating the recursion in Python/Sympy is very easy also.

Numerically solving the equations rather than factoring as above, and plotting the results, shows how the energy levels change as the number of carbon atoms and hence \(\pi\) electrons increases. As the number of levels increase more energy levels (states), appear to have large positive and negative values and fewer at zero energy. When the number of electrons becomes very large, as in a semiconductor, the levels merge into a band and then relatively more energy levels appear at the band edges than at the band centre. This is the trend that is seen to be starting here. All the levels below zero are filled and as the molecule gets longer the energy gap between HOMO and LUMO orbitals becomes very small, rather line this of a 1D metal. 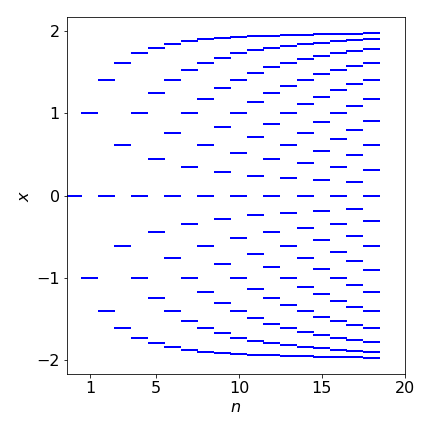 Figure 77. Plot of variable \(x\), which is proportional to energy vs. the number of carbon atoms in a linear polyene, \(E = \alpha-\beta x\)