Many functions contain two or more variables; for instance, the distance of the electron in a hydrogen atom depends on its x, y, and z-position from the nucleus. Any point on a plane is given by its x- and y-coordinates or on the earth by its latitude and longitude. To evaluate a double or triple integral, each integral is performed with the same rules as a single integral but care must be taken to sort out the integration limits. The use of multiple integrals quite often involves transforming variables, from Cartesian \(x, y, z\) to different forms of polar or cylindrical coordinates depending on the problem. The only reason for doing this is to simplify the integration and the only difficulty is unfamiliarity with the new coordinates. 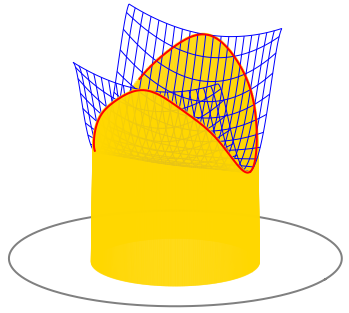 Figure 22. A double integral pictured as the volume between a surface, shown as a blue mesh, and the \(x-y\) plane, shown as a circle.

The volume produced is like a rectangular rod with a flat base but a top cut to the shape of the function. The next integral is easily evaluated as two separate ones because the integration limits are constants and the terms can be separated. Note how the integral signs and the variables are written - inside to inside and first to last:

In quantum mechanics, double and triple integrals often have the form where one coordinate’s function is unity and integration is made over some range of angles; \(\varphi\) ranges from \(0 \to \pi\) in the following integral 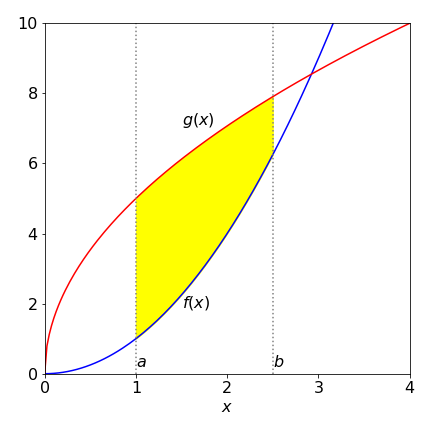 Figure 23. Limits to the double integral in the \(x-y\) plane. The integral is th volume above the shaded area and towards the reader and extends to the function \(f(x,y)\).

More interesting is the case when the double integral is bounded in the plane by variable limits. As shown in figure 23, \(x\) has limits \(a \to b\) but \(y\) has limits which are the functions \(g\) and \(h\), which both depend on \(x\). As the \(y\) limits are not constant the integral is written as

The double integral is useful in obtaining the mean value, centroids and moments of inertia of functions and is an alternative way to that described in Section 8.2. In these equations the order of integration is not necessarily implied by the way in which they are written. The integration order is unimportant if the integration limits are constants but is if they depend on x then the y integral must be done first as in equation 51.

is a volume of unit thickness. The result \(A\) is also called a lamina, which is a sheet of unit but uniform thickness.

The x-centroid, the average position of the x-coordinate of the function is

If the density is not constant but is described by a function \(f(x, y)\) then the formulae are changed to;

which is essentially equation 28. The position of the centroids is often called the centre of gravity of the object.

By definition, the moment of inertia of an object about an axis is the product of the distance squared from the axis times the mass; \(I = mL^2\). If the body is extended, then the integration must be performed over the entire shape. Should the mass is distributed as \(f (x, y)\) then the x-direction moment of inertia depends on the distance from the y-axis and is

If the mass is uniform then the function f is a constant and can be taken outside the integration.

These various calculations are now illustrated. To calculate the lamina’s area using equation 52 the limits have to be defined. In Figure 24 the closed area is that bounded by \(g = x^2\) and \(h = 2 - x^2\) from \(x = -1 \to 1\) and these will determine the integration limits. Notice that the \(y\) integral is performed first which produces a result in \(x\) that is then integrated. The area is calculated as

as would be expected for this symmetrical shape. 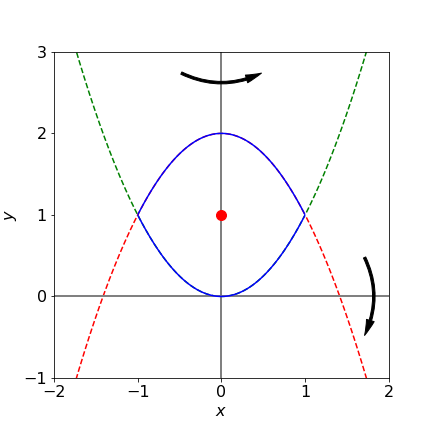 The moment of inertia about the x-axis is greater (by approximately \(6\) times) than that about \(y\) because the rotation about \(x\) involves the whole body rotating around this axis whereas the body is symmetrically disposed about the y-axis and therefore the moment of inertia is smaller. The moments of inertia of molecules are described in Chapter 7.15.

Triple integrals are calculated in a similar way to double ones, but instead of producing a volume a density function is produced. This might literally be density if the mass/unit volume of a solid is known, but generally, density is taken to mean the amount of ‘stuff’ in a given volume such as electron density or probability of being at a certain position in an atomic orbital.

One commonly met triple integral is the normalization of a wavefunction \(\psi(r, \theta, \phi)\); when integrated over all space the product \(\psi^* \psi\) must be unity. This means that

where the superscript * indicates a complex conjugate. The \(r^2\sin(\theta)drd\theta d\phi\) term comes from converting the volume element \(dxdydz\) in Cartesian to spherical polar coordinates; see Section 11 where the calculation of this conversion is described. The limits are almost invariably the same for quantum problems. The polar angle \(\theta\) ranges from north to south and can only have values from \(0 \to \pi\). The azimuthal (equatorial) angle \(\phi\) moves around the equator so ranges from \(0 \to 2\pi\).

where the second \(r^2\) comes from the volume element, eqn 56. This integral has a standard form, (two terms of the type \(x^ne^{-ax}\)) which can be integrated by parts; see (2.13). Using Sympy, because the calculation while straightforward is involved, gives for the radial part equation 58

The angular part of the integral

are simplified by separating the \(\theta\) and \(\phi\) integrals into two then evaluating the complex conjugate first, because \(e^{-i\phi}e^{i\phi} = 1\). The remaining integral is

and the sine integral was worked out by converting to the exponential form. Multiplying the two results and rearranging gives the normalization as \(\displaystyle N=\frac{1}{81\sqrt{\pi}}\sqrt{\frac{1}{a_0^3}}\)

11 Change of variables in integrals: Jacobians#

In Section 3 the method of simplifying an integration by a change of variable was described. A commonly used change of variables in multiple integrals is from Cartesian either to plane polar or spherical polar coordinates. The (plane) polar coordinates are two dimensional and spherical polar are three dimensional; see Chapter 1.6.1. They are used only to simplify a calculation by using those coordinates that reflect the underlying symmetry of the problem being studied, thus the shapes of the s, p, d and other atomic wavefunctions (orbitals) are naturally described in terms of three-dimensional spherical polar coordinates with a radius \(r\), a polar \(\theta\), and an equatorial (azimuthal) angle \(\phi\). However, many two or three or higher dimensional integrations can be simplified by a suitable algebraic substitution, which may also be thought of as a change of coordinates. Fortunately, there is a systematic way of doing this using a determinant of derivatives, called the Jacobian and these are described in this section. Determinants are described in Chapter 7.

A one-dimensional example is considered first. An apparently hard integral such as \(\displaystyle \int_0^b x\sqrt{ a^2 -x^2} dx\) can be simplified by substituting \(u = a^2 - x^2\), calculating the differential \(du=-2xdx\) and changing the limits. The result is

Ignoring the limits for clarity, a general integral of a function \(f(x)\) and its substitution can be written as

where \(f\) is some normal function of \(x\) and \(y\), perhaps \(\sin(y)/\sin(x)\) and \(u\) and \(v\) are functions of \(x\) and \(y\). What these are depends on the particular calculation. In three dimensions, the general equation for the transformation is similar but rather formidable, 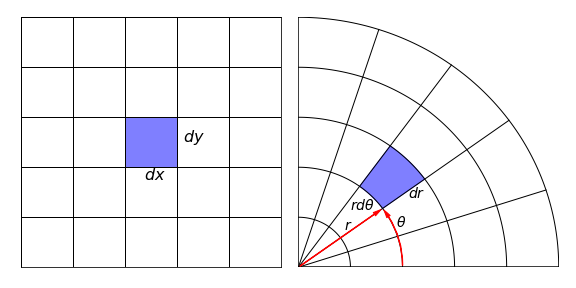 Figure 25. An area in \(dxdy\) and morphed to an equal value \(rdrd\theta\) in Cartesian and plane polar coordinates. Infinitesimal lengths \(dx\) etc. are greatly exaggerated relative to the axes. \(\theta\) is the angle formed by moving anticlockwise from zero degrees starting at the horizontal line.

The change of coordinates means that the volume \(dxdydz\) has to be distorted or morphed into an equivalent volume in the new coordinates \(drd\theta d\phi\). Therefore the new function, the Jacobian \(J(x, y, z, r, \theta, \phi)\), has to be found.

Any coordinate change or substitution has three parts

(a) Calculating the Jacobian,

(b) Substituting the new variables into the function \(f\),

(c) Changing any limits on the integration to the new coordinates.

These are best illustrated with examples. A point (\(x, y, z\)) is equivalently (\(r, \theta, \varphi\)) in spherical polar coordinates, the connection between the two sets of coordinates is described by geometry and is

In the case of the polar coordinates the area is relatively easily calculated. The circumference of a circle is \(2\pi r\), which is the radius times the angle rotated which is \(2\pi\) radians. The length of the arc for a small angle is therefore \(rd\theta\) for angular change \(d\theta\). The radius extends from \(r \to r + dr\) making the area \(rdrd\theta\). For other coordinates, the geometrical calculation is complex and an algebraic method is therefore preferred. This method, presented without proof, is to form the Jacobian, which is the determinant of the derivatives of the equation converting one set coordinates into the other.

Consider now the spherical polar coordinates, the function \(J(x, y, z, r, \theta, \varphi)\) is needed and changing to the conventional notation this is the determinant of the partial derivatives of \(x, y, z\) with \(r, \theta, \varphi\) and is defined as

Notice the ordering; the old coordinates \(x, y, z\) are on the top of each differentiation. Note also the notation in the brackets with \(J\). Using equation 59 the determinant is

The volume element conversion is then written as

In some cases, the determinant may produce a negative answer depending on the order of calculating the derivatives; however, the Jacobian represents an area or volume element so the positive result may legitimately be taken in such cases.

A few examples are now worked through.

(i) A coordinate change may simplify#

A coordinate change will simplify the integral

The first two steps in the calculation are necessary because no limits are given. In step (a) the Jacobian is calculated and is

Step (b) is substituting into the function to find \(F(u, v)\) and this produces

and multiplying this with the Jacobian makes the integral rather simple:

The following integral will be solved by transforming to polar coordinates

Substituting into the integral gives

which can be separated into integrals in \(r\) and \(\theta\), since there is no term in both variables, and the limits of the integration are constants. The integrals are standard ones, see Section 2.13. Using Sympy gives \(\displaystyle I=\frac{1}{8}\left( \frac{\pi}{2}-1 \right)\). The calculation is shown below without limits. 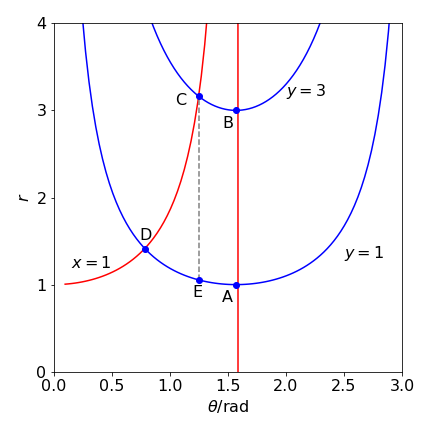 can be solved by converting to polar coordinates first then changing the integration limits. Converting produces