Suppose a wavefunction \(R\) represents the radial part of the ground state of a hydrogen atom then a continuous basis set is needed because the wavefunction depends on spatial coordinates, and in particular on the radial distance from the nucleus, \(r\). At this point, \(R\) is just the idea of the wavefunction as no basis or representation has yet been determined. The wavefunction can now be defined by left multiplying with a bra; the result is the value of the function at \(r\),

and the terms are the polynomials. The corresponding ket is

At this point, however, it becomes unnecessary and rather complicated to continue with the bra-ket form and it is simpler to revert to normal functions but still holding onto the idea of basis sets. The basis set could comprise almost any set of functions provided that they can be made orthogonal over the range of values needed, alternatively the known orthogonal polynomials, Legendre, Hermite, Chebychev, etc. could be used. A function \(f(x)\) can be expanded as a linear combination of orthogonal functions and if these from a set of wavefunctions \(\psi\) then

with coefficients \(c_n\). The wavefunction need not be specified yet, but whatever it is it must be orthogonal given different quantum numbers. This is exactly what is done in the general Fourier series described in Chapter 9. There it is shown that the coefficients are

If the function \(f\) is represented as the ket \(| f\rangle\), suppose that left multiplying by the bra \(\langle n |\) will extract the coefficient \(c_n\) in the same manner as for a discrete basis set. However, in a continuous basis the bra-ket represents an integral, thus \(\langle n | f\rangle \equiv \int \psi_n(x)f(x)dx\) . Equation (34) provides a method of calculating the coefficients of the expansion provided \(f\) has the same range as the wavefunction. To illustrate this, particle in a box wavefunctions are used to form the target function

The code below takes no account of the fact that the integral with \(n=0,2,4\cdots\) is zero because of the property of the sine so that very few terms produce a quite good approximation. 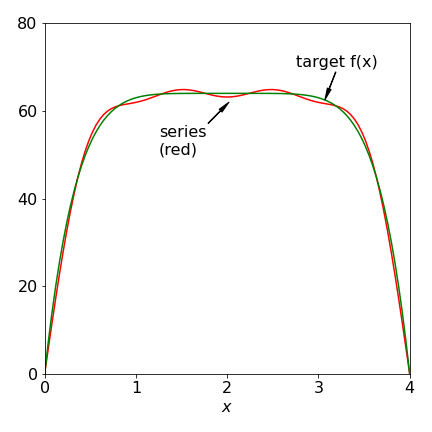 Why this method works can be appreciated by realizing that at larger values of \(n\) the sine function oscillates more rapidly and so allows for the rapid rising and falling part of the curves. The coefficients automatically adjust the proportion of each sine wave to describe the target equation. Other target functions can be tried quite easily by, changing \(f\), however, the less the function looks like a sine wave, such as \(\exp(-x)\), the greater will be the number of terms that are needed to produce a good description of the function, \(\gt 100\) in that case.