The following code could be used. 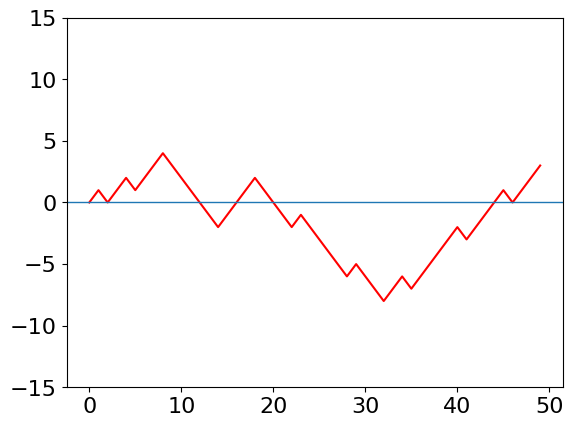 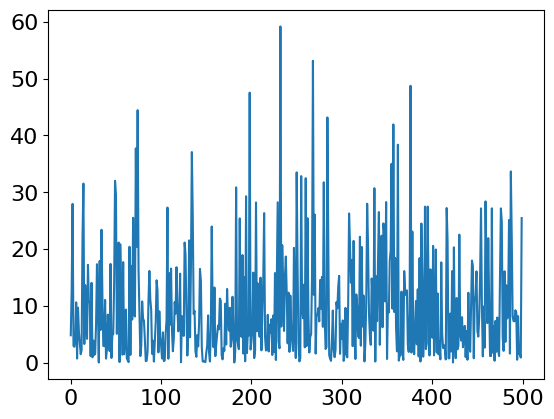 The plot of event number i vs times should look similar to Fig. 11 (left), but will be different in detail because of the random nature of the events. Notice how much the time that the molecule remains in the excited state varies; these times are Poisson distributed and when a histogram is made an exponential decay with a \(10\) ns decay lifetime results.

As an exercise, make these into a histogram to convince you of this and a plot similar to Figure 11 (right) should result.

(a) The first step is to work out a numbering scheme for the position of the bases and then to select from a uniformly distributed random number, four possibilities to represent them. One such scheme is shown in the question. Because only G bases are important, only one check needs to be made. For example, if a random number ranges from \(0 \to 4\), if it is greater than \(3\), then this can be the G base. Eleven bases are then chosen at random, and placed in a list; the list is given the value \(1\) if the base is G, otherwise it contains zero. The sixth base, which is in the middle, is made into the dye. The position of a G in the list is converted into the distance from the dye, (in position 6), and the rate constant calculated using the equation for \(k\). The absolute value of the distance from position 6 is calculated because the transfer distance must always be positive. The whole process is repeated, until you are satisfied that the average value of \(k\) is sufficiently accurate, say to 1 decimal place. The time is calculated using equation 13. 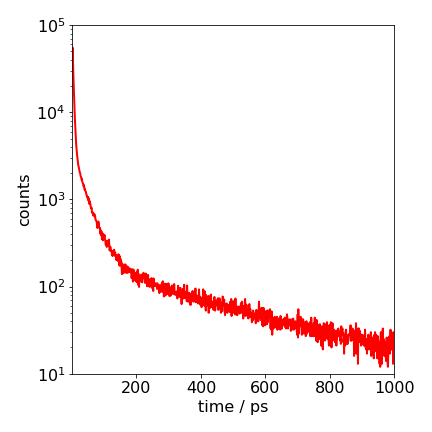 The calculation shows that the decay is initially very fast; only \(\approx 2\) ps and then slows dramatically as the more distant G bases quench. The very rapid decrease of the quenching rate constant with distance and the spatial dependence of the quenchers, as with donor - acceptor energy or electron transfer in solution, causes the non - exponential decay.

The results of a sample calculation are shown in Figure 27 where the infection rises rapidly and then ends as more people become immune. If no one became immune after having the illness, every one would be infected except those initially immune and the infected curve would rise to a constant value. Reducing the chance of recovery makes the illness persist with a long tail; increasing the chance of recovery, makes the curve more symmetrical. The number of people who are susceptible falls because, after becoming ill, they are now immune so enter the removed class. The number in the removed class is not shown, as it is the total number present less those susceptible and infected. The limited nature of the disease’s propagation is due to the reduction in the number of susceptible persons, not the number infected. In the outbreak almost everyone eventually becomes infected; typically \(980\) out of \(1000\).

Exercise: Repeat the calculation with different fractions of initially immune persons. What do you conclude about immunising populations against disease? Estimate what fraction of people needs to be immunised to prevent widespread disease. 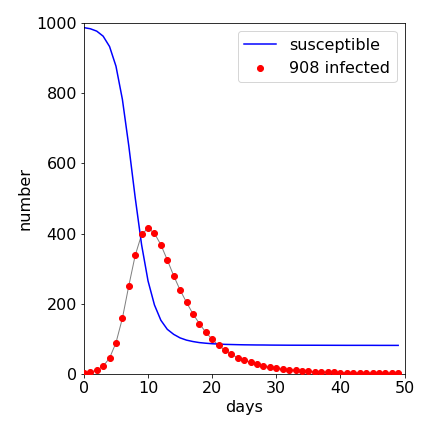 Figure 36. Result of Monte-Carlo simulation of S-I-R disease spread. There were \(1000\) persons, only one of whom was initially infected and \(1\)% were immune to the disease. Almost everyone else catches the disease, \(810\) entering the removed class out of \(1000\) individuals.