the series is then

Using symbolic algebra, as shown below we can confirm the calculation. The ‘big O’ notation means that the series was terminated before the \(x^6\) term.

The average is found by using eqn. 6, \(\displaystyle \langle x \rangle= \sum xp(x)/\sum p(x)\) the quantity \(x\) is the mass and \(p\) the fraction of the isotope present. Because the fractions add to unity, only the numerator need be evaluated. The final number is rounded to 6 decimal places, the same as each value.

The std deviation, \(\sqrt{\langle x \rangle-\langle x^2\rangle}\), is large because the wide range of masses and their fractions. The data is not the result measuring the same thing many times, which is necessary in a statistical measurement, but the average of disparate things, in this case the different isotopes. The precision of the individual masses reflects the effect of many measurements. The std deviation should be rounded to \(0.9\) making the average \(207.2 \pm 0.9\). However, it would be acceptable to give the answer as \(207 \pm 1\) to err on the cautious side and considering that the percentage abundance is only known to three figures.

A die has six sides and the chance of it falling on any side is equal, if it is a fair die. The average of the numbers produced is then the sum,

The average value of many throws is made by adding up the entries in the matrix and dividing by \(n^2\). If \(i\) and \(j\) are row and index then the formula is

as expected the average is twice that for a single die, but the standard deviation is only \( \sqrt{2}\) bigger not double.

(b) In the harmonic oscillator, separate out the constant term (\(\displaystyle e^{-h\nu/2k_BT}\) ) in the summation as follows

The direct calculation of the relative population starts from equation (12), which is modified so as to use \(\theta\). Notice that to obtain the frequency in wavenumbers (\(\mathrm{cm^{-1}}\)), \(h\) is multiplied by \(c\).

(a) The probability distribution for energy \(E_n\) is that of Boltzmann’s distribution \(\displaystyle e^{-E_n/k_BT}\). The average number of photons \(n\) with total energy \(nh\nu\) is therefore

This does not look very encouraging at first, but with a bit of cunning this can be rewritten in another form by removing a constant term \(e^{h\nu/k_BT}\) from the summation. The result is

where the last part involves a little re-arranging. Notice that \(\langle n \rangle\) is zero when \(T \to 0\) as expected and tends to infinity when \(T\) is large and this is because there is no limit to the number of quanta.

Do these numbers make sense? Remember that in \(\mathrm{N_2}\) only one level is significantly populated, see the previous question, and the harmonic oscillator has an infinite number of levels, therefore the average is almost zero. In \(\mathrm{I_2}\), many more levels are populated and although the average is much larger, it is still not very large.

Repeating the calculation with an anharmonic oscillator, you might expect that the average will be larger as there are now only a finite number of energy levels before dissociation occurs, and they become closer together as the energy increases. However, at room temperature so few levels are populated, even in \(\mathrm{I_2}\), and the anharmonicity has only a small effect on the lower energy levels that this makes effectively no difference to \(\langle n \rangle\). Typically, temperatures \(\gt 2000\) K are needed to make more than about a \(5\)% change compared to a harmonic potential. The calculation below shows how \(\langle n \rangle\) varies with temperature for \(\mathrm{I_2}\). Notice how close to zero the average is at room temperature. If the plot were for nitrogen the line would be practically indistinguishable from zero. 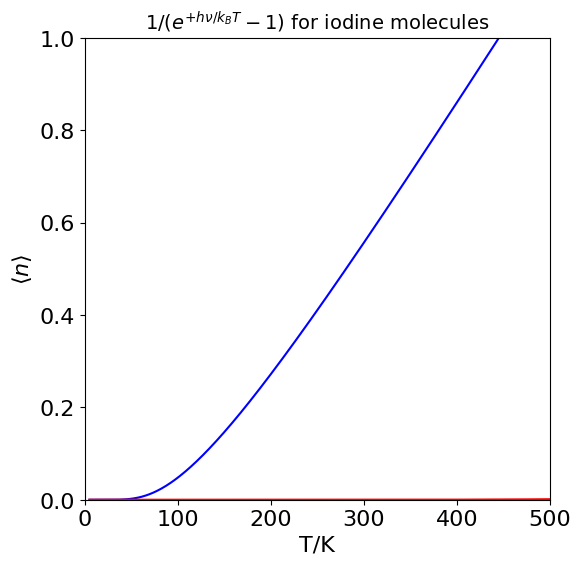 Figure 18. Plot of the average number of vibrational quanta \(\langle n \rangle\) populated vs temperature for I\(_2\). Notice how small a number this is at room temperature. The similar curve for N\(_2\) (red) is so close to zero that it is barely visible on this temperature scale.