Numerically finding the roots of an equation

Numerically finding the roots of an equation#

Two numerical methods are now described for solving equations, which means finding their roots, i.e. the values of \(x\) when \(y = 0\). The Newton - Raphson method uses the derivatives of a function to determine ever-closer approximations to the root of an equation; the related secant and Regula-Falsi (false-position) methods can be used on real experimental data whose equation is unknown. These methods work by making successive approximations.

The equation used in Q62 to work out the optimum strength of bones was given terms of a parameter \(k\); the same equation in \(x\) is \(3-8x^2 +x^4 =0\) and this is quite a tough equation to solve because there are four roots to be found algebraically. Plotting the function \(y = 3 - 8x^2 + x^4\) shows approximately where the roots are; Fig. 23 (left). More difficult equations than this occur in many situations. For instance, a theoretical model might produce a transcendental equation that cannot be solved algebraically when \(y = 0\); for example \(y=e^{-x^2}-2x^2 -2\) as shown in the right-hand graph of Fig.23 and it is then essential to resort to a numerical method to find the root or roots.

9.1 Derivation of the Newton - Raphson algorithm#

An equation for which a solution is sought is be represented as \(f(x) = 0\) and its value is made equal to zero because this is where the root will be found, i.e. its \(y\) value is zero. In the derivation of differentiation the equation

occurs and this is now rewritten as

This is the Newton - Raphson algorithm and only applies where the gradient is not zero. One initial guessed point \(x_1\) is needed to start the calculation and this should be made close to the root if possible, see Fig. 24, otherwise the algorithm may not converge.

Ignoring the second derivative and making \(x_0 \equiv x_i\) to be our initial point, the Newton - Raphson formula is obtained by solving for \(x\) where, to be consistent with the notation of equation (34), change \(x \to x_{i+1}\). 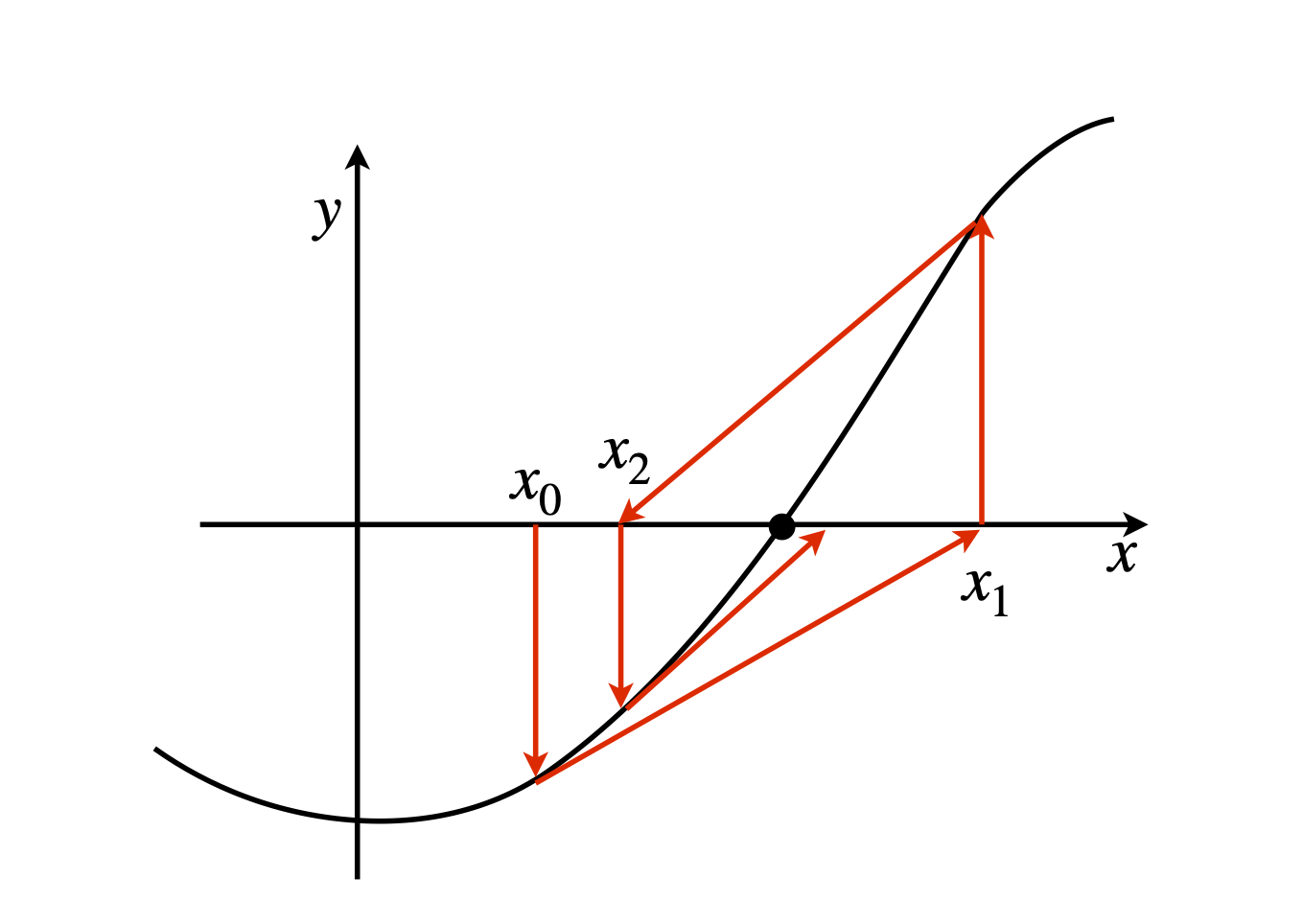 Figure 24. Schematic of the pathways followed by the Newton - Raphson root-finding algorithm, \(x_0\) is the initial value. The tangent at each point is projected along to the x-axis and the next \(y\) value and tangent obtained. This process is repeated and should converge on the root.

9.2 Where the Newton - Raphson method fails#

The Newton - Raphson method will fail when the derivative is zero, but more often it can fail when the next iteration occurs at a point having a gradient that has the opposite sign to that of any previous points. This occurs after a maximum or minimum in the curve is exceeded. Figure 25 explains this more simply. The gradient at point \(x_1\), moves the next point crossing the x-axis away from the root sought, which means that it is usually sensible to plot the function first, and then decide where to put the initial point. For the function shown in the sketch starting closer to the root will keep the iterations between the maximum and minimum in the curve. 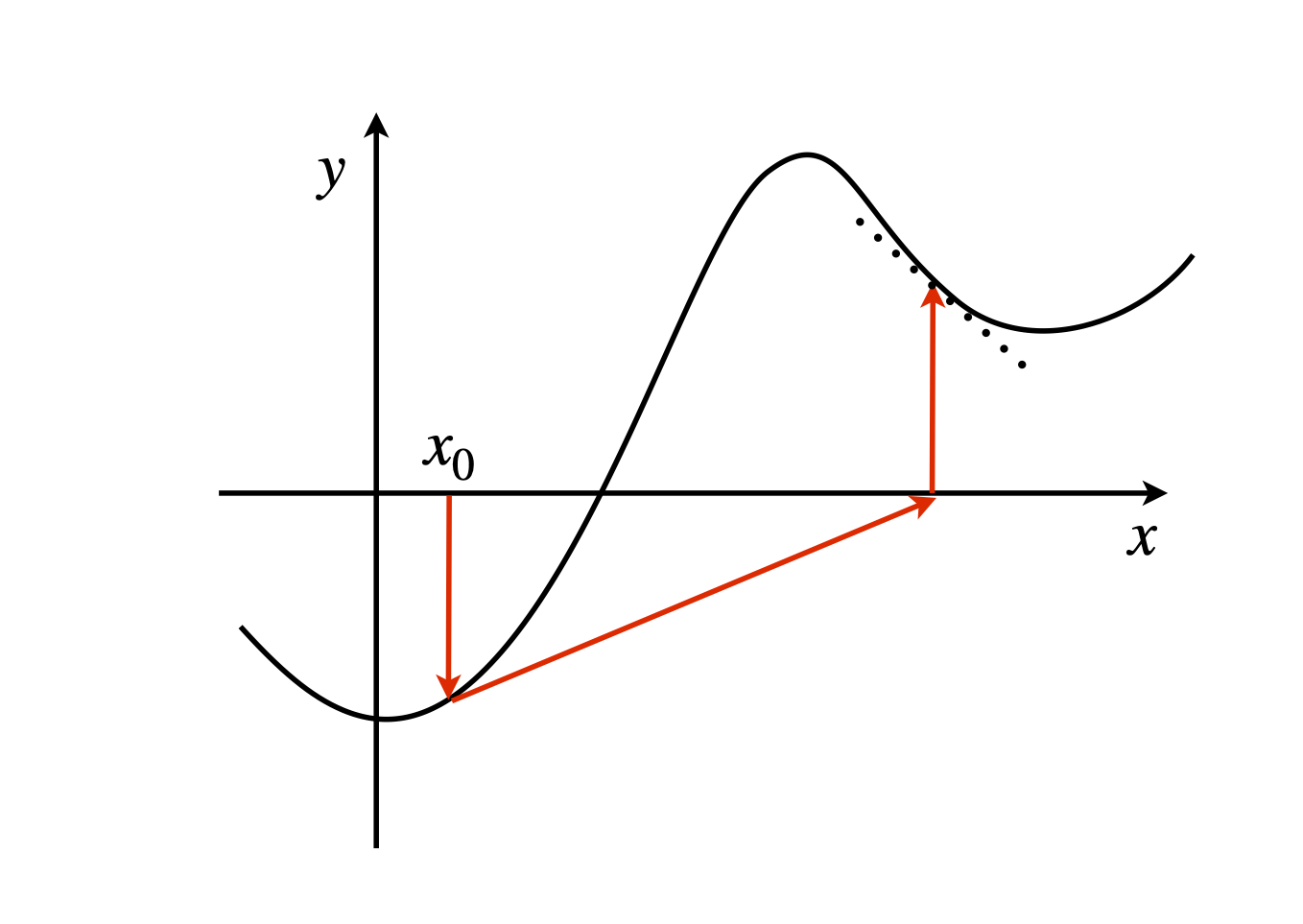 The secant method is effectively a discrete version of the Newton - Raphson method where the gradient is calculated with small but finite differences and is useful when dealing with experimental data. The changes are \(\displaystyle f'(x)\to \frac{\Delta f(x)}{\Delta x} =\frac{f(x_i)-f(x_{i+1})}{x_i-x_{i+1}}\). The algorithm is

This algorithm can be used on real data, i.e. lists of numbers either to find where they accurately cross 0 or by addition or subtraction of a constant to find any other value. The secant and also the bisection methods are described further in Chapter 11, which deals with numerical methods.

To use any of these iterative methods, one or more initial guess for \(x\) has to be made and then the calculation repeated until successive determinations of the function are sufficiently close to 0. You will have to decide how small a difference in \(x\) values is acceptable to stop the calculation and this will vary from case to case. If you want an error of no more than some value \(\epsilon\), then stop the calculation when consecutive results differ by \(\lt\epsilon /2\).