A more difficult equation to solve than those met previously is

by dividing through by \(a(x)\). The general method to use is the variation of parameters, because this can be applied to all differential equations. However, it is quite complicated to use and specialized texts should be consulted (Jeffery 1990; Bronson 1994; Aratyn & Rasinariu 2006). There are, however, at least two methods that can still be used: the main one is to solve the equation as a series expansion and the second reduces the equation to a simpler one, but this can be used only in certain cases.

8.1 Reduction to simpler forms by change of variable and substitution#

Sometimes a simple substitution can produce constant coefficients, but success in this depends very much on the exact form of the equation. The equation

substituting into the differential equation produces \(\displaystyle \frac{d^2y}{du^2}+ay=0\) which is readily solved by standard methods to find \(y\) in terms of \(u\). Notice that if the \(\cos^3(x)y\) term in the original equation was replaced by \(\cos(x)y\), then the equation produced is not as simple and is

where terms in \(x\) have the same power as the differential are called Euler’s or Cauchy’s equation and can be simplified with the substitution \(\displaystyle x = e^{-z}\). The derivative is \(\displaystyle dz/dx = e^{−z}\) and if \(D \equiv d/dz\) then

The different derivatives can be written down as

and used to simplify the differential equation. Note that the right-hand side has derivatives in \(dy/dz\).

then it can be reduced by the transformation \(y = uv\) where

While many types of equations can be solved using the methods described so far, there are a number of problems whose equations can only be solved by a series expansion. These are often different forms of the Schroedinger equation, examples of which are the quantum harmonic oscillator and the radial and angular solutions to the hydrogen atom.

While the series solution method will be described in general, in quantum mechanics and in some other problems, the equations often have a form whose solution is well known because the equation has a specific name. The harmonic oscillator is solved using Hermite’s differential equation and the hydrogen atom requires Legendre’s and Laguerre’s equations. Other commonly used equations are named after Helmholtz, Laplace, and Bessel.

By taking derivatives of \(y\) based on this expansion, the differential equation can be reconstructed in terms of the powers of \(x\) and these constants. To find the constants, the powers of \(x\) are collected together and the resulting group of constants solved assuming that each group of them is zero. What results is a recursion formula with which to calculate the constants and so the equation is solved without any formal integration. It is assumed that the solution can be found with this method, because this is ‘usually’ the case for problems in chemical physics. There is a simple way to check if a series solution is possible and if not, a related method due to Frobenius can be tried in these cases.

(i) The basic series method#

The basic series method is illustrated with the equation

and the solution is assumed to have the form of equation (38). The strategy is

(a)\(\quad\) to differentiate the series solution, and substitute the results into the differential equation;

(b)\(\quad\) collect together coefficients with the same power of \(x\) and set each result to zero;

(c)\(\quad\) find a recursion equation in the coefficients \(a_0,\; a_1, \cdots\) using the initial conditions as the starting points.

step (a) The differential equation is formed out of the series solution by taking the derivatives. These are

and the \(n\) - 2, \(n\) - 1 and nth terms are tabulated below as these are needed later on. Notice that these derivatives are the same for all differential equations solved by the expansion in (38). These coefficients are shown in the table and terms that are useful in other equations are also shown.

step (b) The next step is to substitute these derivatives into the differential equation and then to group all the coefficients with \(x^0,\; x^1,\; x^2,\; x^3 \cdots\) together and make each group zero. The groups of coefficients for each power of x must be zero, as the differential equation is itself equal to zero. For this particular equation, substituting produces

The solution is therefore,

The equation is \(\displaystyle \frac{d^2y}{dx^2}+(\alpha-\beta x^2)y=0\) and following the previous calculation, the recursion equation is

There are two series in the result; one with terms in \(a_0\) and the other in \(a_1\). These are independent solutions.

The Hermite equation is important because it leads to the solution of the Schroedinger equation for the quantum mechanical harmonic oscillator. This is discussed at the end of this section but first a method of solution is determined. The equation has the form

where \(\gamma\) is a real number, Solving as a series leads to the coefficients

The recursion is therefore

and evaluating the coefficients gives the series

Each series is limited to a few terms because of the way the coefficients are formed. The first few Hermite polynomials are

and choosing the constants as

with \(\gamma\) as an even integer and

with \(\gamma\) as an odd integer, converts the series solution to the differential equation into the sum of two Hermite polynomials.

The general solution can then be written as

where \(c_1\) and \(c_2\) are two new constants that are determined by the initial conditions.

The Schroedinger equation for the harmonic oscillator can be written as

where k is the force constant related to the frequency as \(\displaystyle \omega= \sqrt{k/m}\). The equation can be simplified to

with the abbreviations \(\displaystyle a = 2mE/\hbar^2\) and \(\displaystyle b^2 = mk/\hbar^2\). Next, the substitution \(z =bx\) is used to make the equation similar to (40). The solutions are Hermite polynomials multiplied by \(\displaystyle \exp(−z^2/2)\) and these have the characteristic form of the harmonic oscillator wavefunctions. These decay exponentially to zero when \(z\) has a large positive or negative value but oscillate near to zero. The different wavefunctions are found by substituting \(E = \hbar\omega(n + 1/2)\) for each quantum number \(n\). The next figure (19a) shows some wavefunctions for parameters corresponding to the iodine molecule, assuming that it has a harmonic potential. Of course any diatomic molecule does not have a harmonic potential since all real molecules must dissociate into their respective atoms if given enough energy, but the harmonic potential is a good approximation at low energy. 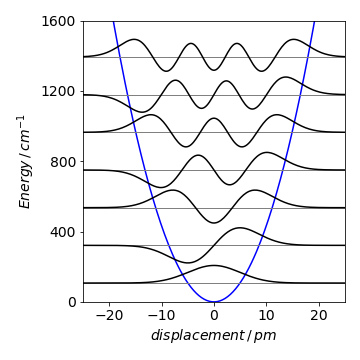 8.3 Checking whether a series solution is possible#

A solution is usually expanded as a series about \(x\) = 0; therefore, the first thing to check is whether the series method is applicable. This means examining the differential equation to ensure that \(x\) = 0 is analytic, hence not singular, which in turn means that \(x\) = 0 does not produce infinity when substituted into the equation. The general equation is

where \(n\) is a constant and when rearranged is