Strategy: To use the Lagrange undetermined multiplier method, first decide what is the constraint and what the function.

Exercise: Write a python worksheet to calculate the distance from the origin to any curve you choose. Test it on the examples and questions above.

(b) Illustrate your answer graphically.

Photons always take a path through a series of optical elements, of any description whatsoever, that minimizes the total time taken. Prove Snell’s law

by calculating the minimum time a photon takes to get from A to B when it crosses a boundary from one medium to another with refractive indices \(n_a\) and \(n_b\) and \(n_b \lt n_a\), as shown in Fig. 32. The speed of light in a medium is \(c/n\) where \(n\) is the medium’s refractive index. Use python/SymPy to do the calculation if you wish. 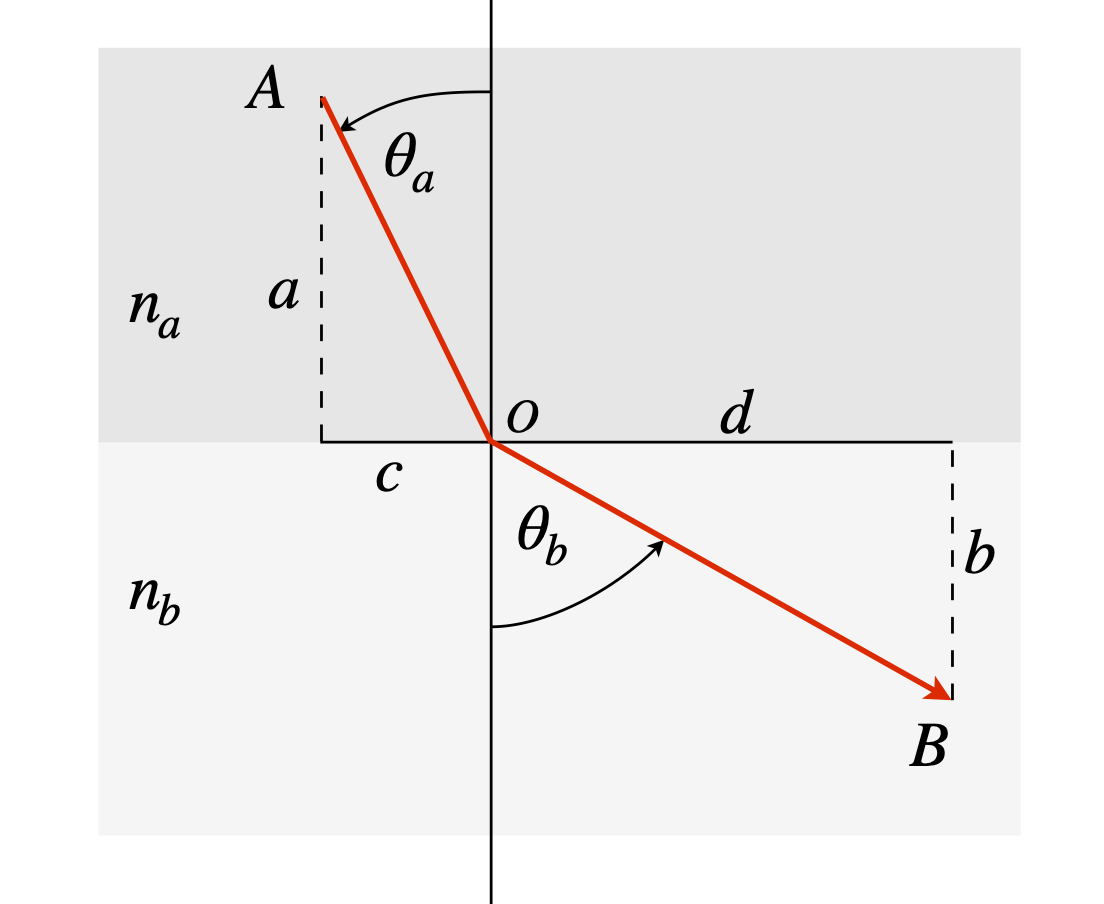 Strategy: The constraint is not mentioned, but as A and B are fixed, the constraint must be to make the horizontal distance \(c + d\) constant. It is not necessary to know this constant because when differentiated it becomes 0. If the vertical distance \(a + b\) was chosen as the constraint then it is found that \(\lambda\), the multiplier, disappears from the problem so this cannot be correct.

Strategy: A thought experiment suggests that the most likely entropy is when each component is present with a mole fraction of 1/\(n\)th of the total if there are \(n\) species present in the mixture, since this is the most varied way the solution can be divided up into its components.

The minimum is found by differentiating, which produces

which has the solution \(x_1\) = 1/2 if the sum of the mole fractions add to unity which, by definition, they must. If there were \(n\) species this approach would become impossible, or at least very tedious, and therefore the Lagrange method is preferable.

In the gas phase reaction \(\mathrm{ F + H_2 \to HF_v + H}\), the product HF is produced in a range of vibrational quantum states, only \(v\) = 0, 1, 2, 3 being energetically possible under the experimental conditions used. The fraction of HF molecules found in vibrational energy level \(v\) is \(x_v\) but these are subject to a constraint such that \(\displaystyle \sum_{n=1}^n x_v = 1\) where \(n\) is the total number of levels populated, which happens to be four in this experiment but of course could be different with different reactants.

The distribution of \(x_v\) vs \(v\) is expected to maximize the entropy; if this is the case what will the distribution be? This is the same as asking the question ‘what then will be the equation for \(x_i\)’? The vibrational contribution to the entropy (in units of \(k_B\)) is defined as \(\displaystyle S = -\sum_{v=0}n x_v \ln(x_v)\).

Strategy: First decide what the function to minimize or maximize is, and because there is a constraint use the Lagrange multiplier method. The \(Q\) function, equation (36), is \(Q = S - \lambda g\) where \(g\) is the constraint. The sum of fractional populations, \(x_v\) is unity and \(S\) is the entropy function.