If \(S\) is the excited singlet state concentration and \(T\) that of the triplet, then the rate equations are

The first equation can be separated to give

where the abbreviation \(\tau =1/(k_f+k_S)\) is made, and \(\tau\) is called the excited state lifetime. Integrating gives

and with initial conditions at time zero, \(S(0) = S_0\) gives after rearranging,

The singlet state population therefore increases or decreases with a lifetime \(\tau\) to reach a steady state value of \(R\tau\) at long times, its initial value being \(S_0\). This happens because in this example the molecules are continuously excited and so the population changes until steady state is reached. In the case that illumination begins at \(t = 0\), the initial singlet state population is zero. If the steady state has already been achieved thus \(S_0 \gt 0\) and then the illumination intensity is changed the the equation also describes this behaviour.

Substituting for \(S\), the second equation becomes \(\displaystyle \frac{dT}{dt}+k_TT=k_SR\tau-k_S(R\tau-S_0)e^{-t/\tau}\) which can be integrated using the integrating factor method. The factor is \(\displaystyle e^{k_TT}\) and the solution,

Figure 38a. The singlet and triplet populations under different illumination conditions showing approach to steady state as shown by dashed lines.

which, using the integrating factor, has the solution

The delta function has the property that

because the delta function is zero everywhere except \(t = t_0\). The result is

(b) The exponentially decaying pulse produces the equation \(\displaystyle \frac{dA}{dt}+k_SA=k_aI_0e^{-k_at}\).

and there is an increase in population as the pulse is switched on and which continues for a time of \(\approx 5/k_S\) or five lifetimes, which is approximately the time an exponential takes to reach about \(90\)% of its final value. 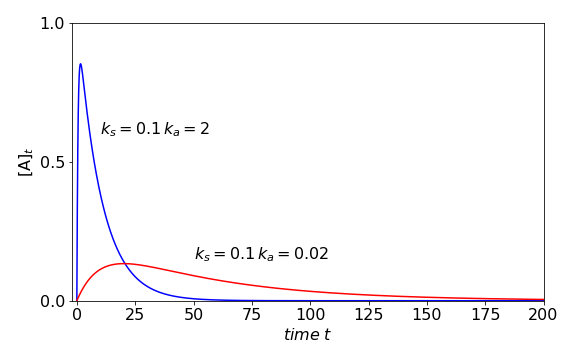 Figure 38b. Population with exciting pulses of different durations with constants , \([A_0]=0\), initial amount is zero and \(k_s=0.1\). Blue line \(k_a=2\), red line \(k_s=0.02\) which shows the slow increase with a long excitation pulse. At long times the fluorescence decay makes the population zero.

Exercise: A more commonly used pulse shape is a Gaussian, \(\displaystyle \exp(-(t - t_0)^2/b) \). The resulting equation can only be solved numerically in terms of an error function, and shows that the population rises to a maximum as the pulse is absorbed. The population would remain constant if the molecule did not react, but as it does, it goes through a maximum. Solve the rate equation and choose some values to illustrate this behaviour. Make sure that the Gaussian is displaced so that its value is essentially zero at zero time.

where the final expression is obtained using \(f = 1\) and this is \(H_3(x)\). The remaining terms can be obtained by the same procedure.

and if the weight is not to leave his hands when his arms are fully extended, then the acceleration upwards must be no greater than \(g\). The acceleration is

The weight does not enter this calculation but is important nevertheless, not least to the body builder; for the greater the mass that is moved, the greater is the work that he has to do, as this is force multiplied by distance.

(a) The force equation for skidding is calculated by equating the linear force with the negative value of friction since this acts as a drag on the motion while the ball skids. The friction will aid the angular motion and is present as a couple because it can only act through the centre of mass or rotation axis. This is the hardest part of the question; the equations are

Surprisingly the velocity at which skidding starts does not depend on the friction coefficient \(\alpha\), but instead, the time when this occurs. The larger \(\alpha\) is, the shorter the time at which skidding stops, but the ball always starts rolling at the same velocity. This occurs when the turning forces exceed the frictional ones, hence depends on the radius and mass of the ball, at a fixed \(\omega_0\), hence the linear velocity is independent of \(\alpha\).

(c) The initial and final energies are

and using \(v = r\omega\) the energy lost to friction is

The energy loss does not depend on the friction coefficient \(\alpha\) because the velocity is independent of this.

(b) Arriving at the earth’s surface from a great distance, means that \(R\) is very great compared to the radius of the earth, and, without any great error from part (a) \(\displaystyle v^2=\frac{2\alpha}{x}\) and substituting for \(\alpha\) gives the velocity arriving at the earth’s surface as\(v=\sqrt{2gr}\) when \(x = r\). This has the value of \(11.18\) km/s, which therefore is also the escape velocity.

The negative root is taken because the distance is decreasing.

Using \(k_2 \equiv k_dM\) clarifies the rate equations which are

The method is to form and solve a second-order equation. Substituting and rearranging gives

To eliminate \(E^*\) use the first equation

Fig 39a. Sketch of monomer and excimer emissions.

The two populations show that the monomer decays as the sum of two exponential terms; the longer one is due to re-population of the monomer from the excimer, whereas the excimer decays as the difference of the same two exponentials, but taken in equal proportions. The excimer intensity, which is initially zero, rises and passes through a maximum. At long times, the decay rate constant of the two species is the same as the equilibrium is set up between the two types of excited states. 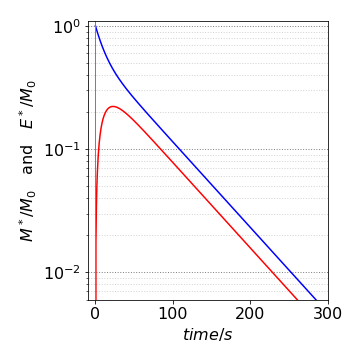 The equation to solve is

Completing the integration on the right, from \(x\) to infinity, which is from \(\varphi\) to \(\varphi = 0\), and rearranging gives

Using SymPy to do the left-hand integration gives

Simplifying this result and combining with the other integral produces

and this can be further simplified to

and the constants \(a_0,\;a_1\) are determined by the initial conditions. When \(a_1 = 0\) the solution is particularly simple. The odd powered series will probably be difficult to calculate accurately as the terms are alternatively positive and negative. The calculation in Sympy can be done as follows.

(b) If the energy \(E\) of the particle is greater than the barrier height, then \(E \ge V_0\). Rearranging the equation gives

(c) For either solution, the amplitude of the barrier transmittance \(T\) is found using \(L_{1,2}\) as defined in the question.

When the energy is above the barrier \(\displaystyle L_1=-ac\tan(ac),\; L_2=ac/\tan(ac)\). To calculate the transmittance, \(A^*_T A_T\) is needed where the * indicates the complex conjugate. This is a somewhat tedious calculation and most easily done using SymPy

The left-hand figure shows resonances even though the particle’s energy is above the barrier. A classical particle (dashed line) would not be affected by the barrier, but in the quantum case, the particle can still ‘feel’ the potential and which leads to oscillation in the transmission past the barrier. The maxima occur when the sine is zero, which happens when its argument is a multiple of \(n\pi\) where \(n\) is a positive integer. The oscillations in transmission are due to interference between incoming particles and those reflected off the barrier. 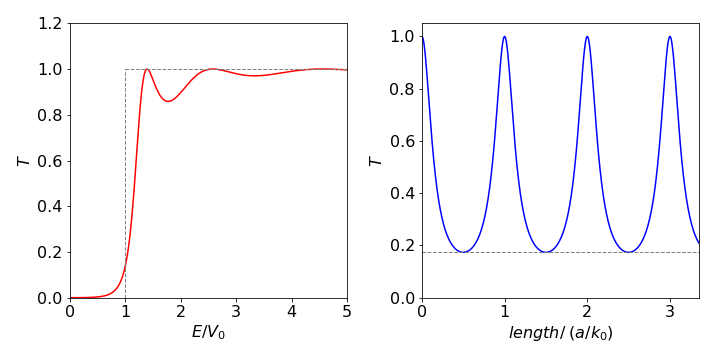 which, since \(T\) is not zero, shows that tunnelling occurs into the barrier. When the argument to the sinh is large, the transmission becomes

hence the probability of transmission decays exponentially when the barrier is wide, the particle is heavy, or the available energy is small relative to the barrier’s height; this effect is called tunnelling. The ‘wave’ entering the barrier is called ‘evanescent’.

Tunnelling is important for electrons and protons and less so for heavier atoms or molecules. This is because for a large mass the exponential is reduced by so much that it approaches zero. Tunnelling also describes the umbrella or vibrational inversion motion by which the H atoms in ammonia move. The electrical current in a scanning tunnelling microscope, as its names suggest, is limited by tunnelling when the probe’s tip is very close to a surface. The superconducting quantum interference device, SQUID, is based on tunnelling of electrons through a thin layer of semiconductor sandwiched between two superconducting surfaces. The amount of tunnelling is very sensitive to any external magnetic field, with important applications in medicine.

Exercise: Calculate the effect of a negative energy barrier, \(V_0 \lt 0\) on the transmission.

Although this is a complicated expression, \(x\) is only found in the sine making the integral straightforward and produces

On expanding the summation, each even \(n\) term is zero and the odd terms produce \(8/\pi^2\) and only the exponentials remain and give a highly non-single exponential decay,

(b) Whatever the value of the second and subsequent terms in the series are, they are clearly far smaller than the first and can reasonably be ignored at long times. Here the ratio, which is the average concentration diffused out of the slab, decays exponentially with a rate constant \(\displaystyle \pi^2D/L^2\),or lifetime \(\displaystyle L^2/\pi^2D\), from which \(D\) can be measured for example in a log linear plot by a least squares calculation. At short times, the second and subsequent terms must be included, but these will soon die away. Typically if \(D\) = 10−9 m2 s−1 and \(L\) = 0.01 m then the lifetime is \(\approx\) 104 s which is quite easily measured, and is well separated from the second term which has a lifetime 9 times smaller. 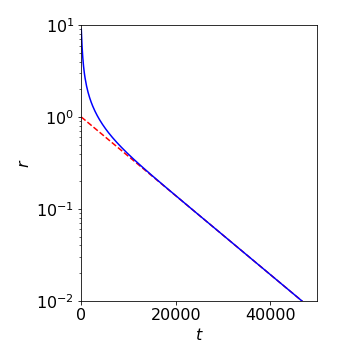 Fig 40a. The ratio \(r\) plotted with several terms (blue) and with just the first term (red) showing the highly non-single exponential decay due to increasing size of \(n^2\) in the exponential terms as the summation proceeds. Measurement of the slope at long times would be sufficient to determine the diffusion coefficient.

The first term is

and the second integral is calculated with Sympy as

Combining these equations,gives the coefficients \(\displaystyle b_n=2(1-(-1)^n)\left( \frac{L}{n\pi} \right)^3\). The solution to the displacement is therefore the series

(b) The displacement can be very well approximated by the first term, the second being nine times smaller and the third even smaller.

It is easier to convert to the exponential form before attempting the differentiations. The calculation has many terms rather than being intrinsically difficult. SymPy will perform the differentiation very easily if the function is defined first.