One use of the Newton - Raphson formula is to calculate square, cube, or \(n^{th}\) roots of numbers.

(b) Does this method produce all the roots to this equation?

Strategy: Look at the plot of the function and start close to one of the roots to make sure you get the right one. The function is even and replacing \(x\) by \(-x\) produces the same value; therefore, only two of the roots need to be calculated because the other two will be \(-1\) times these.

Planck’s black-body radiation distribution law is derived as the product of the average energy of the (Bose - Einstein) photons of frequency \(\nu\), which is

and the density of these states, the number per unit frequency, or \(dn/d\nu = 8\pi\nu^2/c^3\). The energy/unit volume/unit frequency is

When \(\rho(\nu)\) is at its maximum, the temperature and frequency have a fixed ratio. What is this ratio?

Strategy: Because the distribution \(\rho(\nu)\) is never negative, the maximum clearly occurs when \(\displaystyle d\rho(\nu )/d\nu = 0\) and this equation can be solved using the Newton - Raphson method. If temperature and frequency have a fixed ratio when the maximum condition is satisfied, the frequency and temperature should be present only as their ratio \(\nu/T\).

and made an approximation to find \(\lambda_{max}T\). Use the Newton - Raphson method to find an accurate value.

In experiments to measure the unfolding of a protein by pulling on one end with the tip of an AFM, the following equation was used to calculate the force \(f\) at a given retraction speed \(v\) of the AFM tip,

This is a transcendental equation and cannot be solved algebraically. The constant \(x_u\) is a measure of the position of the transition state on the pathway to unfolding and \(h\) is the compliance of the cantilever and protein and is \(\displaystyle h=\frac{1}{k_s}+\frac{dx}{df}\). The compliance describes how easily the cantilever and the protein deform and is the inverse of the effective force constant.

(a)Show that the compliance is a constant independent of force.

Strategy: Use the Newton - Raphson method to calculate \(x_u\) since this is defined in an equation that has no algebraic solution.

Strategy: Write down all four equations for mass and charge balance and equilibrium constants. Use these to eliminate all species other than \(\mathrm{H_3O^+}\), because the equation you need only contains \(\mathrm{H_3O^+}\). In (b) use the Newton - Raphson method to solve for numerical values. Recall that, by definition, \(k_W = 10^{-14}\) at \(25^\mathrm{o}\) C.

If a quantum well is constructed with a length of \(1\) nm, calculate the energy levels, if \(m\) is the mass of an electron, and \(V_0\) the potential depth is

(c) What is the meaning of multiple solutions to the equation?

In each case, comment on any spectra that could be produced by electronic transitions between levels and compare your answer with that of an infinitely deep well. 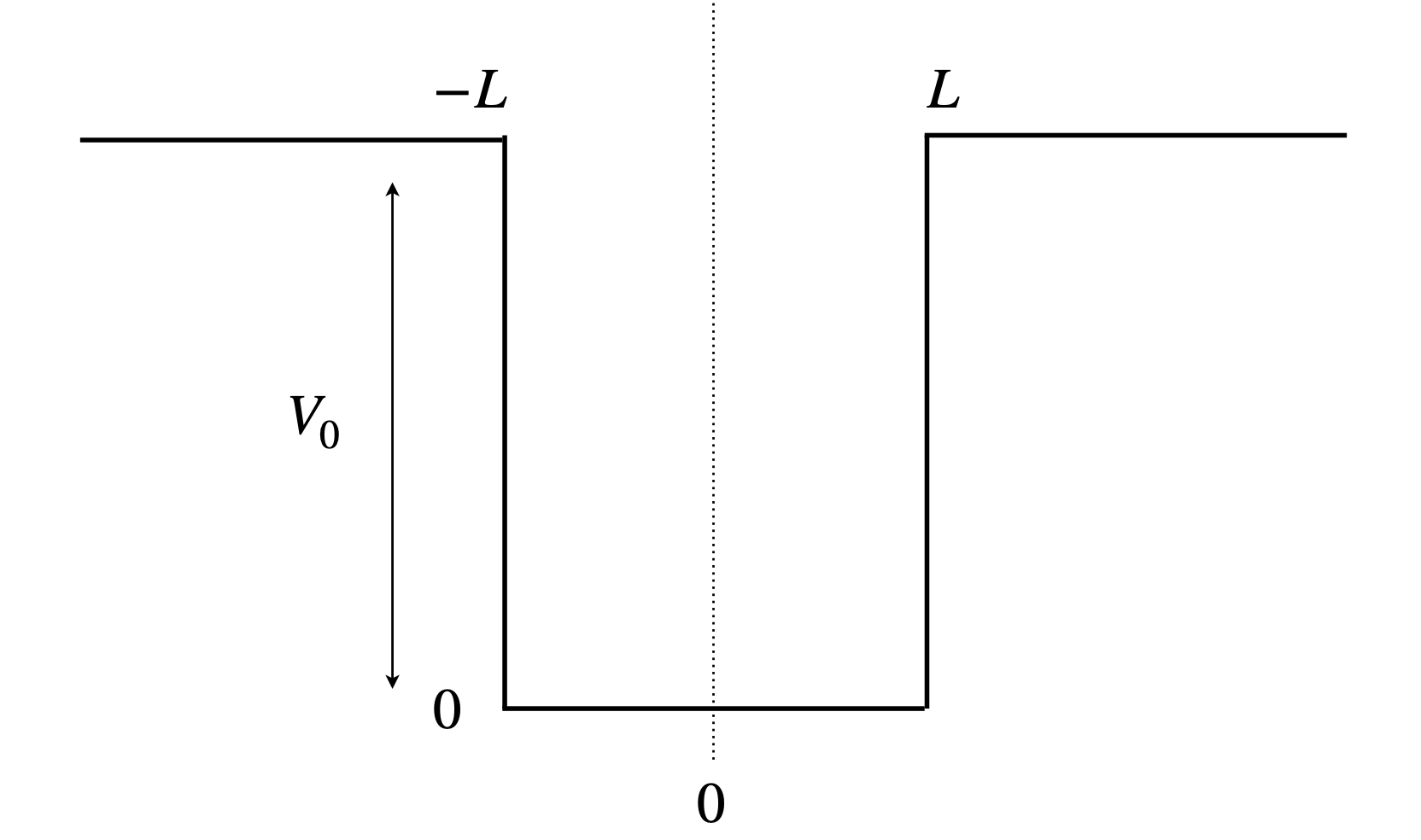 Adding a surfactant and also increasing the viscosity of water by adding one of many compounds such as glycerol lowers its surface tension and makes bubble formation easy. The surface produced has considerable elasticity; the intermolecular forces present must be of longer range than in pure water.

A soap bubble is formed between two wire hoops of radius 1 positioned at \(\pm x\), see Fig. 27. It turns out that there are two possible surfaces for a stable film, one with a wide and one with a narrow waist. The equation describing the line the bubble takes between opposite points on the rings placed at (-\(x\), 1) and (\(x\), 1), is \(y = r \cosh(x/r)\) where \(r\) is the radius of the bubble’s waist where \(x\) = 0. The surface produced is called a catenoid, and the lowest energy surface is a surface of minimum area. At a given size of the wire rings - in this question their radius is unity - there is a maximum value of \(x = x_0\) at which the bubble can exist between the rings. The corresponding waist is \(r_0\). 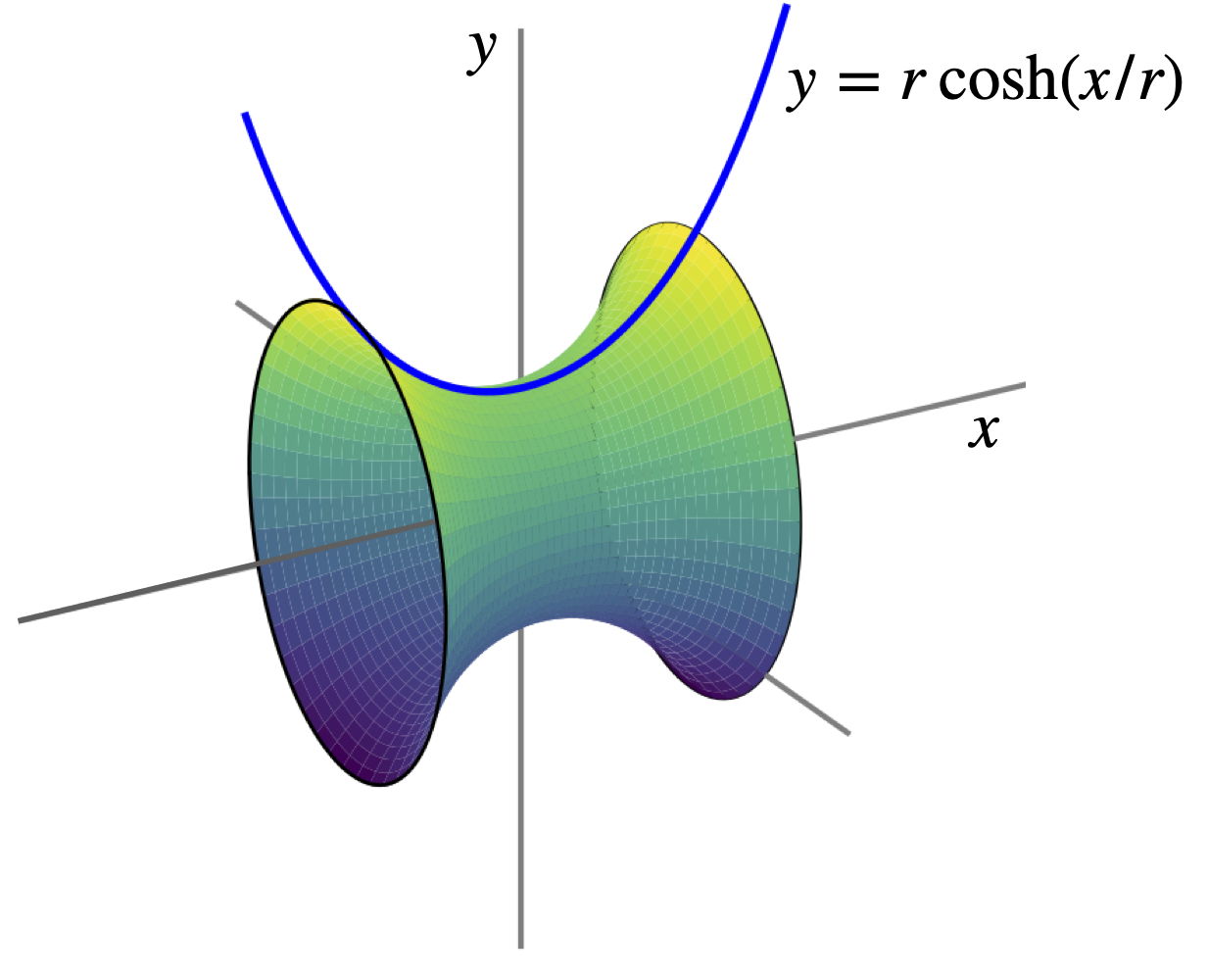 Halley’s method is an alternative to Newton - Raphson and supposedly has the advantage of converging faster than this method and of tripling in accuracy at each iteration. The recursion equation contains both the first \(f'\) and second derivatives \(f''\) and is

An important problem in celestial mechanics is to know where a planet or its moon was at a given time in the past or will be in the future, when its current position is known. Kepler solved this problem with the equation

where \(m\) is called the mean anomaly, \(\epsilon\) the eccentricity, and \(x\) the eccentric anomaly. The word anomaly as used here is a misnomer and is used nowadays out of historical precedence; ‘anomalies’ are angles measured in radians, and shown in Fig. 28. The mean anomaly is \(\displaystyle m = \frac{2\pi}{T} (t - t_0)\) radians where \(T\) is the period of the orbit, approximately \(365\) days for the earth, \(t\) the present number of the day in the year and \(t_0\) the number of the day at which the body is closest to the centre of its orbit. This is generally called the periapse but is called the perihelion for the earth - sun system, and occurs on either \(4^{th}\) or \(5^{th}\) of January each year. The eccentric anomaly \(x\) is the angle from the centre measuring the position of the planet or satellite moon.

As Kepler’s equation is transcendental, it has either to be solved numerically or approximated algebraically. Halley’s method uses the recursion equation given in the previous question (Q83).

Use this method to calculate the position of the earth and its distance from the sun in 2019 at the vernal and autumnal equinoxes, 20 March and 23 September, at the summer and winter solstices, 21 June and 22 December, and at aphelion, 3 July. Perihelion is on 3 January, (See Richards 2002, p. 130 and references therein for further discussion and derivation of Halley’s method). 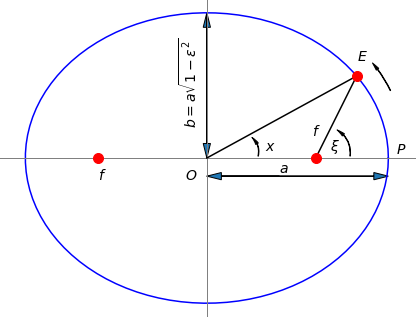 Strategy: (a) Calculate the function at \(\omega = 0\) using l’Hopital’s rule, then calculate \(f(0) = 1/2\) and obtain an equation for \(\omega\). (b) The resulting transcendental equation has to be solved numerically. Plot a graph to convince yourself of the answer.