The torsion or dihedral angle \(\vec \psi\) between two bonds is something we might want to calculate from a chemical structure. A dihedral angle is the angle between two planes, see figure 41. Two such angles, \(\psi\) and \(\phi\) in proteins are used to generate Ramachandran plots as shown in figure 38. A regular or ideal protein helix would have angles \(\phi = -60^\text{o}\) and \(\psi = -50^\text{o}\) and real proteins with a large amount of \(\alpha\)-helical character, such as bacteriorhodopsin, show clusters of points in this area. The other main feature of proteins is the \(\beta\)-sheet and this is a more loosely defined structure and exhibits angles in the top left corner bounded by approximately \(\phi = -60^\text{o}\) and \(\psi = +40^\text{o}\). The exact areas describing the structure are limited by steric repulsion between the atoms as bonds rotate, and are described in most biochemistry, although few chemistry, textbooks. Ramachandran plots can be produced as part of the web interface of sites such as the RCSB Protein Data Bank (www.rcsb.org/pdb/) as well as in textbooks. You could also write your own program that can read ‘.pdb’ or ‘.ent’ files and produce a plot.

Figure 38 Left: Ramachandran plot of the \(\phi\) and \(\psi\) torsion angles in the protein bacteriorhodopsin (pdb 1FBB), which contains extensive \(\alpha\)-helices. Most angles cluster around the values \(\phi = -56^\text{o}, \psi = -53^\text{o}\) typical of an \(\alpha\)-helix. A regular or ideal helix would have angles \(-60^\text{o}\) and \(-50^\text{o}\). The area of \(\beta\)-sheet structure, of which there is very little in this protein, is in the top left corner bounded by approximately \(-55\) and \(+60\) degrees. Right: The structure of the protein shows extensive helical structure. The retinal chromophore, which is positioned in the centre of the column of helices, is shown also.

Part of a peptide chain is shown in figure 39. The backbone forms a repeating sequence -C\(_\alpha\)-C-N-C\(_\alpha\)-C-N-. The peptide unit is the CONH part of the structure, linked together by C\(_\alpha\) atoms containing the amino acid side-chain R. The C\(_\alpha\)-C-O-(N-H) atoms lie in a plane, shown shaded in the top of the figure, as do the atoms O-C-(N-H)-C\(_\alpha\) shown shaded in the lower part. There are two main torsion angles, figure 39, which are \(\phi\), the torsion angle of the planes containing the CN-C\(_\alpha\)C atoms which runs from the C=O to C=O groups, and \(\psi\), the angle between planes containing the NC\(_\alpha\)-CN atoms which starts and ends on the nitrogen atoms. A third angle \(\omega\) is also defined as C\(_\alpha\)C-NC\(_\alpha\) but in a regular protein, this is very close to \(180^\text{o}\). The peptide chain runs from the N terminal to the C. The N terminal of the protein occurs towards the end of the chain with the lowest indexed \(\alpha\)-carbon, therefore the angle \(\phi\) is towards the N terminal, the \(\psi\) towards the C. Torsion angles for side-chains can also be defined; these are given the symbol \(\chi_1, \chi_2\) etc. depending on the type of amino acid. 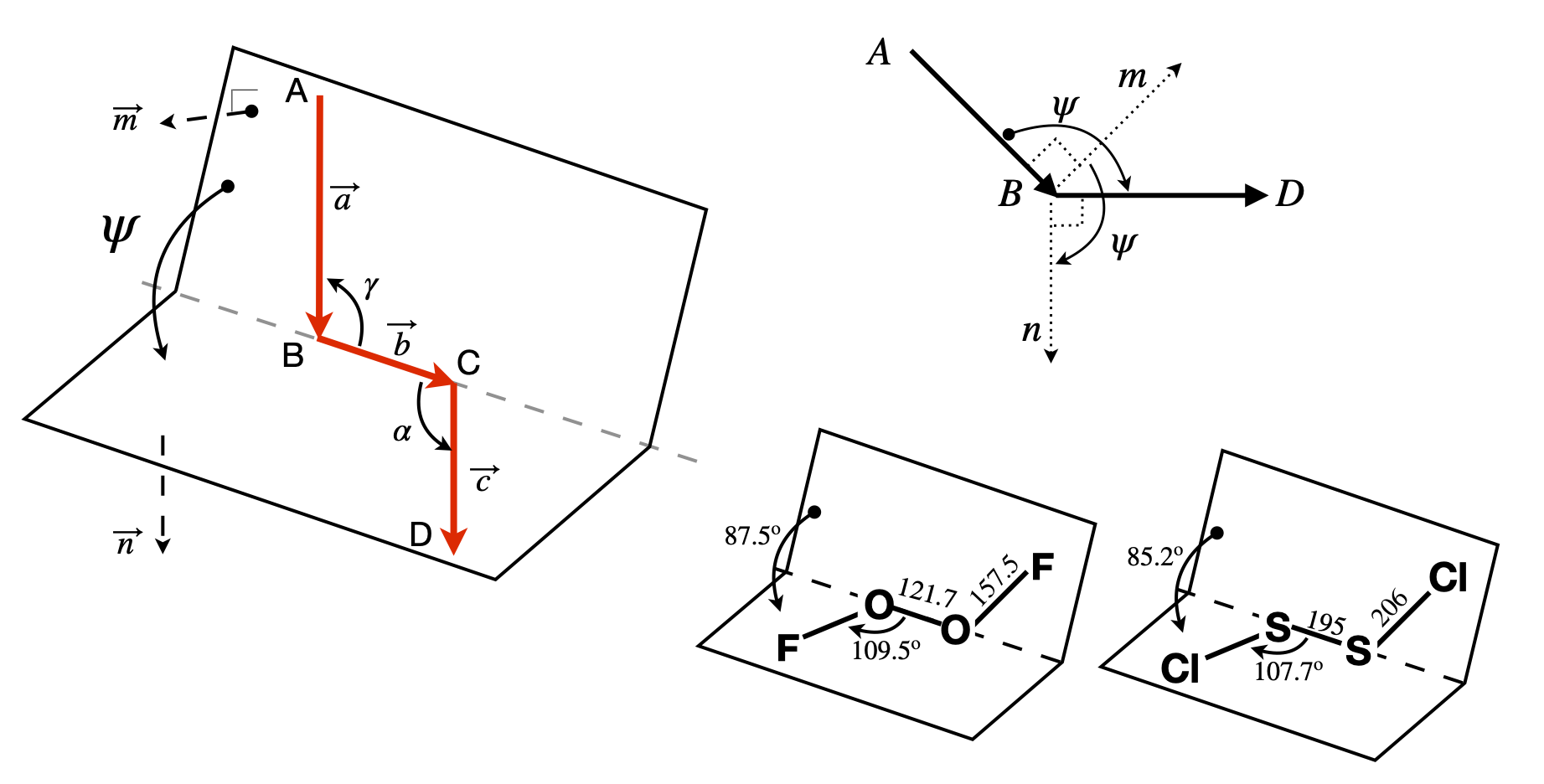 Figure 41. Left: Geometry showing the torsion or dihedral angle \(\psi\). Right: End-view looking down B towards C and showing the positive dihedral angles \(\psi\) between the cross products \(\vec n\) and \(\vec m\) in the planes ABC and BCD. Lower right, two examples of molecules. Distances in pm.

The torsion or dihedral angle \(\psi\) is defined as the angle between the plane ABC and the plane BCD. ABC has a vector \(\vec m\) normal (perpendicular) to \(\vec a \times\vec b\) and BCD has \(\vec n\) normal to \(\vec b \times\vec c\); figure 41. The torsion angle must be independent of the size of the vectors, which means that in the final formula normalized vectors will be used. The angle between vectors \(\vec m\) and \(\vec n\), the dihedral angle \(\psi\), is found by first calculating their dot product,

where \(\vec u_n\) and \(\vec u_m\) are unit vectors along \(\vec n\) and \(\vec m\); see equation 38. The order of vector multiplication is important here. The common vector \(\vec b\) between the two planes is in the middle. If the first vector points towards the join between planes, and the vectors \(\vec a, \vec b, \vec c\) form a head to tail chain, the order is

To evaluate these equations each vector has to be defined in a basis set. The protein data bank crystallographic and NMR data use a basis set of (orthogonal) Cartesian \(x, y, z\) coordinates, as will those from a molecular dynamics simulation. The \(\vec n\) and \(\vec m\) vectors are defined as differences in these values, for example, in the \((i, j, k)\) basis set \(\vec n = p_1\boldsymbol i + p_2\boldsymbol j + p_3\boldsymbol k\) and \(\vec m = q_1\boldsymbol i + q_2\boldsymbol j + q_3\boldsymbol k\) where the \(p\)’s and \(q\)’s are coefficients or coordinates along each axis. In this case, the angle is calculated using

where the transpose (superscript \(T\)) changes the row vector into a column.

Figure 42 shows two residues of strand B of the structure of insulin (www.rcsb.org/ pdf/home.od 2INS.pdb). The torsion angle between the aromatic planes of the phenylalanine and tyrosine residues can be calculated since the coordinates of the atoms are known. It is necessary to choose which atoms are to be involved and to order them to form head to tail vectors. These are shown in the figure.

Figure 42. Two residues of strand B of insulin.

21 Torsion angles in sugars and DNA#

The flexibility of the sugar in DNA makes it possible for more than one type of DNA to exist; the A and B forms differ in the conformation of the sugars being \(C'_3\) endo in A-DNA and \(C'_2\) endo in B-DNA. The notation is shown in figure 43; endo is defined as being on the same side of the ring as the \(C'_5\) carbon, exo on the opposite side.

Fig 44. Examples of torsion angles in different types of DNA

A protein data bank listing contains many lines of introductory information, with prefixes such as TITLE, REMARK, or SEQRES; most of this self-explanatory. The data on the crystal’s space group is also to be found here. After these lines, the atom coordinates start with the word ATOM or HETATM if the atom does not belong to an amino acid, for example a porphyrin. The HETATM lines always follow the ATOM lines. At the end of the list, a TER termination statement occurs and either CONECT index numbers, to help drawing the structure or another ATOM line for the next amino acid chain. Details about the data format can be found on the protein data bank website, www.rcsb.org/pdb/home.do. A summary is given below once the coordinate data starts.

The format of all the lines of ATOM and HETATM information is the same.

Columns \(8-11\) contains the index number of the atom in the protein.

CA is carbon alpha; C the backbone carbon attached to the oxygen labelled O, and N is the backbone nitrogen. Therefore, only atoms with these labels are important in calculating the \(\phi\) and \(\psi\) torsion angles. The amino acid side chain atoms are labelled CB, CD, CZ, NH1, O1, N1 etc. depending upon the amino acid.

Columns \(18-20\) is a three-letter code identifying the amino acid or HOH for water. In DNA just one letter identifies the base C, G, A or T.

Column \(22\) gives the letter indicating the amino acid chain A, B, C etc. In DNA, one chain is listed first then the other.

Columns 24–26 gives the number of the amino acid or nucleic acid base in the list.

Columns \(70-80\). This varies but can be protein type or identification and/or data row number.