Strategy: start with an expression for which a series is known and repeatedly differentiate if necessary to make the function required).

Calculate the atomic weight of lead and its standard deviation using the data below, which is taken from the NIST data handbook ( www.physics.nist.gov/PhysRefData ).

(a) Compare the averages and standard deviations in both cases.

(b) In the second case, write down in mathematical notation a summation formula for \(\langle x \rangle\) and calculate its value. (Using a computer algebra programme makes this much easier).

Repeat the previous calculation for ten-sided dice with numbers \(0 \to 9\). This is effectively estimating the average value of a random digit.

Using the data in the previous question, work out at a given temperature

(b) The average number of quanta \(\langle n \rangle\) in a harmonic oscillator.

(c) Use data for N\(_2\) and I\(_2\) from the previous question to calculate the average number of vibrational levels populated at room temperature. Give a reasoned argument to explain what you think will be the effect on \(\langle n \rangle\) of making the potentials for these molecules anharmonic, such as Morse potentials.

Strategy: Starting with equation (6), work out what \(x\) is and then the probability distribution \(p(x)\). Write down the partition function and then \(xp(x)\) and simplify or rearrange before trying to sum. 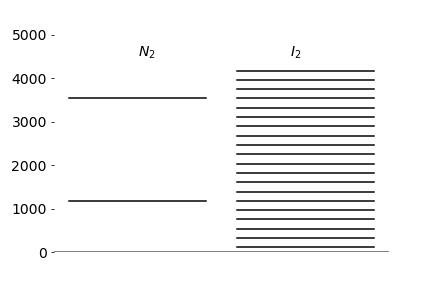 Figure 2. Vibrational energy levels for N\(_2\) and I\(_2\) harmonic oscillators

In this question, an unknown vibrational frequency \(\nu_4\) will be found by combining spectroscopic and thermodynamic data.

The classical energy of a molecule comprises at term \(k_BT/2\) for each ‘squared’ or quadratic term in the calculation of the energy; this is known as the equipartition theorem. Therefore, for translation in each of the \(x-,\; y-\) or \(z-\)directions and each of the rotations about these axes and amount \(k_BT/2\) is added to the energy. (Note that a linear molecule only has moments of inertia about 2 axes.) This limit is true provided the temperature \(T \ge h\nu/k_B\) where \(\nu\) is the quantum and \(k_B\) is Boltzmann’s constant, and applies to translations at all temperatures and rotations for most molecules above \(\approx 10\) K.

Classically, each vibration also contributes \(k_BT\), which is a term \(k_BT/2\) for the vibrational potential energy, as this varies as bond extension squared. However, at room temperature, the classical limit is not reached for vibrations and instead the total quantized vibrational energy for all \(n\) normal modes contributes

to the heat capacity.

The ‘vibrational temperature’ for mode \(i\) is \(\theta_i = h\nu_i /k_B\) where \(\nu_i\) the vibrational frequency. Ethylene \(\mathrm{CH_2=CH_2}\) has one twisting vibrational normal mode \(\nu_4\) of A\(_u\) symmetry species that is neither infrared nor Raman active, and is therefore invisible to spectroscopic methods. This occurs because the molecule has a centre of symmetry and hence no symmetric vibration can be IR active (no changing dipole) and no anti-symmetric vibration Raman active (no change in polarisability). This is true for any molecule in a point group containing a centre of inversion.

(a) Explain why there are twelve normal mode vibrations.

(b) Show that ethylene belongs to the D\(_{2h}\) point group and that only normal modes belonging to the A\(_u\) symmetry species are both IR and Raman inactive.

Strategy: Find \(C_V\) for the vibrations and add terms for the rotations and translations at their classical limit. Look up how \(C_V\) and \(C_p\) differ. Compare the calculated \(C_p\) with the experimental value. Work out the summation, then isolate the term due to the unknown vibrational frequency and solve this equation for the A\(_u\) frequency.

The average energy of an ensemble (i.e. group) of molecules is given by \(\langle E \rangle\). Each molecule is in an energy level with value \(E\) and these levels are discrete because the molecules obey the laws of quantum mechanics. The energies are \(E = 0, 1, 2, \cdot, \;\infty\).

(b) Calculate \(\langle E^2 \rangle \) and find its value at high and low temperatures.

(d) Comment on the formula obtained as the temperature is changed.

Strategy: This is a long question, so split it into smaller parts. Start by writing down the formulae needed and look up the summations in the table, or use computer algebra (SymPy or Maple) to do them for you. The answer to part of the first question is given in the text.

A sample of CHCl\(_3\) is placed in an NMR spectrometer with a magnetic field of intensity \(B\) tesla. The energy (in joules) of the \(^1\)H nuclei is given by \(E_m = -\gamma m\hbar B\) where \(\gamma\) is the magneto-gyric ratio, which is positive and describes how strongly the nuclei interact with the field, and \(m\) is the spin quantum number along the direction of the magnetic field which, for a spin \(1/2\) nucleus, has only the values \(m = \pm 1/2\). The lowest energy state is that which aligns itself with the magnetic field and has \(m = 1/2\) and is the state in which the molecule is more likely to be found.

This problem illustrates a subtle and possibly misleading effect when summing quantum numbers and energies not originating at zero.

(a) What is the energy gap \(\Delta E\) responsible for the NMR transition and how does it compare to thermal energy at room temperature?

(b) Using the Boltzmann distribution, derive equations for \(\langle E \rangle\) and \(\langle E^2 \rangle\). Derive the low and high temperature limits. Do they make sense? Move the zero of energy to the lowest level (see figure in answers) and repeat the calculation.

notice how only odd or even states are summed.

(a) Calculate the total degeneracy of the \(J\)th rotational level with ortho - and with para - nuclei. Calculate and plot the equilibrium fraction of ortho - molecules present in H\(_2\) with temperature. The rotational constant is \(60.8 \,\mathrm{cm^{-1}}\). Calculate the composition at room temperature, say \(300\) K, and at the normal boiling temperature of \(20.4\) K.

(b) Calculate how the rotational contribution to the total heat capacity varies with temperature. Explain the shape of the heat capacity curve.

Strategy: Calculate the ortho- and para- series separately but with only alternate odd or even terms. At equilibrium the fraction of ortho-hydrogen present is \(Z_{ortho} /(Z_{ortho} + Z_{para})\). The heat capacity is the rate of change of internal energy with temperature, so it is necessary to find the relationship between the partition function and internal energy. Look this up in your textbook.

Type II restriction enzymes are used by bacteria to inactivate viral DNA by identifying then cutting out specific sequences usually \(n = 4, 6\), or \(8\) base pairs long; these are called ‘words’. The bacteria’s own DNA is protected from this enzyme by methylation. The resulting distribution of shorter segments of DNA can be used as a DNA fingerprint if the fragments are cloned so that there is enough material to be characterized, for example, by gel electrophoresis.

Assuming that the four base pairs occur with equal probability, the fraction \(1/4n\) is the probability of reading the correct \(n\) letter word that leads to DNA scission. The enzyme then moves along the DNA to read the next word.

(b) Is this distribution normalized?

(c) Show that the mean distance to the next word is approximately 4\(n\) base pairs.

Strategy: Think about the chance that one word is read and then not read and recall that probabilities multiply.

A ball that is initially stationary is dropped from a height \(h\). Its position \(y\) at time \( t\) is \(\displaystyle y = -gt^2/2 + h\) if its motion is not impeded by friction due to the viscosity of the air. The mass of the ball is \(m,\, g\) the acceleration due to gravity, and \(h\) the initial height. The equation describing the balance of forces is

The similar equation including friction from the air, which is proportional to velocity, is

where \(c\) is a constant. The solution to this equation is

Show that this solution reduces to that of the first when \(c=0\).