(b) You will need to consult a point group table, see www.molecule-viewer.com for tables and an explanation of the symmetry labels and elements.

Looking at a D\(_{2h}\) point group (below), IR active vibrations belong to symmetry species that transform as translations because the transition dipole in turn transforms in this way; these are B\(_{1u}\), B\(_{2u}\) and B\(_{3u}\). The translations are found as \(x,\; y\), or \(z\) in the first column after the characters. Raman spectroscopy depends on a change in the shape of the molecule (via the polarisability) and so transforms as squared terms in the point group, found in the right-hand column as \(x^2,\, xy\) and so forth. Only A\(_u\) has neither of these transformations.

(c) The vibrational partition function is \( \displaystyle Z = e^{-h\nu/2k_BT}/(1 - e^{-h\nu/k_BT})\) and differentiating \(\ln(Z)\) with respect to temperature to obtain the energy and multiplying by \(k_BT^2\) and differentiating again gives the heat capacity \(C_V\). This is the calculation for one vibrational mode. At the end the values for all \(n\) modes will have to be added.

Using the definition of vibrational temperature the result simplifies to

Because heat capacity is \(dE/dT\) and the total heat capacity has three terms each of \(k_B/2\) for translation and also for rotational motion, then in total for \(n\) vibrational modes

(d) Convert from \(C_V\) to \(C_p\) because experiments are done at constant pressure and an additional \(k_B\) is added since \(C_p = C_V + k_B\) per molecule. Because the frequencies are given in cm\(^{-1}\), they must be converted to s\(^{-1}\) by multiplying by the speed of light in cm s\(^{-1}\). The vibrational frequencies, rather than vibrational temperatures, are put directly into the equations. The constants are collected into variable \(a\) only to simplify the equations.

The calculation below uses a built in function (fsolve) and also the Newton-Raphson method which is accurate enough in this instance. Plotting the function can help in choosing a starting value when finding the root of the equation. 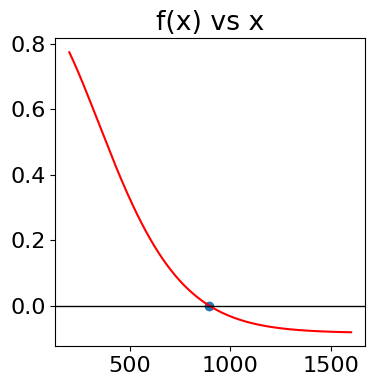 At high temperatures the exponential terms can be expanded as a series;

(b) The average energy squared is

The partition function is the same but the numerator is now more difficult to evaluate. This can be done by summing as \(\displaystyle \sum n^2n^x\) and then substituting \(\displaystyle E \equiv n,\; x=\exp(-1/k_BT)\). Using the computer algebra package SymPy gives the following result;

and doing the same for the partition function gives

(c) The variance can now be written down using the average values just calculated;

At low temperatures \(\sigma_E^2 \to 0\) because all the energy is in the lowest few levels and therefore is not spread about. When \(T\) is large the variance increases with temperature and is \(\sigma_E^2 = (k_BT)^2\). The normalized standard deviation is

(d) At very low temperatures, as \(T \to 0\), the ratio \(\sigma_E/\langle E\rangle \to 1\) and the spread of energy levels is the same as the energy itself although this is small. Conversely, when \(T \rightarrow \infty\) the ratio becomes infinity but this again means that the spread of energy is as large as the energy itself, and all energy levels are equally populated.

(e) Much of the hard work is now done and to find the heat capacity at constant volume \(C_V\) requires differentiating the average energy with respect to temperature.

Figure 20. This figure shows the values of the energy levels (left) when based around zero, and (right) with the lowest level made to be zero.

(b) There are only two states to consider in the partition function, equation (11), and therefore it is tempting to write the average energy, where \(E_m=-\gamma m\hbar B\), as

but this is wrong. To see why we continue the calculation and for clarity we make the substitution \(a=\gamma \hbar B/(2k_B)\). Expanding the summation produces

At low temperatures \(\displaystyle e^{a/T}\) is large compared to the negative exponentials and thus as \(T\rightarrow 0, \langle E \rangle \approx -\gamma \hbar B/2\) which is the energy of the lowest level. At the other limit as \(T \approx \infty\) the term \(a/T \) is small and the exponential can be expanded as \(e^{\pm a/T}=1\pm a/T\) producing \(\langle E \rangle \approx a^2k_B/T =(\gamma \hbar B)^2/(4k_BT)\). All this seems to be correct so far, and as the temperature increases the average energy also tends towards zero, meaning that both levels are equally populated, also as expected.

which evaluates to \(\langle E^2 \rangle =(\gamma \hbar B)^2/4\), which is incorrect. This average must depend on temperature simply because at low temperatures all the nuclei are in the lowest energy level.

The reason for this subtle error is that the energy levels are symmetrically disposed about zero and, when the energy is squared, the \(m = -1/2\) and \(m = +1/2\) levels have the same positive value in the summation. Perhaps, as a result, the value for \(\langle E \rangle\) is also wrong; at this point we don’t know if this is the case, so this is re-evaluated with the lowest energy set to zero.

Suppose the energy zero is moved to \(-\gamma \hbar B/2\), by adding minus this amount to both energies as shown on the right hand side of figure 20 means that the summation is from \(0 \to \gamma\hbar B\). The average energy now becomes

which is the same result as before provided \(-\gamma \hbar B/2\) is added because of the difference in where the zero of energy is set. The average of the squared energy is now

which depends upon temperature as expected.

The low temperature limits are calculated by expanding the exponential terms. This is easier to do by making the change \(\beta = 1/k_BT\) giving 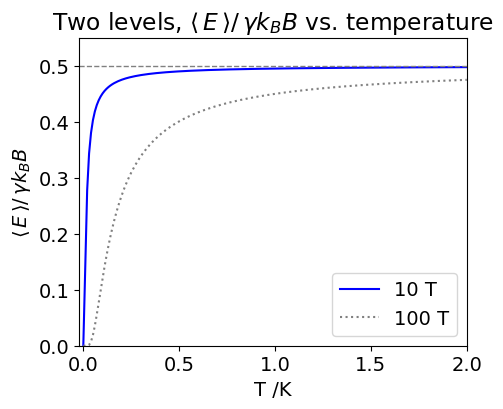 From the figure it is noticed that even at \(2\) K an almost equal population of spins are present because the average energy is \(\approx 0.5\) and only two levels are present. The small difference between the populations of the two levels means that NMR spectroscopy is a relatively insensitive technique. However, this insensitivity is ameliorated by the fact that the macroscopic polarization can be measured because the nuclear spins are excited coherently. The NMR signal is proportional to the sum squared of the individual magnetic moments rather than the squared sum, i.e. the measured signal is the sum \((\mu_1 + \mu_2 + \mu_3 + \cdots )^2\) rather than the sum \((\mu_1^2 + \mu_2^2 + \mu_3^2 + \cdots)\) the former being far larger than the latter. Try it with some numbers!

To calculate each partition function, add either the odd (ortho) or the even (para) numbered rotational levels together as shown in the next calculation. The fraction of ortho is plotted vs temperature. 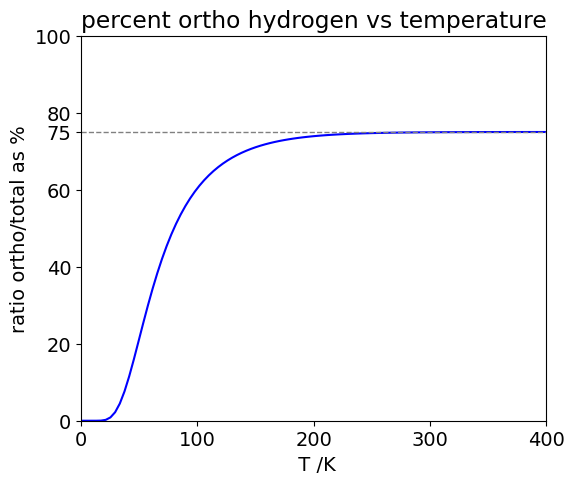 Figure 22b. The fraction of ortho- H\(_2\) vs temperature assuming that no inter-conversion between the spin states occurs. The grey dashed line shows the 3:1 ratio.

(b) In calculating the heat capacity of naturally occurring hydrogen add \(3/4\) of the ortho- to \(1/4\) of the para- molecules. Three significant figures is all that rotational constant \(B\) or the temperature is given to, so this should be sufficient for the answer. The constant volume heat capacity is calculated using \(\displaystyle U=k_BT^2 d\frac{\ln(Z)}{dT}\) , and \(\displaystyle C_V =\frac{dU}{dT}\) for each spin state, with subscripts p for para and o for ortho.

The heat capacity \(dU/dT\) is even nastier as the derivative is the ratio of two terms, however, it is easiest to do as a product, for example

The derivative \(dZ/dT\) has already been evaluated above, and

(c) The average length is found by using the standard formula;

Letting \(c = 0\) makes the second solution infinity because \(c\) is in the denominator. It is also in the numerator of the first term. The correct solution is to expand the exponential and look at the case when \(c\) is small, i.e. in the limit when \( c \to 0\). This results in