Parametric equations are used because many complex equations do not simplify to something that can be readily integrated and it is simply easier to use the parametric form.

Complex curves are often given as a pair of parametric equations. The ellipse \(\displaystyle \frac{x^2}{a^2} + \frac{y^2}{b^2} = 1\) , for instance, is represented also as the pair of equations in the parametric variable \(t\) as

Using Sympy gives the answer \(A=\pi a b/4\). One might surmise that the total area is \(\pi ab/4\) by analogy with a quadrant or one quarter the area of a circle. 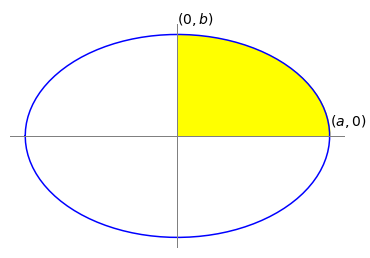 Sometimes equations are simpler and calculations easier when not done in Cartesian (rectilinear) coordinates but in polar or one of several other coordinate systems. Using Cartesian coordinates to integrate closed curves, such as circles or cardioids and so forth, can also lead to some pitfalls. The equation of a circle of radius 1 and centred at the origin \((0, 0)\) is \(x^2 + y^2 = 1\). When integrated, because exactly half the area is above the x-axis, this part should have a positive area and the half below a negative one making the total zero, whereas the area is clearly \(\pi\). Rearranging to find \(y\) and integrating gives \(\int_{-1}^{1}\sqrt{1-x^2}dx=\pi/2\) and although the integration was across the diameter \(x = -1\) to \(1\), only half of the area has been evaluated. This is because, by convention, only the positive part of the square root was used, and although it appears that we have integrated over the whole area in fact only half of the area has been covered. If \(-\int_{-1}^{1}\sqrt{1-x^2}dx\) is added to account for the other half, the result is zero. The area of the cardioid shown in Fig. 11 would similarly be zero because there is as much negative area below the x-axis as there is positive above it. A common way round this problem of false zero areas is to identify a symmetrical curve, calculate part of it and multiply the result according to symmetry, to obtain the whole area.

Two-dimensional curves represented in plane polar coordinates (\(r, \,\theta)\) have coordinates that are the radius \(r\), the distance from the origin called the pole, to a point on the curve at an angle \(\theta\), and this angle is conventionally measured anticlockwise upwards from the horizontal. The pole is at \(r = 0\) and the horizontal \(\theta = 0\). A circle of radius \(a\) centred at the origin is \(x^2 + y^2 = a^2\) in Cartesian coordinates but \(r = a\) in plane polar coordinates.

Suppose that the origin of the coordinates lies on the circumference of a circle and the line \(\theta = 0\) passes horizontally through the circle’s centre, the equation \(r = 2a \cos(\theta)\) describes this circle, see Fig. 12.

The cardioid shown in Fig. 11 has the form \(r = a\left(1 + \cos(\theta)\right)\) and shows the definitions of r and θ. The equations to convert to plane polar coordinates from Cartesian ones are described in Chapter 1.6.1 and are

The integration limits are in the range \(0 < \alpha +\beta \le 2\pi\) and therefore cover the whole range of angles at maximum.

Figure 10. Geometry to define the area swept out by radius arm \(r\).

Imagine in Figure 11 that the radius arm \(r\) extending from \(0 \to \alpha\) is moved anticlockwise to point \(\beta\), a movement that produces the segmental area between the pole and \(\alpha\) to \(\beta\). If \(\beta\) continues all the way round and back again to \(\alpha\) then the whole area is calculated. Two cases now have to be distinguished; the first when the pole is within the curve as shown on the right of Figure 11. The second is when the pole is outside the curve or on its circumference and these cases are dealt with next. 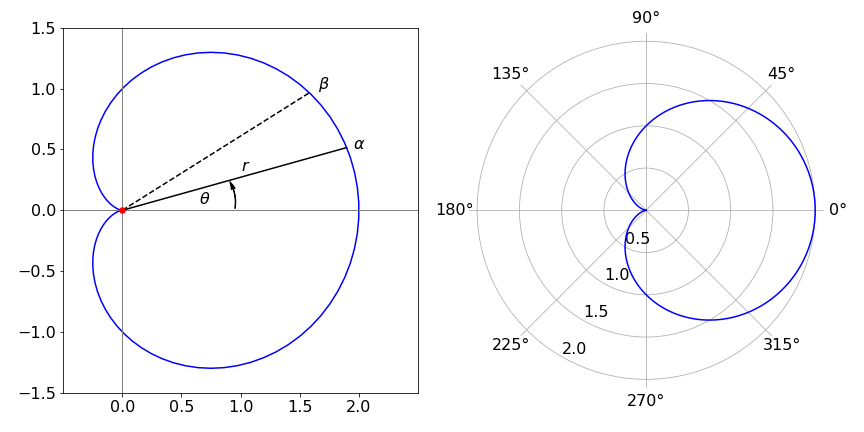 7.1 Limits when the pole is inside the curve#

The calculation can be done by changing the sine to exponential form and expanding the brackets. If you are not convinced of the simplicity produced by using polar coordinates, try doing this calculation in Cartesian coordinates by changing back using equation 18.

7.2 Limits when the pole is on the circumference or outside the curve#

When the pole is on the curve itself or outside the curve, then the integration limits have to be calculated for each particular curve. The circle with its origin on the circumference, Figure 12, has the equation \(r = 2a\cos(\theta)\) and the area is

Notice that the limits are not \(0 \to 2\pi\) but \(-\pi/2 \to \pi/2\). Since the pole is not inside the curve, the angle the tangent makes with the horizontal at the pole, going clockwise and anticlockwise, must be calculated. This is done by making \(r = 0\) and solving the equations. 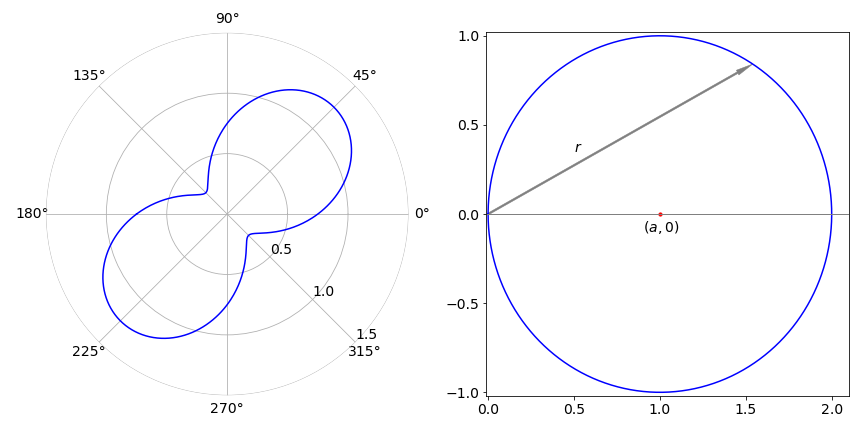 The cardioid in Cartesian coordinates is the quartic \(\displaystyle (x^2+y^2-ax)^2-a^2(x^2+y^2)=0\) which would have to be solved to obtain \(y =\cdots\) before integration. Looking at this equation it is easy to appreciate how much simpler the polar equation is to integrate.

The general form of equation \(r = a + b \cos(\theta)\) is called a Limacon. The cardioid is so named after its heart shape and is, incidentally, the curve generated by a point on the circumference of a disc while rotating it without slipping around a similar disc. The moving disc performs two rotations in traversing the circumference of the inner one; you can try it with two similar coins.