(b) Adding new loss terms to both species gives

Calculating the steady-state populations produces \(Y_e = X_e = 0\) as one possibility, as before, and the second steady-state is

The equilibrium prey population is \(Y_e\) and this is increased relative to the case when \(k_{22} = 0\) but \(X_e\), the predator equilibrium value, is decreased. This increase in prey population and decrease in predator, is the opposite of what is wanted if the prey is a pest, such as aphids, whose population is kept in check by predators such as ladybirds. Adding a pesticide that potentially kills everything, causes the prey (aphid) population to rise and this is sometimes called the Volterra effect.

The consequence of this is clear in the numerical calculations if, for example, \(k_{11} = 0.9,\; k_{22} = 0.2\), and giving the other rate constants the values quoted in the text. The predator is poisoned and its population periodically decreases almost reaching zero; the prey is also poisoned to a certain extent, but now, not predated, and this allows its population to remain relatively large compared to that without poisoning, Figures 19 and 39. Compare also the phase plane in Figure 39 with that in Figure 20. 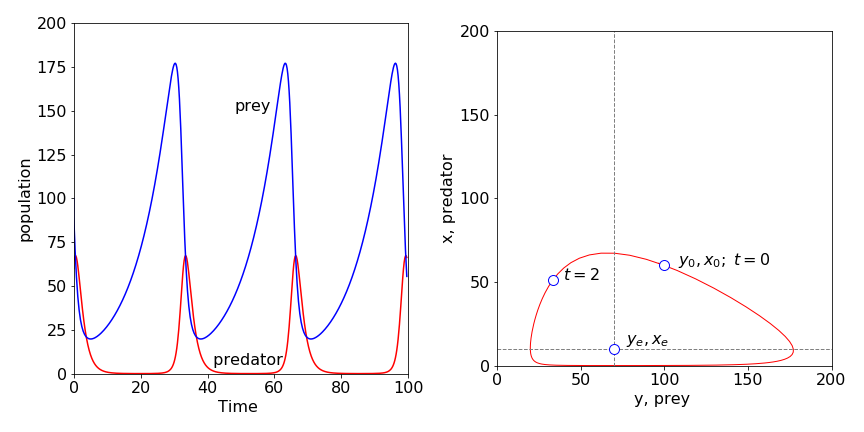 Figure 39. Populations of predator (red line) and prey when both are poisoned with rate constants \(k_{11} = 0.9 ,\; k_{22} = 0.2\). The prey population is increased substantially over that when no poisoning occurs and the predator population (dashed line) is greatly reduced. The nullclines are shown on the phase plane. The point is at t = 2 is shown the initial point is \(X_0, Y_0\).

which can be solved as outlined in section 8.1.

of which the last pair is the important one. The nullclines are the equations obtained when \(dY/dt = dX/dt = 0\), hence

The \(X\) nullcline depends on \(Y\) because of the \(Y^2\) term in the initial equation. Plotting the populations, calculated using the Euler method, Algorithm 15, shows that these oscillate but tend towards the last of the three equilibrium points and produce, after a while, constant populations, Fig. 11.40. The phase plane shows the populations spiraling to this point as if attracted to it. The spiraling occurs because the amplitude of the oscillations decrease with time and a single point is reached which is the equilibrium prey and predator population 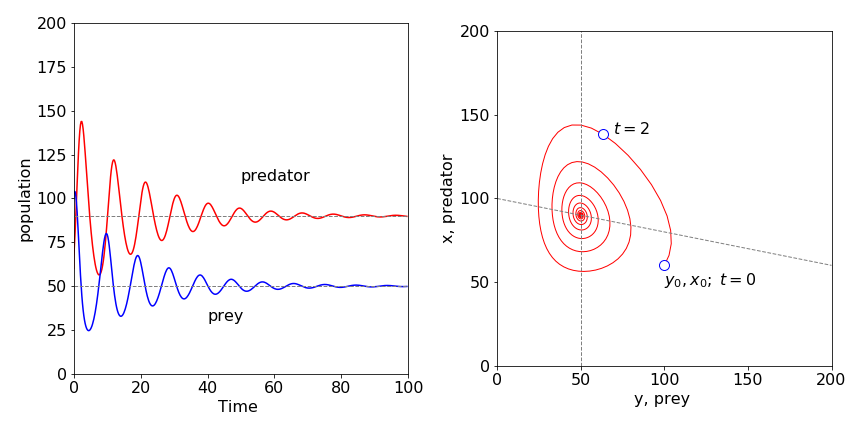 To explain these results we argue as follows: In the absence of predators, the initial number of prey population is less than it could be with the amount of grass present and would therefore increase to a constant level. If there were no prey, the predators would die off with a rate constant \(k_3\).

In the actual situation, the predator eats the prey and the predator population increases and shortly after this, the prey population maximizes and then falls due to predation. The predator population also falls as prey becomes scare, because predators die by starvation. The prey population now begins to recover, predators being scarce for the time being; however, it can only increase somewhat because of the limited food. The predator then starts to catch more prey because they are now more numerous, and this limits the prey’s population and the cycle repeats itself. However, the prey’s population is also limited by the amount of food (energy) available and it cannot fully recover. This limits the predator also, for if there are less prey then more predators will starve. This ‘damping’ causes the oscillations in population to become smaller and eventually they become insignificant. They are damped out, effectively, by the limited food supply, and a dynamic steady-state is reached.

(a) The rate equations are

(c) Using Algorithm 15 to integrate coupled equations, the following graphs, Figure 41, were produced with 1000 points in the integration 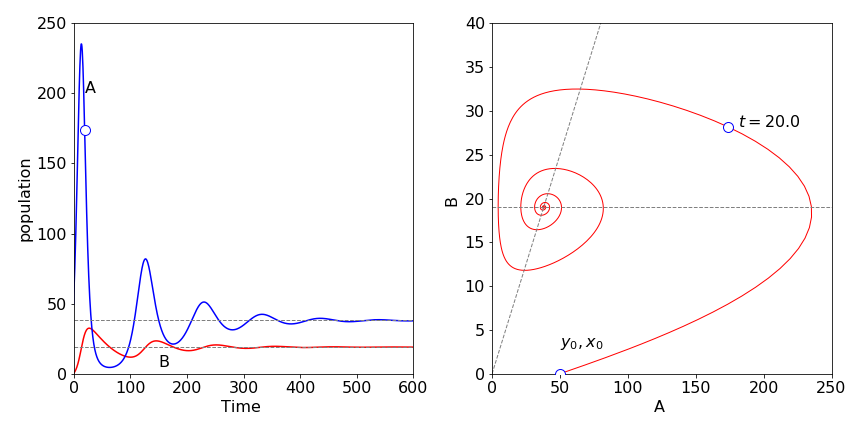 The concentration of \(B\) also goes through a maximum because, not only is it produced from \(A\) and reacts with \(A\), but also it decomposes with rate constant \(k_4\). The concentration of \(A\) reaches a minimum while \(B\) is still decaying, and therefore the term \(k_3AB\) is small. This allows \(A\) to increase again, via the first reaction, which causes more \(B\) to form and another oscillatory event is produced. However, \(B\) is not zero at the start of this second event, and this limits the growth of \(A\). Eventually, a damped oscillating equilibrium is reached. The spiral in the phase plane occurs because the amplitude of \(A\) and \(B\) decreases with time. The nullclines pass through the maximum and minimum concentrations of each oscillation, at which point, the phase plane curve is horizontal or vertical.

(a) With the pendulum inverted the initial angle is \(\pi\), it is only possible to continue until about \(t = 30\) before the calculation fails using any of the the Euler methods. Failure is sudden and easily observed because the angle does not remain at \(\pi\). Using a python/numpy built in integrator produces better results , but inevitably this also fails.

(b) The velocity vs time most obviously shows non-linearity, Figure 42 shows this, but it is only clear when the initial angle is almost \(\pi\) radians. The phase plane plot produced should be similar to that of Figure 14. The non-linear motion is apparent when the curves are not circles. 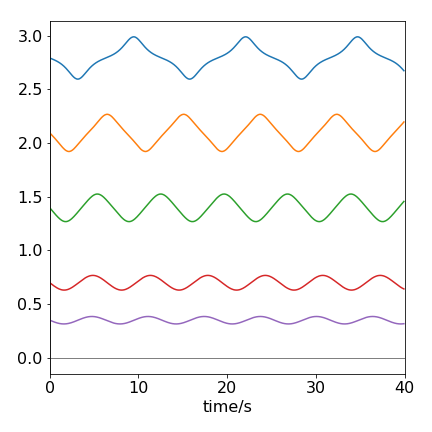 Reducing the equation of motion to two equations gives

which using algorithm 15 produces the plot shown in figure 43.

The time profile was calculated with the pendulum initially stationary at an angle of \(8\pi/9\) radians. The effect of the friction is clear; energy is not conserved in the pendulum and it eventually becomes stationary. This type of motion is called dissipative; the initial energy in the pendulum ends up as heat.

Exercise: When the initial velocity is large enough, 0.4 in this instance, the pendulum can swing over the top. Eventually it loses energy and cannot any longer do this; it then vibrates with decreasing amplitude until it comes to rest. Investigate this effect and convince yourself that rotation and damping occurs. The plot of angle vs time exceeds 180o so a correction is needed to constrain this to \(\pm\)180o. The formula \(\tan^{-1}( \sin(\varphi),\cos(\varphi) )180/\pi\) will do this. 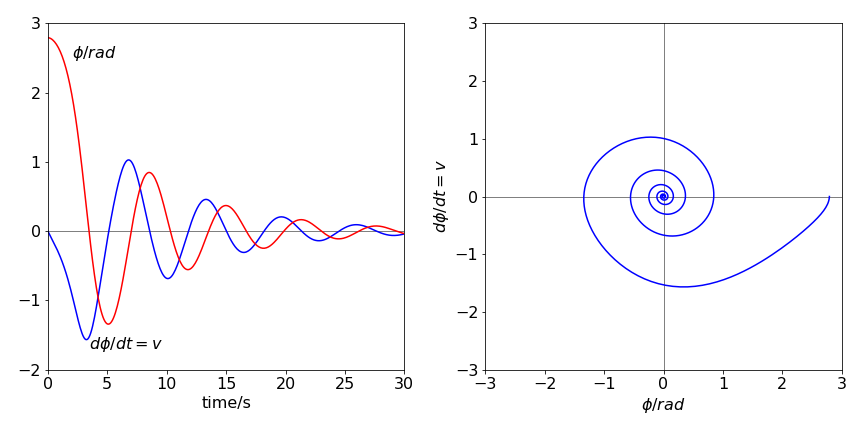 Figure 43. Left: The time profile of the angle (degrees) and angular velocity (dashed line), in rad s-1, of a damped pendulum. Right: The phase plane, angular velocity vs angle, with angle in radians.

(a) The equation is split into two parts, one describing the (angular) velocity \(v\), the other the rate of change of velocity or acceleration, and which are

In the case when the pendulum is long or \(\omega\) high, or both, then \(a/L\omega^2 \to 0\) and \(\varphi \to \pi/2\). When the opposite situation applies, \(a/L\omega^2 \to \infty\), then \(\varphi \to 0\) or \(\pi\). The first condition means that a long rod will rotate around the shaft in a horizontal plane with negligible vertical oscillation, whereas a short rod will tend to hang vertically. In between these cases, the rod will clearly oscillate up and down while rotating with the shaft.

The motion of a short rod, \(a/L \gt \omega^2\), is shown on the right of Figure 44 and is similar to that of a normal pendulum. The period of the pendulum, because it is short, is far faster than that of the shaft’s rotation, making the latter relatively unimportant. The curve for which the initial angle is \(\pi\) is the separatrix which only touches the axis when \(\varphi = \pm n\pi\) where \(n\) is an integer.

On the left of figure 44, \(a/L\omega^2 \to 0\) and is the situation when the rod is very long. In this limit, the motion is governed by the rotation of the shaft because the long rod, thought of as a pendulum has a very long oscillation period. The curve for which the initial angle is \(\pi\) is the separatrix which only touches the horizontal axis when \(\varphi = \pm (2n + 1)\pi\) where \(n\) is an integer. This means that the rod is only instantaneously stationary in the vertical position. When the initial angle is \(\pi /2\) (or 90o) a long rod does not oscillate up and down as it rotates, and its vertical velocity is zero. When the initial angle is smaller or larger than \(\pi /2\), the rod suffers vertical oscillations as it rotates, and it does not matter whether it starts almost in a vertically up or down position, the motion is eventually the same: for example \(\varphi_0 = 7\pi/8\) or \(\pi/8\). The outer sinusoidal curve in the figure above corresponds to the rod freely rotating in the vertical plane as well as rotating about the shaft because it has an initial velocity of \(1\) and an initial angle of \(\pi/8\), which together, gives it enough energy to overcome the potential energy needed to invert the rod.

which has the form of a simple harmonic oscillator with a frequency \(\omega' = \sqrt{a/L -\omega^2}\) . This produces the phase plane on the right of Figure 44.

and the cosine series

(c) Assuming that this is not the case, then changing the angle to \(\varphi -\varphi_0\), gives

This is a bit of a trick, but is the same as rotating the axis of the pendulum by \(\varphi_0\), which cannot change anything, such as the energy or period, but makes the calculation simpler. Expanding the sine and cosine

Splitting the equation into two produces angular velocity and acceleration as

The time profile and phase plane produced are shown in Fig 45; 103 data points were used with the python built in integrator \(\mathtt{odeint(\cdots)}\) but the modified Euler or Runge-Kutta method, could also be used as in Algorithm 16.

The initial angle means that the pendulum is inverted starting at \(3\pi/4 \equiv 135\^\text{o}\), and when forced by the action of the piston this angle increases with time; the pendulum crosses the vertical at a time \(\approx\) 1.25 and only partly descends to the other side before re-crossing the vertical again; this motion repeats ad infinitum. The phase plane shows this oscillation about centred about \(\pi\) radians.

Figure 45. Left: The time profile of the pendulum’s angle. The fast piston’s motion is superimposed on that of the slow pendulum. Right: The phase plane.

Using the Runge - Kutta or modified Euler methods, two time profiles of the pendulum’s angle are shown in Figure 46 with parameters from (a). Notice the difference in scale. An angle greater than \(180 ^\text{o}\) means that the pendulum is rotating. The phase plane picture is that of an increasing spiral (bottom left). Notice the irregular but repeatable motion when the pendulum is stably swinging (top). The appearance of the phase plane shows whether the motion is stable. If it spirals outwards then the motion is unstable, one example of each is shown in the figures. 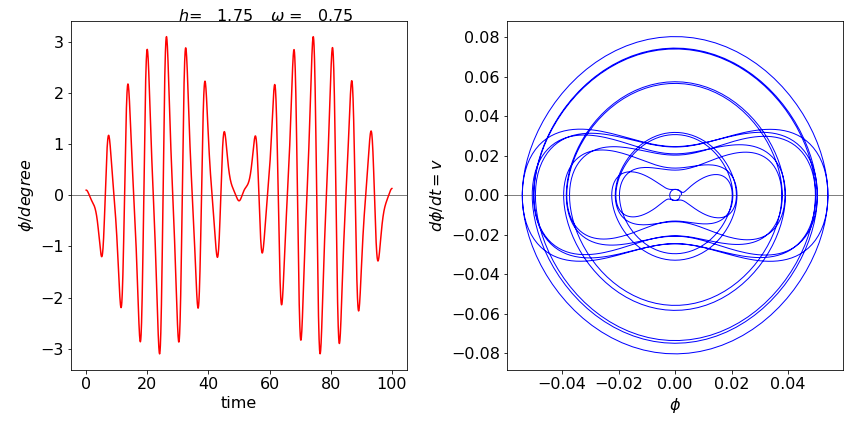 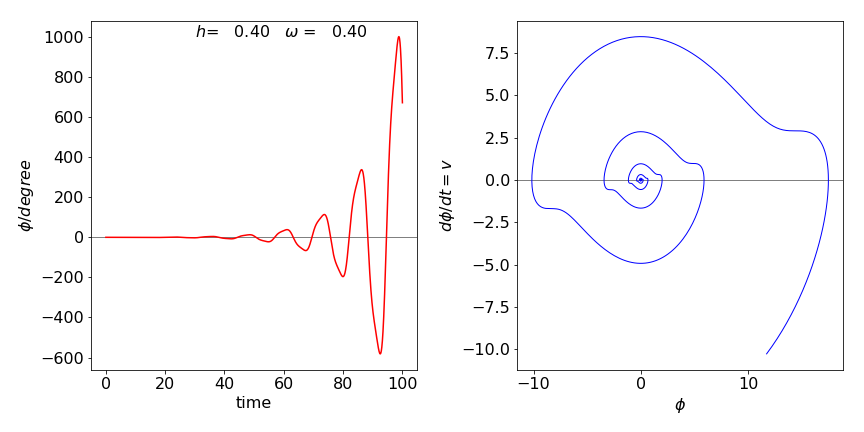 The stable or steady-state points are calculated when the derivatives of \(x\) and \(y\) are zero;

With the larger value, \(a = 10\), a limit-cycle is produced. This means that a persistent oscillation is produced from wherever on the phase plane the trajectory starts. This can be seen in the time profile, where the amplitude and period of the oscillations soon becomes constant. A (Hopf ) bifurcation occurs in the trajectory as it enters the limit-cycle; see Strogatz (1994) and also Haken (1978) for a detailed discussion of bifurcation. When \(a = 8\) no limit-cycle is possible and the oscillation in the concentrations, which are of constant period, die out and the trajectory spirals towards the equilibrium concentrations. 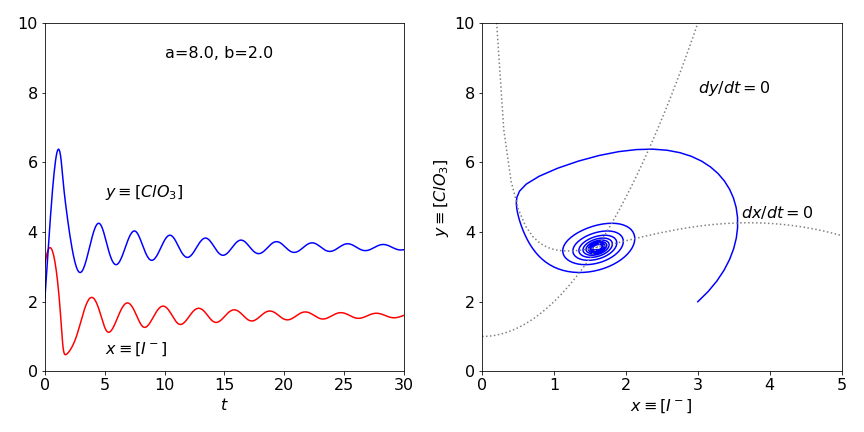 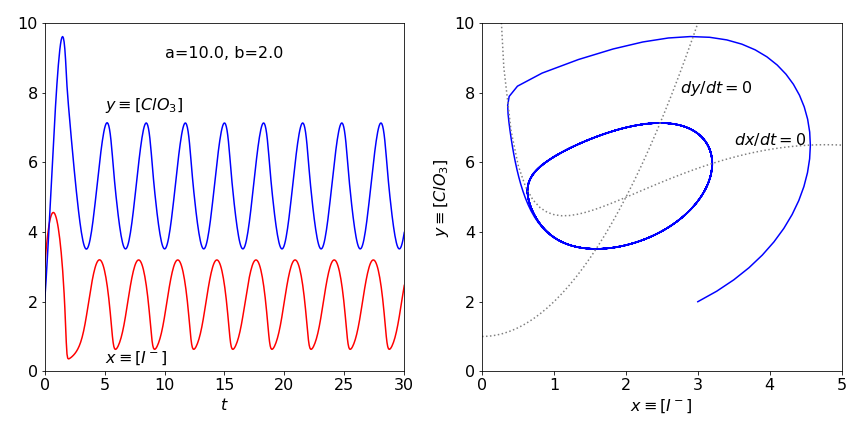