The rate equations are

which when multiplied out forms the three rate equations. The calculation produces the populations shown in figure 91, using the Algorithm outlined after figure 55. The initial population of A, falls rapidly, because \(k_{12}\) is large and \([B]\) rises rapidly for the same reason, but also reforms A because \(k_{21} = 6\). A temporary, or dynamic equilibrium is set up as may be seen after B reaches a maximum because A and B decay at approximately the same rate to form C. C decays slowly, so its population passes through a maximum. 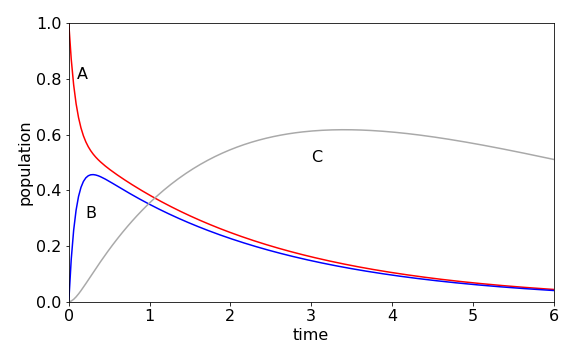 The rate equation for the fourth molecule is, with \(C_1 \cdots C_7\) being the populations of the BChl molecules, and \(k_f\) the fluorescence rate constant,

and the pattern is clear if we concentrate on the subscripts. The term in brackets, is the total loss of population from \(C_4\) by energy transfer, and is the sum of all rate constants to all other molecules. The terms are the sum of all rate constants starting with index 4, except the \(k_{44}\), which would be the rate transferring to itself, which does not make sense. The individual terms in the second line \(k_{14}C_1\) etc., are the terms describing energy transfer from other molecules onto molecule 4, so there must be six of them each of which are positive.

The matrix now looks like the one below but, for clarity, only some of the entries are filled. The dot over each of the \(C\)’s in the left column vector means that this is the derivative; \(dC/dt\).

and a shorthand notation is used in the matrix; for example,

which is the sum of all rate constants except \(k_{nn}\) which does not exist. The rate constants for each energy transfer step still need to be calculated. The distance between two Mg atoms labelled i and j is found using Pythagoras, as

The calculation is shown below. The following points are important.

(ii) an ‘\(\mathtt{if\, else}\)’ statement is used to remove this term by making it zero. Because the calculation is numerical the matrix equation has to be solved at each time point and the result is stored in the 2D array pop.

Note that when the off-diagonal terms are calculated (shown below) \(M[i,j] = kC[j,i]\) to obtain the correct rate constant. As it happens in this calculation \(k_{i,j} = k_{j,i}\) because the energy transfer from molecule \(a\to b\) is the same as \(b\to a\) therefore this ordering of indices has no effect, but if this were not true it would produce erroneous results.

Figure 92. log of time profile of populations on molecules 1 and 7 in the FMO antenna when molecule 7 is initially excited. Left: Notice how little time is needed for the energy to equilibrate. Right: When a quenching rate of \(10^{12}\,\mathrm{ s^{-1}}\) is added to molecule 1 the population decays to zero even from molecule 7, but notice the change of time scale. The population is 1 at \(t = 0\) although this may not be clear on the figure.

(a) The wide range of rate constants \(\approx 10^{12} \to 10^{10}\;\mathrm{ s^{-1}}\) is due to the \(R^{-6}\) dependence of the transfer rate with inter molecular separation. The closeness of the molecules ensures very fast transfer, and equilibration occurs within about one picosecond, irrespective of which molecule is excited initially. The population does not decay to zero, because the fluorescence rate at \(0.2\cdot 10^9\;\mathrm{ s^{-1}}\) is about \(1000\) times slower than the energy transfer rate, and on the short times range plotted the population appears to be constant. When we add quenching, which could be caused by energy-transfer to a second nearby FMO protein or to a reaction centre, the population now falls to zero in about \(20\) ps as energy is drained out of the antenna. As the energy - equilibration is so fast, it does not matter which molecule is excited even when the quenching rate is \(10^{12}\;\mathrm{ s^{-1}}\).

The calculation using Sympy is

(a) If any of the plants are cross-fertilized without restriction, the following table of all possible types is produced in the first generation where the offspring’s genetic make-up starts the rows and the parents head the columns. The total chance in each column is one, as this is the chance of parents having offspring.

Because fertilization is always with a \(BB\) plant, only the first three columns are important. The chance of growing a \(BB\) plant is

In matrix form the equations are

and therefore after \(n\) generations

If the relative populations of BB, BA and AA are initially \(1/3\) each, then the population of BB rises, because a BB plant is always crossed with one of the others. The BA population falls as the generations increase; in fact, very few generations are needed to almost completely change the genetic make- up of the plants. The AA genotype is zero, because no plants exist after the first generation. After four generations, more than \(90\)% of the plants are of type BB.

Exercise: In another experiment, the horticulturist starts with equal amounts of AA and BA plants and crosses only with BA types replacing the plants, after fertilisation, in an attempt to grow more type BB plants. Show that no more than one quarter of the plants, after many (\(n\)) generations, are of type BB and that the number of BA type plants remains the same at half the total. 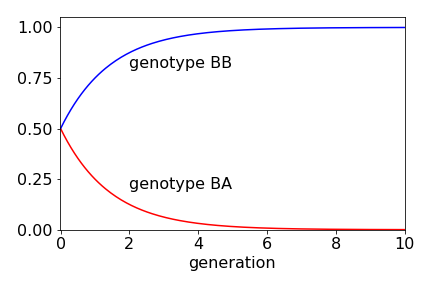 Figure 93. Change in relative population of plants containing BB and BA genes with number of generations.