To find the projection or component of a vector \(\vec A\) that lies along an axis, the dot product with one of the vector’s orthonormal base vectors is calculated. For example, to calculate the component along the x-axis the base vector \(\boldsymbol i\) is used;

is the projection of the component of vector \(A\) along the \(x\)-axis, which is the same result as obtained by trigonometry. Recall that \(|\vec A |\) is the magnitude of \(\vec A\).

The projection of \(\vec w\) onto \(\vec v\) is made in three steps: the length of the projection is the size of the vector \(\vec w\) multiplied by the cosine of the angle between them, as in figure 3.

(b) Multiply by the magnitude of \(\vec w\) to get the actual projection. This produces a scalar.

(c) Multiply by the unit vector of \(\vec v\). All this does is to make the projection vector lie in the direction of \(\vec v\).

The length of the projection is

and where the absolute values make the length positive.

The same calculation, as a projection of the force onto the direction of motion, is the vector \(P\), equation 14,

where the dot product is a scalar. The magnitude of the projection is by eqn 15,

To calculate the total work, this projected length has to be multiplied by the distance moved which is the length of vector \(\vec d = (2\boldsymbol i + 3\boldsymbol j + 4\boldsymbol k)\) which is \(\sqrt{29}\), therefore the work is \(5\) as calculated above.

The square of the magnitude

(ii) Distance on a sphere#

Calculating the distance from one point to another on the surface of a sphere is easily achieved using vectors. Figure 17a shows two points \(P\) ans \(Q\) are a distance \(d\) apart on the great circle which is the shortest path on the surface. The spherical polar angles are \(\theta\) the polar angles and \(\phi\) the azimuthal angle. If the distance \(d\) was on the Earth then a slightly different notation would be used because the latitude is the angle upwards from the equator in other words \(90-\theta\). The longitude is the angle from the \(x\) axis, (the azimuthal angle) and on earth the prime meridian is at zero longitude and passes through Greenwich in London.

relates the angle to the coordinates of the points. Note that the angle \(\omega\) is not the sum of \(\theta_1+\theta_2\); these two angles could be at right angles to one another for example. The points are \(P=[x_1,y_1,z_1], Q=[x_2,y_2,z_2]\) in Cartesian coordinates but we only know them in spherical polar ones. The conversion is found using projections onto the \(x,y,z\) axes.

and the dot product

and since \(\omega \equiv d\) the distance can be easily calculated.

If we were calculating the distance between two locations on Earth then an equivalent formula is used. First as latitude is defined as the angle towards the north pole from the equation or \(\chi=\pi/2-\theta\) cosine and sine in \(\theta\) are swapped, and secondly the latitude is usually written as the difference in longitude or \(\Delta \lambda\) instead of \(\phi\) and with these changes \(\psi \to\Delta \lambda\) and replacing the angle with \(d/R\) produces

While this equation is exact, it had difficulties in the past when computer precision was limited and still does if the numerical precision of the calculator is limited, i.e. not 64 bit or double precision. This is because for small distances \(\Delta \lambda\to 0\) and its cosine becomes very, very close to 1 and the equation returns a distance of zero because also \(\chi_1 \approx \chi_2\). In geographical terms this means a distance of \(\approx 3\) km or less will produce an inaccurate, i.e wrong value. This can be appreciated when \(\Delta \lambda\) is small because then \(\cos(\Delta \lambda)\to 1\). This changes

To correct for this numerical inaccuracy two approaches are made. First use the identity \(2\sin^2(x/2)=(1-\cos(x))\) to convert the cosine to sine and secondly simplify with \(\cos(x_2-x_1)=\cos(x_2)\cos(x_1)+\sin(x_2)\sin(x_1)\) and after some manipulation produces the Haversine formula historically used for accurate determination of distances. 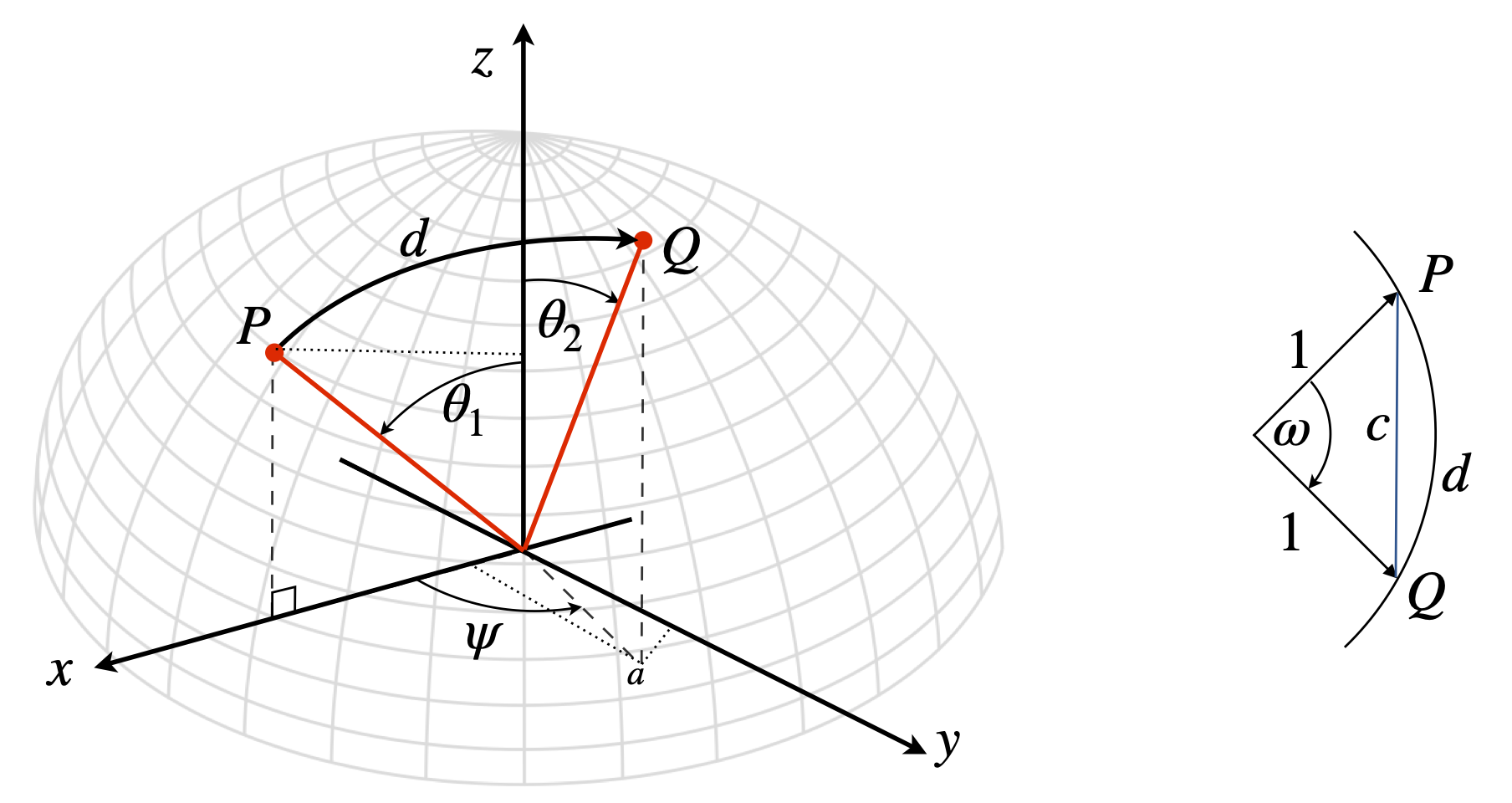 Figure 17a. Calculating the shortest distance (a Great Circle) between two points on the surface of a sphere using the dot product and spherical polar coordinates.

Because \(\vec v = a\boldsymbol i + b\boldsymbol j + c\boldsymbol k\), the direction cosine can also be written as

In matrix-vector notation, this calculation is

Taking the dot product of \(\vec v\) with itself, then the sum rule for direction cosines is found,

As an example, let us find the angles that the vector \(\vec R = 3\boldsymbol i + 6\boldsymbol j - 2\boldsymbol k\) makes with the x-axis and calculate the direction cosines for this vector. First, assume that the angles are \(\alpha, \beta\), and \(\gamma\) with respect to the positive \(x-, y-\), and \(z-\)axes, as in figure 18, as this is the convention. The dot product with unit vector \(\boldsymbol i\) produces 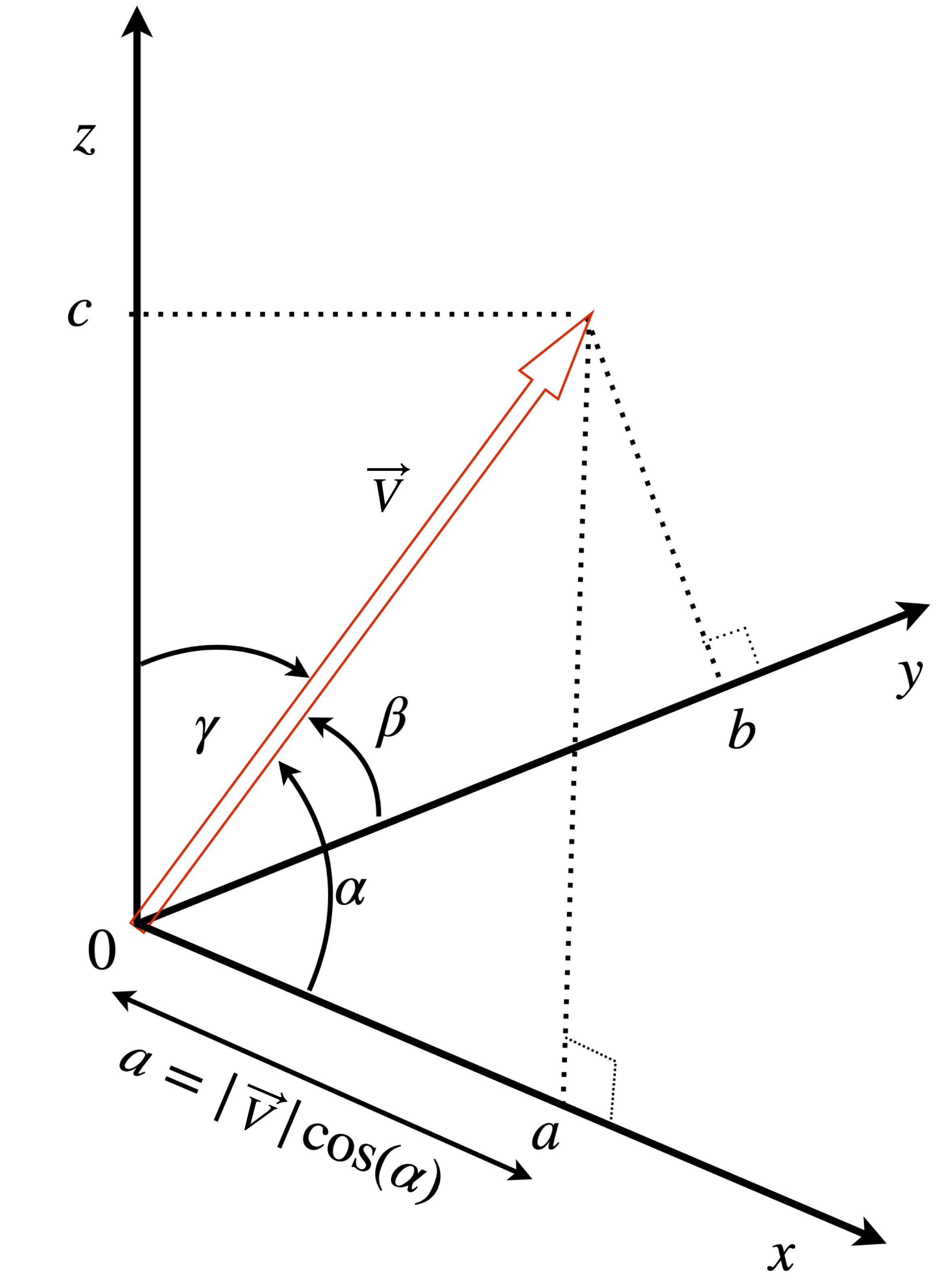