The only change that needs to be made is to replace the equation in Algorithm 1 by the new equations. The graphs are left for you to plot. 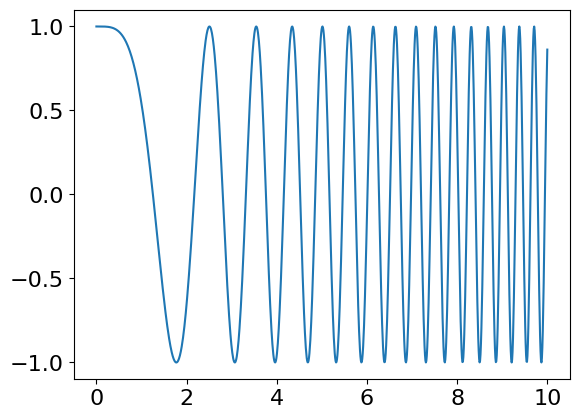 Using Python based on equation 2 the mid-point integration (algorithm 5) gives an answer about \(-207\) but this depends on the exact number of points in the integration not just how large that number is. Try several values different only by one and you will see this effect with answers grouped about about three values; \(-202, -207\) and \(-212\). The reason appears to be that close to one the points are or are not symmetrically positioned and so do not cancel out exactly in all cases. The true answer is \(-207.54\). This illustrates just how careful one has to be in numerical integration even of simple functions. Calculating in two parts, from zero to just under one and then from just over one to three can help, but in this case as the asymptote is approached very large numbers are produced which are then subtracted from one another and so rounding errors now become important. All in all a tricky numerical integration.

of which the last the is same to eleven decimal places as calculated by more sophisticated routines.

At low temperatures, \(x_m\) is large and tends to infinity; the integral is a complicated one to evaluate. The result is

Using this result the energy becomes

and at low temperatures the heat capacity varies as the cube of the temperature,

Using a mid-point integration with \(200\) points, the integral is calculated as \(1.570855\), which compares well with the algebraic value of \(\pi /2 = 1.570796\). Graphing the curve first allows an estimate of the upper limit. Making this too large leads to numerical rounding errors.

Using Simpson’s rule with \(100\) points in the integration, the results for a few ratios of energies are

When the energy is low, the ratio \(E/E_0\) is small and then the probability of tunnelling is effectively zero. Only close to the barrier top does the chance of crossing become appreciable by tunnelling alone. The calculation assumes that the molecules have exactly energy \(E\). In a molecule, this can be achieved by laser excitation of a single vibrational level when the molecule is isolated in the vapour phase. However if the molecules are thermalized a Boltzmann distribution of energies will exist. In this case, the chance of tunnelling has to be weighted with a Boltzmann distribution of energies and then integrated over all energies.

These huge differences in probability, illustrate the exponential nature of tunnelling probability, and indicate extreme sensitivity to the value of a particle’s energy, and mass and the shape of the potential.

Using Sympy the integral is