Find the enclosed area for the curves

Strategy: Plot the curve and find the angle when \(r = 0\), which will determine the limits. Use equation 19 and Sympy to calculate the area of one loop, then use symmetry to find the total area. In (b) the \(\pi/3\) is only a phase term and does not alter the area -it simply rotates the curve around the axis. This can be ignored, it is up to you, but either way the angle at \(r = 0\) has to be found for the integration limits. One way to do this is to plot the curve but not using polar coordinates. The curve crosses zero at \(r = 0\) and are the points you are looking for. (c) Try values \(n = 1, \,3,\, 5\), etc. to decide what the integration limits are and then generalize the integration and simplify it.

(b) Show that the area included between the circle of radius \(a\) and the curve \(r = a \cos(n\theta)\) is three-quarters of the area of the circle where \(n\) is an integer but not zero.

Find the area of the triangle OAB and of OQB. 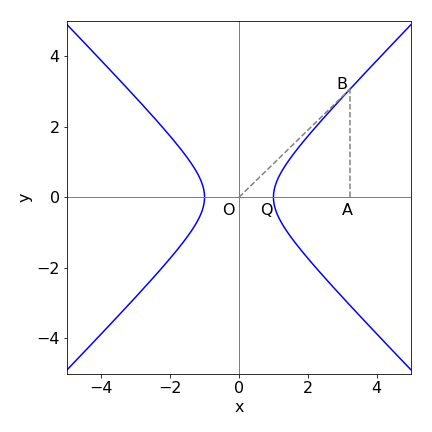 \(^*\) The normal euphony is ‘cosh theta’, and also ‘than’ for tanh with emphasis on the ‘th’, and ‘shine’ for sinh. An alternative usage is ‘sinsh’ for sinh and ‘tansh’ for tanh.

Strategy: Remind yourself that hyperbolic functions described in Chapter 1 are very similar to, but not the same as, the more familiar sine, cosine, and tangent but are easier to use than these functions because in their exponential form no complex numbers are involved.

(a) Determine what part of the curve, by plotting on Cartesian coordinates, corresponds to the inner loop.

(b) Find the area of the whole curve and

(c) that of the inner loop.

A radar transmitter has an emission pattern in the shape of the cardioid, \(r = a(1 + \cos(\theta))\). Calculate the ratio of the total transmitted signal to that transmitted backwards which is in the region where \(\pi/2 \le \theta \le 3\pi/2\).

Strategy: The ratio is equivalent to the area with an angle \(\pi/2 \le \theta \le 3\pi/2\) to that of the complete area. The cardioid is shown in Fig. 11 and the area is calculated with equation 19.

An operator will convert one function into another and this is a very familiar process. For example, the log function converts \(x\) to \(\ln(x)\) and indeed this is so common that \(\ln()\) is not thought of as an operator.

which is the differential operator

that describes the kinetic energy, plus \(V(x)\) the potential energy. The differential equation is then \(H\psi=E\psi\) where \(H\) operates on the wavefunction \(\psi\)

Suppose an operator is instead an integral and has the behaviour

and this is called the Laplace transform operator. Notice the notation: the function to be operated upon is placed inside the square brackets on the left. The variables \(s\) and \(t\) are dummy variables and any other two letters could be used instead. The formula tells us that the operator \(L\) changes \(f(t)\), a function of \(t\), into a new function \(F(s)\), a function in the variable \(s\), and which is the integral.

Follow the ‘recipe’ given by the formula and assuming that \(a\) is a constant, show that;

Use a computer algebra application such as Sympy to investigate integrals of the form \(\displaystyle \int x^ne^{-\alpha x^2}dx\).

(a) Wavefunctions can be described as orthogonal and or normalized. What does this mean? (Look this up in a physical chemistry textbook if you are uncertain.)

(b) Using harmonic oscillator wavefunctions from previous questions show by direct integration that \(\psi_0\) and \(\psi_1\) are (b) orthogonal and (c) normalized.

Strategy: Two wavefunctions are orthogonal if the product of their integral over all coordinates is zero. If wavefunctions are normalized and orthogonal, they are called orthonormal. A normalized wavefunction means that \(\int_\infty^\infty \psi^2 dx=1\) which is interpreted as meaning that the nuclei of the vibrating molecule exists somewhere among all possible values of x. This is common sense. Summarizing: \(\int_\infty^\infty \psi_i\psi_j dx=\delta_{i,j}\) where \(\delta_{i,j}\) is the Kronecker delta function defined as \(\delta_{i,j}=1 \) if \(i=j\) otherwise \(\delta_{i,j}=0 \).

In an SIS type of disease an individual is either susceptible \(S\) or infected \(I\), for example the common cold. Such infections do not give immunization upon recovery from infection, i.e. there is no long lasting immunity and individuals become susceptible again, typically after a few months. The scheme is

and where \(N=I+S\) is the total number of individuals (Britton 2003). When there are very few infected individuals, \(S \approx N\) and the incidence \(n\) of the disease, which is the rate of new infections, is \(n = k_1NI\) and can be shown to be the convolution

In any molecule the electronic wavefunctions are orthogonal to one another. In an electric dipole transition, a photon is absorbed and when this is polarized in the x-direction the probability of absorption is \(|\langle \mu x\rangle|^2\) where

and \(\mu_x\) is the transition dipole moment. This is an ‘odd’ function of \(x\) because it is proportional to the displacement of the charges. The wavefunction has quantum number \(i\) in the initial state and \(f\) in the final one. The * indicates the complex conjugate.

Show that the symmetry of the initial and final state cannot be the same in an allowed transition.

The transition dipole for a vibrational transition observed in the ground state of a molecule, is

(b) Calculate the transition moment for a vibrational transition from level \(i \to f\) using the wavefunctions in Q39. Choose suitable \(i\) and \(f\) values.

Q44 Voltage across a membrane#

The flux equation is the sum of two terms: one is from the flux due to the concentration gradient across the membrane, by Fick’s first law this is \(-Ddc/dx\), and the other term is caused by the applied voltage itself \(-(zFc)dV/dx\). Multiplying \(J\) by \(zF\) converts flux into a current per area (units A m\(^{-2}\)),

(c) Integrate both sides of this last equation separately with respect to \(x\) from \(x = a \to b\). Do not forget that the concentration depends on \(x\) and thus the concentration becomes \(c_a\) and \(c_b\). When integrating the left side, use \(V = Ex\) where \(E\) is the electric field and is a constant.

(d) Simplify the resulting equation to find the current \(I\). The final step produces an expression in \(E\) and you need to know that the electric field is proportional to the voltage difference and this can be changed to \(E = \alpha \Delta V\) where \(\Delta V\) is the difference in voltage over the fixed distance \(a \to b\).

Strategy: (a) Look up the SI units of voltage, Faraday constant, and so forth and substitute into the equation. In (b) to ‘show’ or verify does not mean ‘prove’ so start from the answer given and work back.

In a medium of relative permittivity or dielectric constant \(\epsilon\), the force between two ions of charges, \(q_,\,q_2 \) separated by \(R\) m is

(a) Find the work to move a sodium ion and a chloride ion from infinity to within \(r_0\) of one another and evaluate it if their final separation is 1 nm and the medium is water, \(\epsilon = 80\).

(b) What would the energy be if the solvent has a dielectric constant of 2?

(c) Explain in physical terms why there is such a difference in values. What does this imply for dissociation of the salt in a very dilute solution of each solvent?

Strategy: Because dimensionally energy = force \(\times\) distance, the work done or its equivalent the energy required, is the integral of the force along the path followed by the ions from infinity to some given separation.

A spherical ion of radius \(r\) and charge \(q\) in a medium of dielectric constant \(\epsilon\) can be considered to be a capacitor with capacitance \(C = 4\pi\epsilon_0\epsilon r\) and its potential is by definition \(q/C\) volts. The work required to increase the charge by \(dq\) is \(dw = Cq dq\) and the total work required is the integral when the charge increases from \(0 \to q\).

(a) Calculate the total work to charge the ion.

(c) Estimate the rate constant for this process if the pre-exponential factor is \(10^{12}\;\mathrm{ s^{-1}}\). Comment on your result and consider whether it is possible to pass an ion directly through a membrane at 300 K.

The Maxwell - Boltzmann distribution describes the distribution in the speed, \(u\), of gaseous molecules in three dimensions as

where \(m\) is the mass (in kg) of one molecule, \(k_B\) Boltzmann’s constant, and \(T\) temperature (K). Use Python/matplotlib/Sympy to plot the equation and to perform integrations.

(a) Show that the speed distribution is normalized.

(d) Calculate the fraction of molecules with energy \(\gt k_BT\) by converting the equation from velocity to energy and calculate \(\displaystyle \int_{k_BT}^\infty P(E)dE\) using \(E=mu^2/2\).

Strategy: Normalizing the function means making its total area equal to unity, hence an integration is needed, \(\int_0^\infty P(u)du = 1\). The integral starts at zero because negative speeds are not allowed. Speed, unlike velocity, is not a vector quantity and is always positive because the direction in which a particle is moving is not important it its calculation. Modify the integration in part (b) to start at speed \(u_0\) instead of zero. When using Sympy it is often useful when defining variables to use positive = True as in

(a) If two cylinders, one containing He and the other N\(_2\) gas, had their gas released on the surface of the moon which is at an average surface temperature of approximately \(380\) K, what fraction of each gas has enough velocity to escape the effects of gravity?

(b) The escape velocity on earth is \(11200\mathrm{ m\,s^{-1}}\). Repeat the calculation in (a) at \(1400\) K, the approximate temperature of the earth’s atmosphere at an altitude of \(100\) km. (It is arbitrarily assumed that the gas has so few collisions at this altitude than once a molecule has enough speed it will escape gravity.) Is it possible to conclude that this high temperature is the reason that there is so little He in the atmosphere (\(\approx 5.2\) ppm at sea level) even though He is produced continuously by radioactive decay in rocks?

(c) Calculate the fraction of molecules at an altitude of 100 km where ionization can occur and ions may be constrained by the earth’s magnetic fields and re-examine the result of the previous two parts.

Strategy: (a) and (b) use the formula developed in the previous question for the fraction of molecules having a speed greater than a given value. (c) Use the Boltzmann distribution to calculate the fraction of atoms and molecules at a given height. The potential energy of a mass \(m\) is \(mgh\) at altitude \(h,\, g\) being the acceleration due to gravity.