The derivative with respect to frequency is

This result means that if you can measure the frequency or the wavelength of maximum intensity, the temperature can be estimated, but this would not be as accurate a result as fitting to the whole distribution curve. Pyrometers work on this principle.

(a) By differentiating \(f\) and substituting into the compliance, gives

(b) Because the compliance \(h\) is a constant,its derivative is zero and the equation to solve, called \(g\) so as not confuse this with the force, simplifies to

The initial value of \(x_u\) has to be guessed; something larger than a bond length seems sensible, so try \(0.5\) nm to begin with. Using the code given in the text to locate the root of the equation, at least \(25\) iterations are necessary to converge to \(x_u = 0.208\) nm. Plotting the equation first, it is seen that the true value is about \(0.2\) nm and starting there far fewer iterations would be necessary.

The equation for material balance on species \(A\) is

and balancing charges is

which can be rearranged to give the equation in the question.

(b) Using the values in the question, the equation to solve for \(x\) using the Newton - Raphson method is the cubic

and as we have no idea what the answer might be we solve numerically and the result is \(\mathrm{pH} = 4.7\). However, the acid and base concentrations are far larger than that of \(\mathrm{[H_3O^+]\; [OH^-]}\) and so some approximations can be made.

The solution is \(0.1\) M ammonia solution with \(K_A= 10^{-9.25}\). Had the base constant been given instead we could convert as \(K_w=K_AK_B\) but we can start with the full equation given in the previous question. This can be solved using the Newton-Raphson method but is not needed in this case.

As ammonia is a base we may suppose \(c_a \approx 0\) then from equations in the previous question,

(a) The solution is found by the Newton - Raphson method with the function defined as \(\tan(\beta)-\sqrt{\alpha^2-\beta^2}/\beta\) for even parity levels and \(1/\tan(\beta)+\sqrt{\alpha^2-\beta^2}/\beta\) for odd parity. The derivatives can be worked out using the product rule or using tables. A code snippet of the Newton - Raphson algorithm is shown next

The figure shows the functions and the crossing points for two the values of \(\alpha\). The even parity roots are found only on the positive branch of the tangent; the odd on the negative. There are no odd solutions less than \(\pi/2\) so the lowest value is always that for a even parity state. 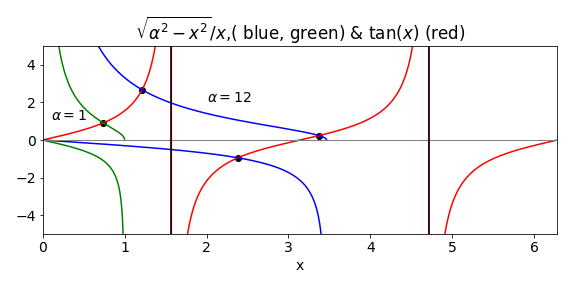 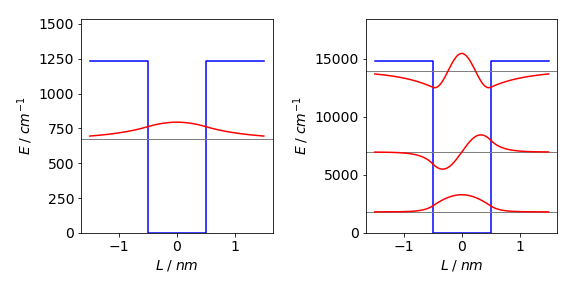 Figure 58a. The potential and their associated energy levels and wavefunctions. On the left the energy is \(-1230\,\mathrm{ cm^{-1}}\), on the right \(12\) times this value. The even-odd parity of the wavefunctions is clear.

The \(n^{th}\) energy level for an infinite well has energy

and the first is at \(3032 \,\mathrm{ cm^{-1}}\), over four times higher than the energy in our finite well. The finite height of the well clearly lowers the energy levels by a great amount and, because the wavefunction can spread into the classically forbidden region, effectively making the well wider and so lowering the energy levels.

Photon absorption by such a quantum well can only occur into the continuum energy region above the well top. The onset of absorption is in the infrared spectral region at approximately \(560\,\mathrm{ cm^{-1}}\).

this can be simplified to

The maximum is found when 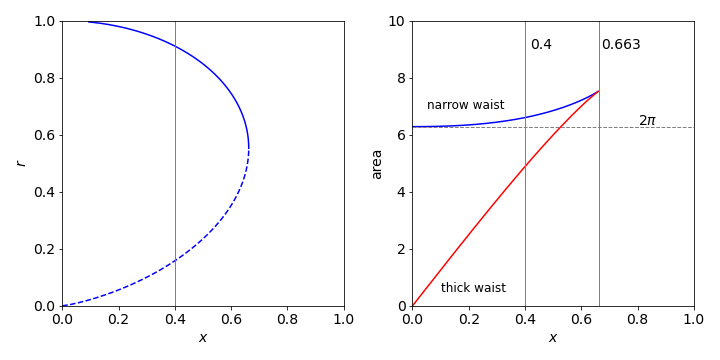 Using SymPy to do the integration gives

The calculation shows that if the separation of the two rings is \(\pm 0.4\), with ring radius of \(1\), then the thick waist \(r = 0.910\) is the stable form of the soap bubble because its area is smallest and the surface tension is proportional to the area so the energy needed to form this film is less than that of the other one. The film with the narrower waist has the larger surface area; this will spontaneously form one of the other two surfaces because it is in a metastable state. To get directly to the film with the smallest surface area is going to be difficult in practice. The transition has to be made faster than the film on each ring can be formed. This will depend on the physical properties of the liquid film forming the bubble. If the separation of the rings is greater than approximately \(0.52\), the line previously of minimum area is now greater than 2\(\pi\) and the wide waist of the film will be unstable as it no longer has the minimum area and it will spontaneously burst.

(a) The derivatives are

which can be simplified a little to

and this can be made into an algorithm.

The table shows the position of the Earth in 2019 at the equinoxes and solstices.

The next figure shows the orbit and solstices and equinoxes, together with the foci of the elliptical orbit, black dots close to the centre and the sun as a slightly larger (orange) circle which is not to scale. 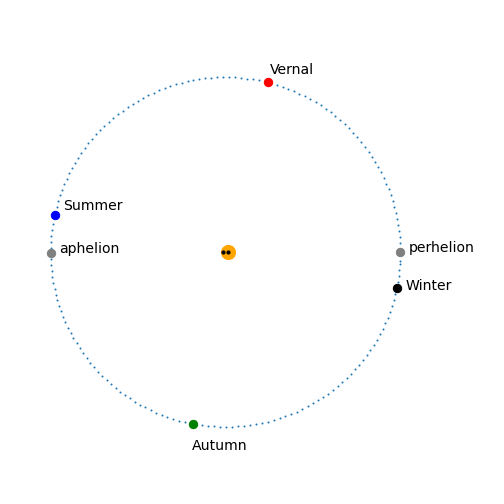 Figure 59a. The Earth’s orbit with the solstices and equinoxes. For clarity, the dots show the position of the Earth every second day. The eccentricity is very slight and the foci are barely distinguishable from one another on this scale being only \(\approx 5\) million kilometres apart.