Sine and cosine functions are almost mirror images of one another when differentiated, 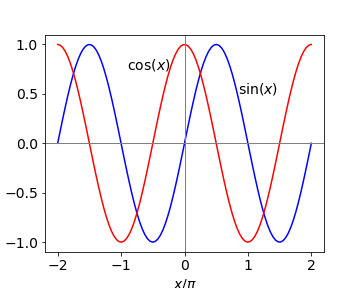 3.10 Other trig functions, tan, sec and hyperbolic functions sinh, cosh and their inverse.#

There are many other trigonometric and closely related hyperbolic functions besides sine and cosine, and most can be treated by the differentiation methods described in the next few sections based on basic differentiation. One useful way is to convert to the exponential form first. Sine and cosine can easily be differentiated this way, then converted back to a trig form. A tangent, for example, is the ratio of sine/cosine and is treated as a ratio. Others functions such as sec(x) which is 1/cos(x) can be treated as a function of a function, Section 5.1, either in the trig or exponential form. The hyperbolic functions cosh, sinh, and tanh also have exponential representations.

The final result is

The Pythagoras right-angled triangle can also be used to convert between trig functions. See Chapter 1.5 and a table of many functions is given in section 4.17.

Differentiating logarithms always has the form: ‘derivative divided by the function’.

Differentiating \(\ln(y)\) with respect to \(x\) produces a most useful form, which is worth remembering

The van’t Hoff equation of chemical thermodynamics has this last form,

This equation describes the change of an equilibrium constant \(K_p\) for a reaction carried out at constant pressure with temperature \(T\) and quantifies the Le Chatelier principle. \(\Delta_rH^{\mathrm{o}}\) is the standard molar enthalpy of the reaction. In this form it is easier to plot or integrate wrt.temperature.

and then divide by \(U\) and use eqn 11, substitute back and simplifying gives

A factorial is defined as \(x!=x\cdot(x-1)\cdot (x-2)\cdots 2\cdot 1\) where \(x\) is an integer, thus this function cannot be differentiated. Factorials occur most commonly in evaluating probabilities such as the binomial coefficients

and sometimes it is necessary to determine the maximum of a distribution containing this term, which thus requires differentiation.

Fortunately, for large \(x\) Stirling’s Rule can be used which is

where \(x\) is now a variable. Differentiating the log produces

substitute for the factorials using Stirling’s formula, differentiate and set the result to zero.

and the maximum (or minimum) is found when the derivative is zero which can only be when \(\ln(x)=\ln(n-x)\) or \(x=n/2\). This can only be a maximum because the distribution is always positive and can be confirmed by direct calculation or plotting values. See Pascal’s triangle and Binomial distribution in Chapters 1 and 12.

Occasionally it is necessary, or simpler, to find \(dx/dy\) rather than invert the equation to put it in terms of \(y = \cdots\) and calculate \(dy/dx\). The derivatives are related as double reciprocals;

If you are unfamiliar with integration, it will help to know the basic rules; see Chapter 4. It is possible to differentiate integrals; well why not! Integration and differentiation are linked as shown in equation (1) and as given by the fundamental theorem of the calculus:

\(a\) being a constant and \(F\) is the result of integration. The variable \(u\) used in the integration is a dummy variable, any letter could be used instead, but it is better in this instance not to use \(x\) as this can be confusing. In this formula at least one of the integration limits must be a function of \(x\) as explained next.

Differentiating the integral with two limits both of which are constants, i.e. simply numbers \(a\) and \(b\), produces a result of 0, because integration with such limits produces a number, e.g. the area under the curve from \(a\) to \(b\), see Fig. 1, and the differential of a constant is zero,

In the more complex and general cases, where the limits \(u\) and \(v\) are themselves functions of \(x\), the function of function rule is used (Section 5.1),

which is also called Leibniz’s Rule. An example where \(x^2\) is one of the limits is,

The aim in differentiating integrals is not to work out the integral first, which might not be possible anyway, and then differentiate the result, but to use equation (15), which avoids doing this.

One interesting, but rather sophisticated example of differentiating integrals occurs when finding the distribution of nearest (closest or first) neighbour molecules in a solution, Chandrasekhar(1943).

This looks hard to solve because \(w(r)\) is also inside the integration, so it is necessary to isolate the integral first (by dividing both sides by \(4\pi r^2 n\)) and then differentiating both sides to find

In the next step we multiply the rhs. by one by multiplying top and bottom by the same term,

The shape of \(w(r)\) can be worked out just by looking at it. The term in \(r^2\) causes \(w(r)\) to increase and the exponential to decrease, thus we expect it to start at zero reach a maximum and fall off to zero at large \(r\). Physically this is what one might expect, no near neighbour will be at at zero distance and none either at very large distances because they are all present at some shorter distance. 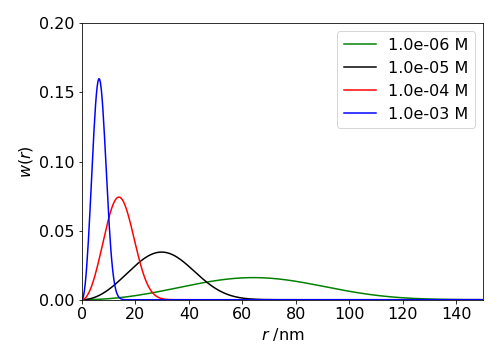 Figure 5a. Probability of a nearest neighbour \(w(r)\) at various concentrations.

After differentiation with respect to \(x\), \(x\) is treated as a constant because integration is in \(y\). For example,

where differentiation is with respect to \(a\) and not \(x\). The partial derivative symbol \(\partial\) is used inside the integration sign to specify that only \(a\) in this case is to be differentiated.

The general result for the \(n^{th}\) derivative of \(x^m\) is \(\displaystyle \frac{d^ny}{dx^n}=\frac{m!}{(m-n)!}x^{m-n}\) which can be generalised if \(n\) is a fraction by changing the factorials to gamma functions as \(n!=\Gamma (n+1)\) thus \(\displaystyle \frac{d^ny}{dx^n}=\frac{\Gamma (m+1)}{\Gamma(m-n+1)}x^{m-n}\). As many functions can be expressed as power series it is possible to fractionally differentiate these. However, these unusual derivatives need not have more than a curiosity interest for us; they appear in Morse’s paper on the anharmonic oscillator (P. Morse, Physical Review, 34, 57, 1929) and hardly anywhere else.

3.17 Table of the differentials of some common functions.#