The transform equation is

which can be integrated directly to give

which is the shape of the spectral line.

Figure 54. An exponential decay and (right) the complex conjugate square of its Fourier transform which is a Lorentzian curve.

The widening of the spectral line with a shortening of the excited state lifetime, is sometimes considered an example of the ‘time-energy’ uncertainty principle, but this is not the same as the Heisenberg uncertainty principle. Spontaneous emission is caused by coupling the excited state to the states in the ‘vacuum field’, which have energy levels capable of being filled with photons in a similar way to how electronic energy levels can hold zero, one or two electrons or vibrational or rotational energy levels contain their respective quanta. The difference is that any number of photons can be contained in each of the energy levels because photons are bosons: rather like buses, they like to go around in groups.

The energy levels in this vacuum field fluctuate and so the coupling between these states and the excited state varies which causes the transition to have a real width. If, in addition, the excited state is short lived due to interactions within the atom or molecule or with other nearby species, or with external electric or magnetic fields, this also leads to fluctuations in the atom’s energy levels and the greater these interactions are, the shorter the lifetime and the wider the energy width. This is called lifetime broadening. However, the average energy is always at exactly the transition frequency, and in our example, this is zero because the energy of the excited state above the ground state has not been specified.

The Heisenberg uncertainty principle arises because operators, such as position and momentum, do not commute, but in quantum mechanics time is not an operator, but an observable, therefore commutation does not apply. See Atkins & Friedmann (1997, p. 198) for a detailed discussion of the distinction between Heisenberg uncertainty and time-energy uncertainty.

which, being exponential, is easily integrated to

The square of the absolute value is obtained by multiplying the complex conjugate \(g^*\) with \(g\): 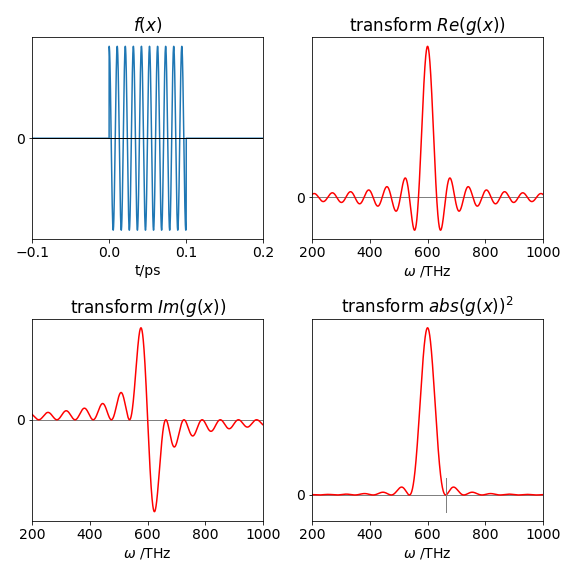 Figure 55. Left top: The electric field of a square pulse of 0.1 ps duration. Bottom right: the square of absolute value of the Fourier transform of the pulse; this is its spectrum. The small vertical line shows the position of the first minima, see part (b). Bottom left: The imaginary component of the Fourier transform, the sinc function, and right, the real part.

(a) As the pulse is square and of finite duration, it lasts only from time 0 to \(\tau\), therefore its Fourier transform is

which is similar to that in Q8 but with the change \(\omega\rightarrow \omega_0-\omega\).

(a) The FID is caused,in a semi-classical interpretation of NMR, by the rotating magnetization cutting the wire coil of the detector, and inducing the current that is subsequently detected. The two different classes of spins move with different frequencies due to their different chemical environments, and hence, experience slightly different magnetic fields. These are the two cosines mentioned in the question. The decay of magnetization is due to the interaction of the spins with one another, with other atoms in the molecule and with dipoles in the solvent. These interactions have the effect of transferring more spins from the upper spin level to the lower one, than in the opposite direction, and hence back towards equilibrium. These effects cause the population to decay with a lifetime T1, and the loss of the spin coherence determines the T2 lifetime. The \(\tau = 100\) in the question represents both these decay processes. In a real experiment the decay time would be of the order of a few seconds and the frequencies in MHz.

(b) Using the FID equation given in the question the Python code below can be used. You should modify this as you wish. 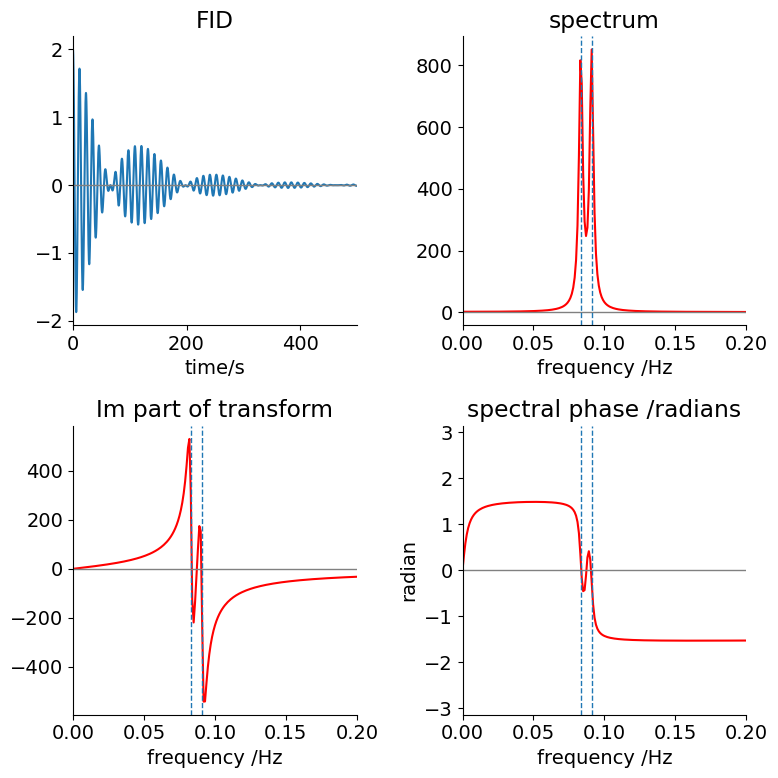 which can be evaluated by hand or using SymPy. By hand this is made easier by converting the sin to exponential first. 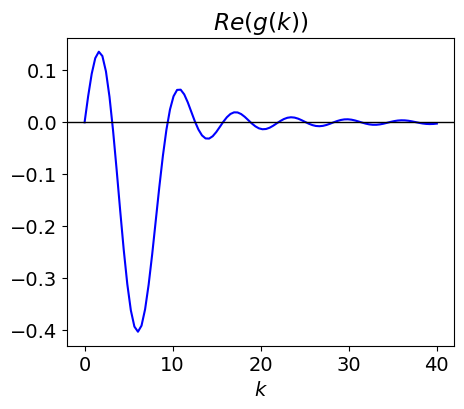 (a) The Fourier transform of the \(\delta\)-function is obtained directly by using its selecting property. For instance acting on a function \(f\) gives,

and no integration is necessary, therefore

(b) The Gaussian function has the transform

The transform is itself a Gaussian, but in transform or \(k\)-space, which is in this case reciprocal distance, the products \(kd\) and \(ka\) are dimensionless. The scattering intensity is \(\displaystyle P_k^*P_k = e^{-kd^2/2}\). As with the \(\delta\) function the scattering is the same in all directions because the power density does not depend on \(x\). However, the power density now depends on the width of the Gaussian, the more spread out it is, hence large \(d\), the smaller is the scattering. In the limit that the Gaussian becomes very narrow, it approximates the \(\delta\)-function.

The probability density is simply the square of this because \(P\) is real, and shows that the scattering depends on the separation of the centres being maximal when \(ka=\pi n\) if \(n\) is an integer.

The total transfrom \(\chi\) is therefore the sum of many of these terms, each term contributing \(\displaystyle e^{-ikna}/\sqrt{2\pi}\) to the sum, hence for all positions,

and because of the selecting property of the \(\delta\)-function it is not necessary to evaluate the integral as \(\displaystyle \int f(x)\delta (x-a)=f(a)\).

At this point we need to decide what relative phases the X-rays can have. If this is left undefined then the summation turns out to be zero, because if the waves can have any phase whatsoever when they scatter, then they are on average, out of phase with one another, and add up to zero. To show this using standard summations (Chapter 5, Table 1) the summation can be split into two parts, one with \(n\) from \(-\infty \to 0\), the other from \(0 \to \infty\). The term with \(n = 0\) is then subtracted from the total as this is counted twice. The summation, however, comes to zero after one of the extra \(n\) = 0 term is subtracted.

An alternative, and more intuitive, way of performing the summation, is again to start with

Next, by defining \(ka = 2\pi m\), where \(m\) is an integer, means that a wave with wavevector 2\(\pi\)/a will be exactly in phase with the next atom, and two such waves in phase between the next neighbouring atoms and so forth. The quantity \(k = 2\pi m/a\), often called the wavevector, has units of reciprocal distance. The summation becomes

and is finite for each integer value of \(m\) and the cosines are all integer multiples of 2\(\pi\) and are therefore unity. This means that the transform is a series of spikes at \(m/a\), or at fixed intervals of 1/\(a\), in reciprocal space. In practice, the scattering due to a one-dimensional comb of atoms depends on the angle of incidence of the X-rays and the Bragg condition. The scattering forms a cone with its apex on the atoms.

This calculation can be extended to two or three dimensions and to other patterns of gaps between ‘atoms’. In three dimensions, a similar calculation illustrates that the process of diffraction, or scattering in X-ray crystallography produces data in reciprocal space.